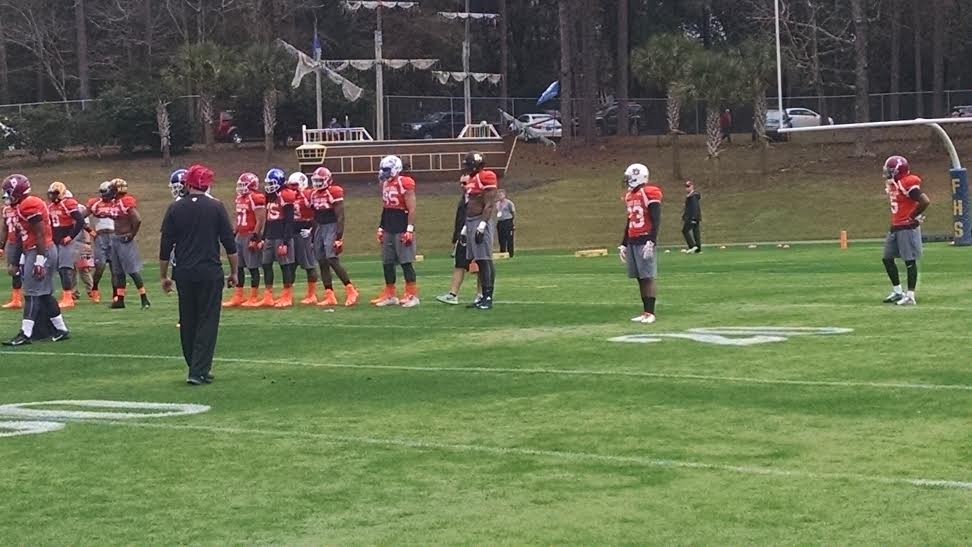 Full disclosure. This post will be about things not related to the players I watched, and me just trying my hand at some prose and trying to sound insightful. Based off the generic title I even struggled to come up with, we’re not off to a good start.

The week down in Mobile was one of the most thrilling I’ve had. Maybe that’s because I’m a blogger and am usually excited when there’s an extra Bagel Bite in the box, but still, in a vaccum, Mobile is awesome. The city is pretty, the weather was warm(ish), the people who live there couldn’t be nicer. I’m not one for serious introspection but after this week, it’s worth reflecting.

Football aside for a moment, it was my first time on a plane since I was three. Big airport. Big airplane. Small Alex. It was a little nerve-wracking. But it was fine, and even fun. I know it’s just a flight, and if you travel or work, you’ve been on one a million times, but you still have to sit back and appreciate it. The first flight was barely 100 years ago and now you can fly coast to coast in a couple hours.

Like Louis CK said, you’re in a chair in the sky. And that is pretty awe-inspiring.

To the week itself, that environment in Mobile is nearly impossible to replicate. Unless you work for a football team, you’ll never feel it. Walk into the hotel on Monday to pick up your credentials and you reach the second floor, a room buzzing with scouts, players, and coaches. I wrote about it in my report but every conversation is football. It’s another world, another dimension, and even though I attended for only five days, it felt a little weird coming back. Sitting in the Charlotte airport on the trip back, I saw someone wearing a Pittsburgh Steelers’ jacket. My mind immediately jumped to, “Oh, he’s a scout.” Of course, he wasn’t, just a regular guy, but that’s what you get used to seeing in Mobile for the Senior Bowl.

The intimacy of it is hard to replicate. You’re intertwined with coaches and scouts. One friend stood between John Harbaugh and Dan Marino. I stood in line Monday for my credentials and hear someone politely say excuse me to my left. I half-spin around and it’s Jason Garrett. That was crazy to me but the normal for those who experienced it before.

The football itself, watching practice, talking to the players, goes without saying. It was incredible. It’ll be difficult to forget, not that I want to, being able to hang out and watch football for three straight days, sun up to sun down.

But above all, the most important takeaway, what has the longest shelf life, is meeting the people I did. All of them, too many to name, wonderful people. What stuck out the most was obvious but just as valuable: their knowledge and their work ethic. I was fully aware of how much more I had to learn, and I love the chase, but this week just made that desire and flame burn brighter. To read more, listen more.

And I mean that latter point in several ways: to listen to more podcasts, videos, but also to shut up and listen to other thoughts without feeling compelled to give my own. It’s a lost art with Twitter. It’s a great tool to learn and communicate but it’s just a free-for-all, each person looking to one-up the next. It begins now but I’m geeked to soak up as much information in the offseason, during the dead of summer, when I’m afforded that kind of time.

I don’t mean to get on my soapbox here, but these are the thoughts that will stay with me. Working harder, working smarter, with a better process and organization. Certainly not changes anyone makes in a day, it’s an ever-extending mountain, not a hill to climb, but one that will continue to be fun to attack and improve.

Until next year, Mobile. I can’t wait.