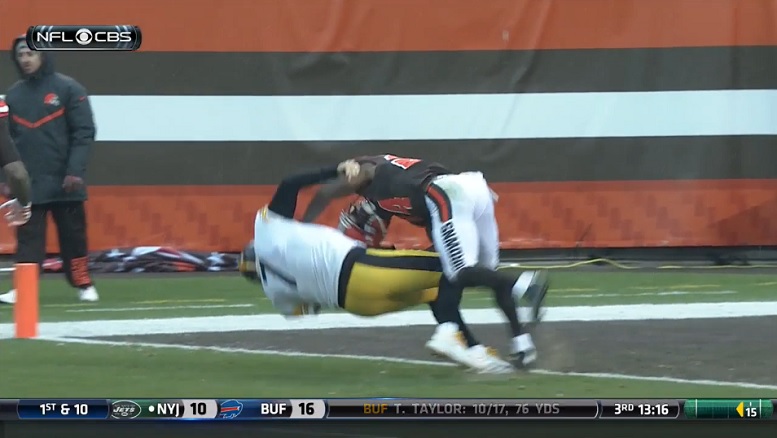 In case you missed it Sunday, Pittsburgh Steelers quarterback Ben Roethlisberger got into a little skirmish with Cleveland Browns safety Johnson Bademosi following his second interception of the game early in the third quarter.

After the two players engaged in a little bit of hand fighting at the end of the return by Craig Robertson, Roethlisberger attempted to end things with what looks like a DDT, a famous wrestling finishing move. As you would expect, several of the Steelers offensive linemen quickly came over to police the situation and Roethlisberger nonchalantly got up and walked off like nothing happened.

As many if you know, Roethlisberger is a huge wrestling fan and has even appeared as a guest on WWE Raw.

Here’s what CBS analyst Trent Green had to say about Roethlisberger’s exchange with Bademosi.

“That’s just a quarterback with frustration right there,” started Green. “Believe me, I’ve been there. You’re trying not to get blocked and all of the sudden the next thing you know you’re trying to rip the guys helmet off.”