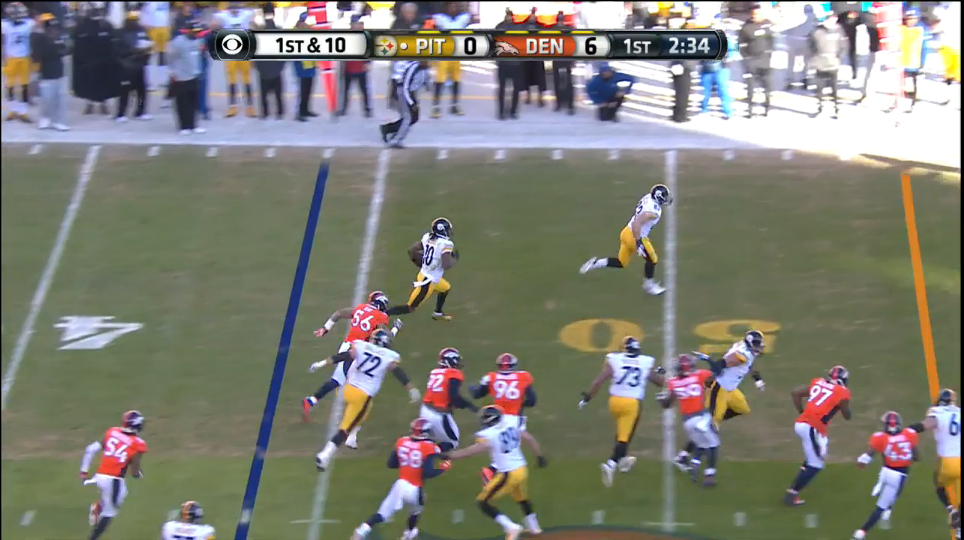 It was a heartbreaking end to their playoff run, but the effort that the Pittsburgh Steelers turned in Sunday against the Denver Broncos in the AFC Divisional Round was better than expected.

Coming in shorthanded offensively and banged up across the board after a knockdown, drag-out brawl in the Wild Card game against the Cincinnati Bengals, the Steelers nearly pulled off the upset against Denver.

Unfortunately a Fitzgerald Toussaint fumble led to a CJ Anderson touchdown and Demaryius Thomas two-point conversion, allowing the Broncos to move on to the AFC Championship Game against the New England Patriots.

Much like we have all season, we broke down the film to hand out grades for each position on the Steelers.

Despite coming into the game expecting to be limited with a shoulder injury he suffered against the Bengals last week, Ben Roethlisberger was very effective for the Steelers, throwing for 311 yards on 9.2 yards-per-attempt, becoming the first quarterback in the NFL to throw for 300 yards against the No. 1 defense in football twice in one year.

On the first play of the game Roethlisberger showed the Broncos that his shoulder wouldn’t be an issue, uncorking a 60-yard pass down the field trying to catch the Denver secondary off guard.

Although most of the passing yards Roethlisberger racked up on the day came from yards after the catch by Martavis Bryant, Darrius Heyward-Bey and Sammie Coates, who each had some impressive moves in the open field after Roethlisberger found them in space.

Unfortunately, Roethlisberger wasn’t able to get the ball into the end zone through the air, which might have ultimately done in the Steelers in the loss.

I’m not going to crush Toussaint for the costly fumble in the fourth quarter, so if you were expecting me to in this space, I suggest you stop reading this section and move onto the receivers section.

If you stayed with me: thank you. Let’s remember that a big reason the Steelers were ultimately in this situation on the road against Denver was because of the play from Toussaint out of the backfield in the Wild Card game and early in the game against Denver.

For a guy who was on practice squads for much of the year, Toussaint showed me that he has a spot on the 53-man roster after training camp next season.

The fumble was a big swing in the game, but let’s remember he was the third running back of the season for Pittsburgh.

Before the fumble Toussaint had a strong game, rushing for a touchdown in the first quarter one play after a nifty 15-yard run to put the Steelers at the one-yard line.

The second-year running back out of Michigan wasn’t a serious factor in the passing game, hauling in just three passes for two yards, but he was able to rush for 39 yards and a score on 12 carries.

Jordan Todman didn’t do much to help the Steelers in the running game, adding just six yards on five carries one week after rushing for 65 yards on 11 carries against Cincinnati.

Bryant added a huge run on a reverse, picking up 40 yards thanks to big blocks on the perimeter by Heyward-Bey and Heath Miller, who served as the pulling blocker on the reverse.

A huge day by Bryant (nine catches for 154 yards on 15 targets) helped offset the loss of Antonio Brown, but the Steelers receiving corps was unable to find the end zone against the top pass defense in all of football.

Bryant had a huge 52-yard catch-and-run in the second half that set up a Chris Boswell field goal, showcasing his speed and athleticism in the open field.

This was a major coming-out party (as if he needed one) against Denver. Through two games this season against the Broncos, Bryant hauled in 19 passes for 241 yards.

Coates — who received a hat on game day for the first since mid-November, hauled in two passes for 61 yards, doing most of his damage after the catch.

Heyward-Bey came up with a huge 58-yard catch-and-run after being left wide open down the left sideline and was a great blocker in the run game for the Steelers.

Markus Wheaton was relatively quiet as others around him went off, reigning in five passes for 30 yards on eight targets.

Jesse James led all three tight ends on the roster with one catch for 22 yards on the drive in which Toussaint fumbled the football.

Although the tight ends weren’t major factors in the passing game against Denver, they were significant factors in the running game, as well as in pass protection, standing tall against a fearsome Denver front seven.

Protect Roethlisberger long enough to do damage through the air?  Check.

The Steelers offensive line checked off both boxes for me in this game, allowing the Steelers offense to play with balance against a Denver defense that forced a lot of teams to turn one-dimensional against them.

Ramon Foster and Cody Wallace struggled at times in pass protection, as did Marcus Gilbert on the second-to-last drive of the game, but for the most part the offensive line held up long enough for Roethlisberger to get the ball out of his hand quickly, allowing the dynamic receiving corps to make plays in space.

That’s a significant improvement when the offense needed it the most.

Want to have some fun after a tough loss?

Tuitt has turned into a monster against the run this season opposite Cam Heyward, providing the Steelers with a stout defensive line for the next five-six years.

Tuitt racked up four tackles, one tackle for loss and one quarterback hit. He might have been Pittsburgh’s best player outside of Bryant, Ryan Shazier and William Gay against Denver.

Although the Broncos rushed for 109 yards on 33 carries, 34 of that came on a run by Anderson in which it appears that Steve McLendon was tackled by Matt Paradis.

McLendon recorded three tackles for Pittsburgh, while Heyward didn’t show up on the stat sheet. With that said, the Steelers front three was very good, Sunday, against Denver.

This unit absolutely dominated for about 53 minutes of gameplay.

James Harrison turned back the clock in what could be his last game in a Steelers uniform, recording seven tackles, three tackles for loss, one sack and one quarterback hit.

The 37-year-old linebacker was simply incredible. He set the edge well against the run, put heat on Manning multiple times and brought an edge to the defense that resonated across the board.

Along with Harrison, Shazier had a great game recording seven tackles while bringing the pain on a majority of his tackles. Lawrence Timmons did as well, recording six tackles for a defense that shut down the Broncos offense for the most part.

Jarvis Jones might have had the game of his life in the NFL, standing tall against the run, recording five tackles including the tackle on Anderson 34 yards down the field, showing the energy and effort that has made Jones a significant contributor defensively moving forward.

Jones also broke up one pass and played well in coverage once again.

Bud Dupree added three tackles and one tackle for loss against the run. That’s two straight games on a big stage in which Dupree stepped up and set the edge well for the Steelers defense.

The arrow is pointing up for this unit thanks to Shazier’s play down the stretch, the emergence of Dupree in the playoffs and the improvement of Jones throughout the year. The sack numbers might not be there, but they’ll come next year. I fully believe that.

This unit did a nice job in coverage, while also tackling after the catch well.

Brandon Boykin, Mike Mitchell, Will Allen and Gay broke up passes in the loss.

Personally, I thought Gay and Boykin were tremendous against Denver despite Gay dropping an interception following Toussaint’s fumble that could have significantly changed the outcome of the game.

I’m sure the dropped INT will haunt Gay, but he was outstanding all year and is a lock to be back in 2016 as he is an unrestricted free agent heading into the offseason.

The same can’t be said for Boykin despite him coming on strong as the second-best cornerback on the Steelers down the stretch.  He’ll likely receive a big pay-day in free agency.

A great day kicking by Boswell was offset by an absolutely putrid day by the rest of the special teams units.

Jordan Berry was abysmal punting the ball early on, setting up the Broncos with short fields. Along with Berry, the punt coverage unit was poor on Omar Bolden’s first return for 42 yards, setting up Brandon McManus’s first field goal to give Denver a 3-0 lead early on.

Wheaton was horrendous as a punt returner, muffing multiple punts and failing to field a few punts that the Broncos downed deep in Steelers territory.