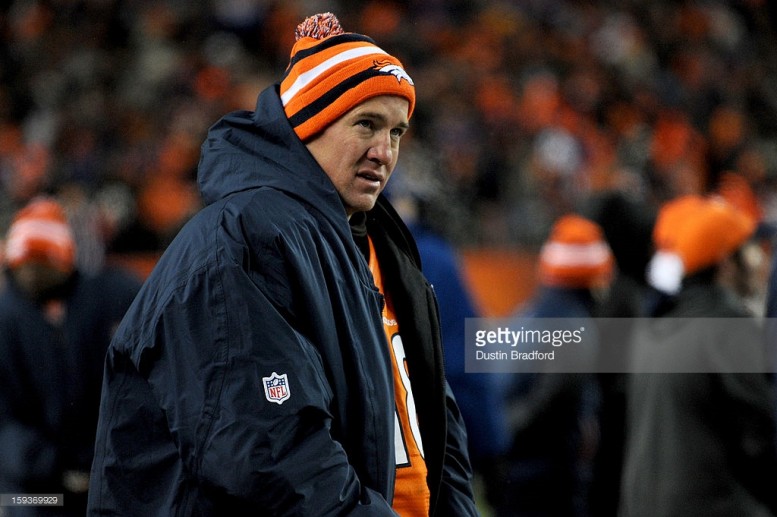 The Pittsburgh Steelers figure to be handicapped Sunday at the quarterback position against the Denver Broncos being as Ben Roethlisberger is currently battling a right shoulder injury. Even if Roethlisberger plays in the game, he might have problems throwing the football down the field. The Broncos, however, might be handicapped at the quarterback position as well as not only is Peyton Manning still not fully over the foot injury that sidelined him for several weeks this season, he’s yet to have the cold weather playoff monkey removed from his back.

You’ve probably heard the stat by now that’s been floating around, but just in case you haven’t, Manning is 0-5 in playoff games in which the kickoff temperature was 40 or below.

Now, I have researched that stat as best I can and I have found it to be quite accurate based on the kickoff temperatures listed in the official gamebooks.

In those 5 cold weather playoff losses, Manning’s teams only scored more than 14 points in a game just once and that was three years ago against the Baltimore Ravens. That playoff game, however, was also the coldest that Manning has ever played in as the kickoff temperature is listed as being 13° F. He threw 3 touchdown passes in that game, but was intercepted twice.

For his career in those five cold weather playoff losses, Manning has completed 56.5% of his passes and has thrown 5 touchdowns versus 9 interceptions. His yards per attempt in those five games is 5.33 with his quarterback rating being 61.4.

Cold weather aside, Manning has not been great this season and while his poor play could partially be related to the foot problem he’s battled this year, he’s still only managed to complete 59.8% of his passes and has just 9 touchdown passes versus 17 interceptions. 6 of his touchdowns and 5 of his interceptions came in the Broncos first four games of the season so since then he’s thrown 3 and 12 respectively.

On throws farther than 15 yards this season, Manning has completed just 35.1% of 76 total attempts for 4 touchdowns and 5 interceptions.

The current forecast for Sundays game in Denver calls for a high of 38° and a low of 25°. In other words, Manning will have a chance to finally get that playoff cold weather monkey off of his back against the Steelers. The Steelers, however, need that monkey to harass Manning on Sunday as it might be their only chance to win the game being as Roethlisberger will surely not be 100% if he even plays.