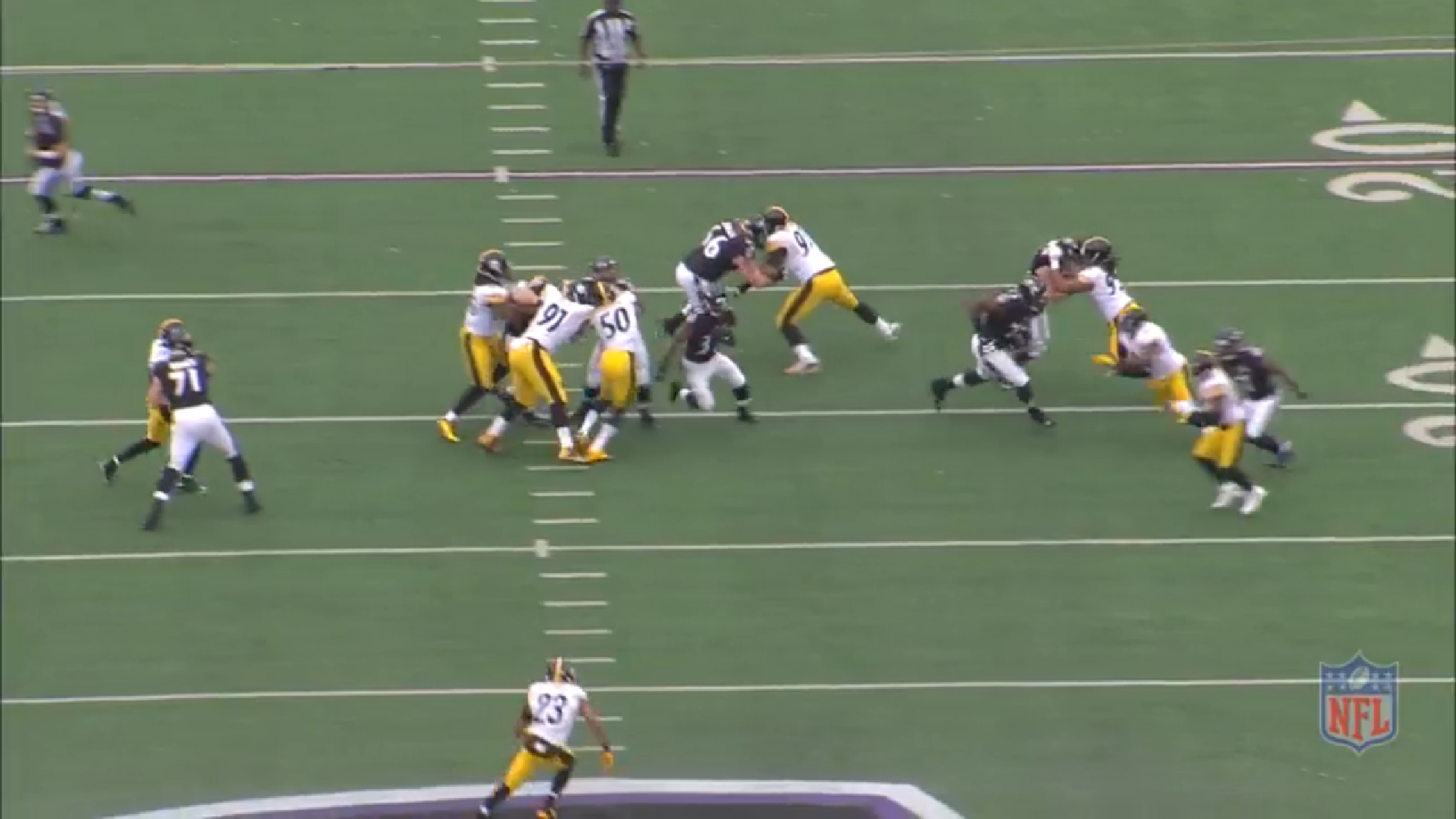 Former first-round draft pick Ryan Shazier is nearly through his second NFL season, which has once again been an injury-plagued campaign that has limited his growth. But he has managed to assume play-calling duties, which has at the same time made it more difficult for him to play with consistency.

Shazier has an excellent read-and-react instinct, with the acceleration to go along with it, but he also has a tendency to get lost when he cannot immediately read a play, which results in him overrunning plays, hitting the wrong hole, or getting stuck on blocks.

Other times, he just gets stuck on blocks period, as was the case on the second play of the game, a zone run to the left that went up the left side A gap around the center. It was the center who game up to block Shazier. The linebacker could not shed the block, and let the running back escape for nine yards.

A few plays later on the same drive, however, he did make the run stop for no gain that set up a third and long. Facing another zone run to the left, Shazier bided his time until all linemen were claimed, slipping in around the right guard and into the cutting back, who had nowhere else to go.

Still on the same drive, a third and five play just inside the red zone, the inside linebacker dropped into coverage on the tight end in the slot, giving him the outside of the field. It proved to be a simple turn and catch for seven yards that moved the chains.

Late in the first half, partially benefitting from Stephon Tuitt sending the right guard sprawling to the ground, Shazier was able to scrape off a block on a zone run to the right, cutting the running back down for a loss of a yard on first down.

He came back on the next play, however, by being engulfed by the left guard on a similar zone run, getting knocked to the ground and rolled over on. Fortunately for him, Tuitt won his battle again and made the tackle himself after a two-yard gain.

In the fourth quarter, with the Ravens facing second and goal from the three, Shazier failed to stay home on his read to prevent a cutback run, which is exactly what happened. The linebacker was then out of position to anchor for a tackle attempt on the running back, who crossed the goal line by going through him.

On the first play of the Ravens’ next drive, Shazier once again got tangled up inside, this time unable to shed the left guard, which allowed the running back to hit the hole, which he should have been in the position to defend, for a 14-yard gain.

While there were early promises this season, by the end of the year, it is abundantly clear that Shazier still has a lot of work to do in terms of consistent accuracy of play diagnosis, and especially in the ability to shed blocks to make tackles. His inability to do so led directly to at least two relatively long runs in this game alone.