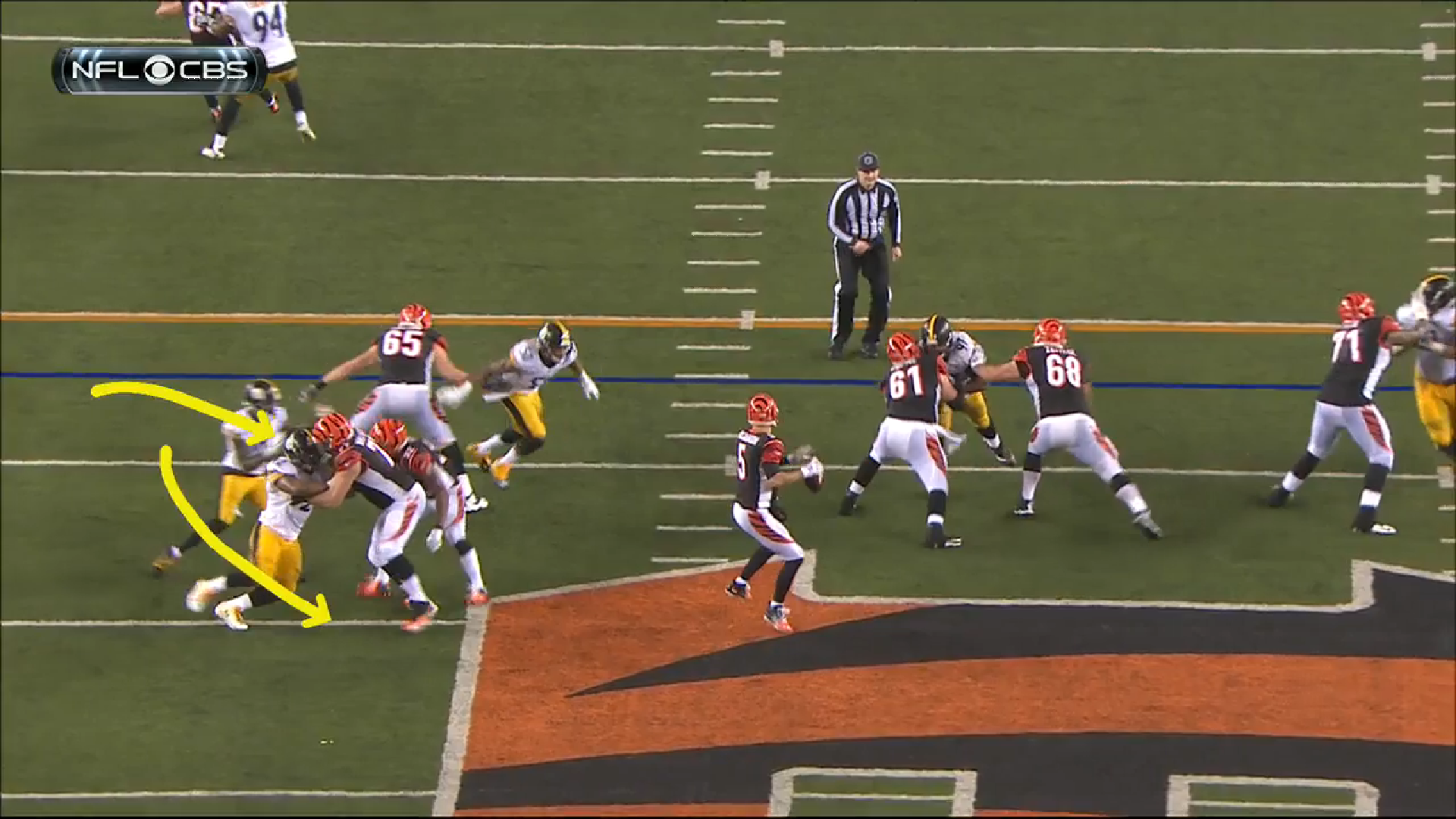 Ryan Shazier played a good game for the Pittsburgh Steelers during the Wildcard game, that much is no secret. It’s likely that the team would have lost had he not played, given his 13 tackles, two passes defensed, and two forced fumbled, with one recovery. But while it was not a perfect game, my favorite aspect of his performance was that it was a complete game, showing well in run support, in coverage, and as a rusher.

Shazier got to work early, starting with the second defensive play of the game, making a run stop on second and six. The Bengals used a lot of window dressing, showing a lot of extraneous movement after the snap on a power run left behind the pulling guard, but the inside linebacker identified and flowed to the ball carrier, bringing him down for no gain.

Shazier recorded another run stop later in the first quarter on a run off left end, this time with the Bengals pulling the right guard around the tackle. But the second-year player was able to get skinny, filling the gap and bringing the back down after just a yard.

The former first-round draft pick made back-to-back plays in coverage at the end of the first half, nearly single-handedly forcing a three-and-out for the defense. On first down, he did a nice job of tackling the catch on a short check down pass to the running back, limiting the play to a four-yard gain.

On the very next play, Shazier read the quarterback’s eyes, which were locked on to Tyler Eifert, and he was able to undercut the route, nearly coming up with an impressive interception on a high throw that would have been a difficult catch for even the intended target.

Continuing his work in coverage, he showed patience in reading the Bengals’ blocking scheme on a screen before attacking the gap between the pulling linemen, thus limiting Eifert to just a seven-yard gain thanks in part due to his sheer speed.

Cincinnati managed to convert on the next play, but a couple snaps later, Shazier was able to force the Bengals into a third and long thanks to his pressure, coming in unblocked through the right side B gap with no lineman picking him up and forcing a throwaway. He simply is too fast to leave unblocked.

His pressure late in the fourth quarter, however, was much more impressive, and also came at a more critical time, on third and two—even though the Bengals ended up converting on fourth down and taking the lead. On this play, however, he came in on a delayed blitzed and beat the center to rush up the middle and showed excellent closing speed to force another throwaway.

At the end of that drive, he also played a key role in blowing up the Bengals’ two-point attempt to keep a field goal in play for a win, and he also sagely batted down the final desperation pass straight into the ground rather than attempting to intercept it.

And you’ll notice that I didn’t even bother including his two big forced fumbles, which were crucial moments in this game. That is just a testament to how well he played.