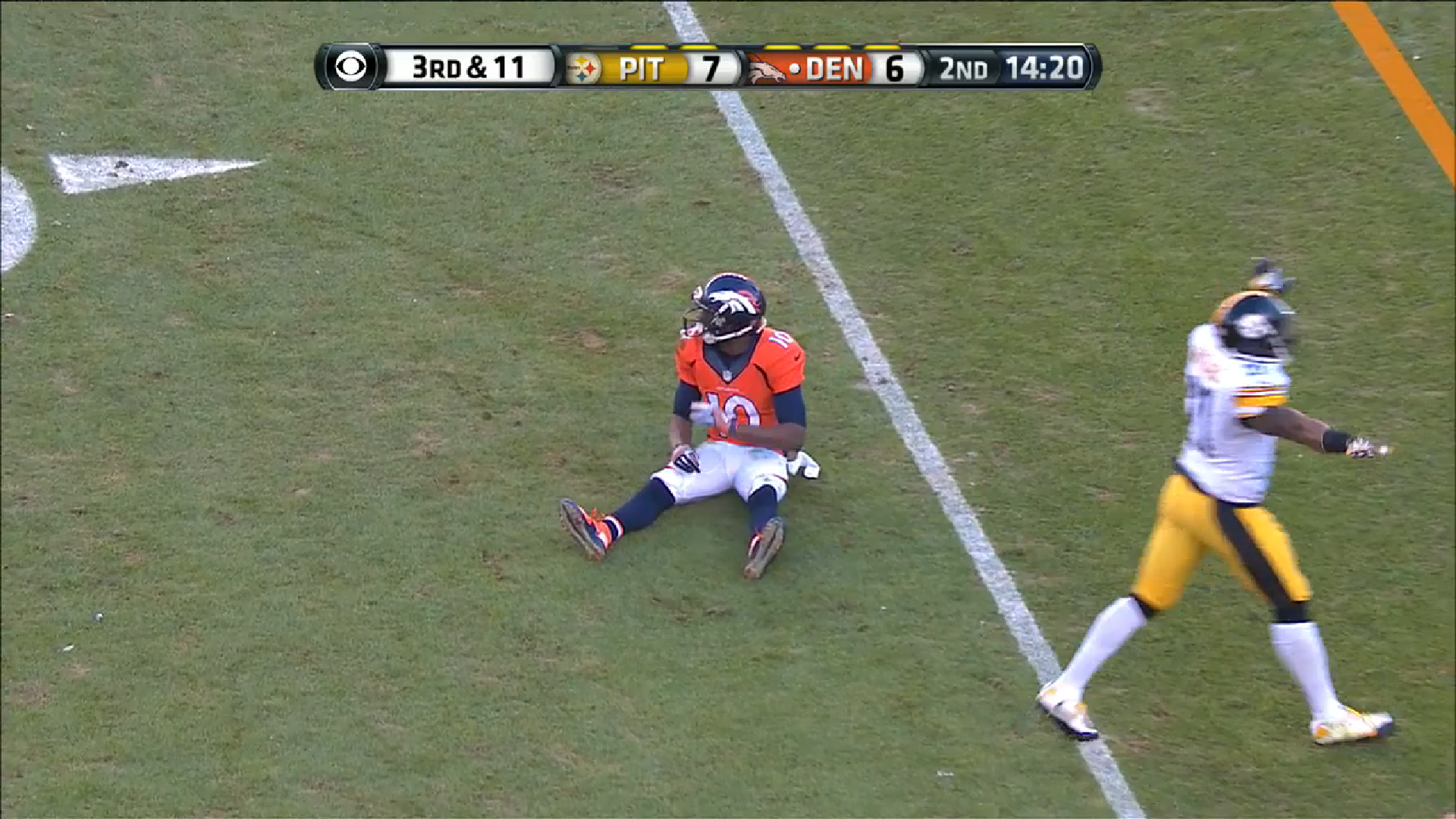 One thing that first-year defensive coordinator Keith Butler has shown in his debut in that role is a willingness to be adaptable, to experiment, to tweak. One of the late-season changes that the Pittsburgh Steelers adapted to counteract passing offense was to start using more dime defense and taking Lawrence Timmons off the field, replacing him with Robert Golden.

This was particularly the case in the Week 15 game against the Broncos, and they used the same strategy against Denver again in the playoffs, logging about a dozen snaps in the dime, but Golden also saw some nickel snaps late as well as one of two safeties.

The Steelers trotted out their dime look with relative consistency on third-down plays, particularly third downs with long distances. Perhaps Golden’s most significant play in the game came early in the second quarter on a third and 11, covering Emmanuel Sanders out of the slot on a drag route over the middle.

Sanders gained a bit of early separation with a move outside before breaking over the middle and flashing open, but the pass was a bit long and difficult to corral, resulting in an incompletion. Golden was well in position to make the tackle and force a punt regardless.

Late in the half, on a first down, he lined up near the line of scrimmage, but instead picked up the slot receiver on a vertical route up the seam, finding himself in good position deep down the field. The Steelers clearly trust Golden and his coverage abilities, having played cornerback in college, and during his rookie season.

On another third down late in the third quarter, Golden followed the tight end down the seam, but this time did not do so as cleanly as his previous effort on a vertical route. Of course, the pass never even sniffed his direction.

Late in the game, on the game-winning drive, with the Steelers facing a key third and 12, the defense put him in coverage on the tight end out of the slot, but after the receiver over the middle got open and escaped the cornerback for the completion, he became part of the last line of defense that had to chase down the runner after a 31-yard gain.

On the Broncos’ final meaningful offensive play of the game, facing a third and long, the Steelers needing a stop just to prolong the game, Golden provided an assisted tackle in a roundabout fashion after a four-yard gain to ensure they would get the ball back.

Entering his fourth season, there were a lot of unanswered questions about what Golden could bring to the defense, after establishing himself as a leader on special teams. He got a good chunk of playing time this year, including a few starts due to injury, and has put himself and the team in an interesting situation about his future this offseason.