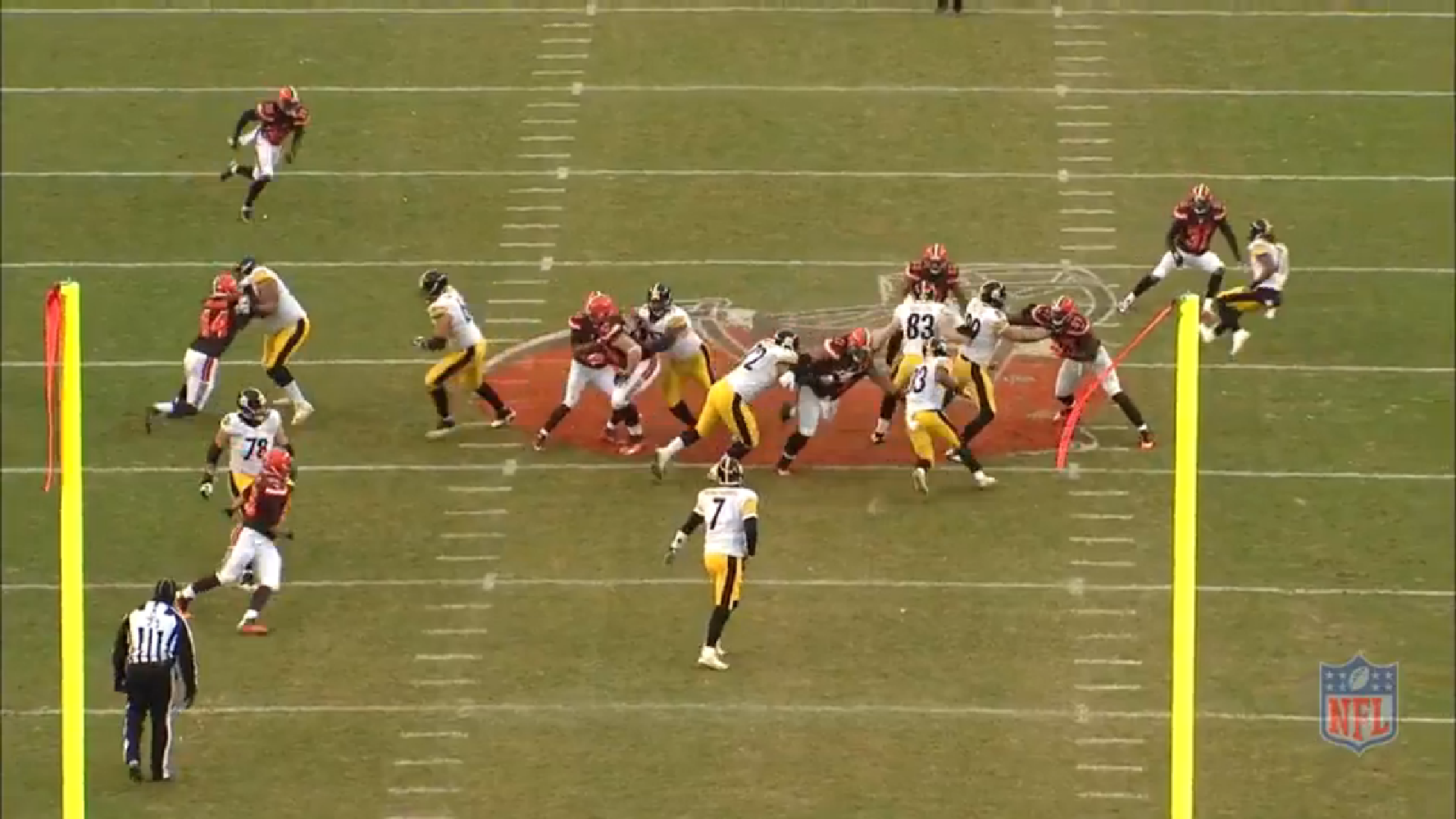 Pittsburgh Steelers right tackle Marcus Gilbert just completed the best regular season of his professional career, nearly escaping without allowing a sack on the year. Many within the organization believed he was deserving of Pro Bowl recognition, and were disappointed for him when he was not rewards with the accolade.

He finished the season strong against the Browns as well, as the entire line as a whole held Cleveland without a sack, though the Steelers are not able to run the ball. They had issues running the ball the last time against Cleveland as well, but this time they lost their starting running back.

As would be expected, his strength in the game was in pass protection, helping lead to another strong day for the Steelers offense through the air, including five explosive plays and three touchdowns. One of those explosive plays came midway through the first quarter, on which Gilbert did a nice job of reaching the edge rusher on a wide berth to chase him up the arc and around the quarterback.

Toward the end of the first, Gilbert showed active eyes and a desire to look for work after a chip block by the running back took the outside linebacker out of the play. As he saw that happened, he turned inside and helped to squeeze off the defensive tackle from breaking through the line, the result being a nine-yard pass for a first down.

A few plays later, on the play on which DeAngelo Williams was injured, Gilbert showed well getting out in space to pick up the inside linebacker down the field and putting him on the ground. Before doing so, he worked to help keep the defensive lineman out of the hole while Matt Spaeth tried to secure a reach block. The tight end failed to do so, and his man made the tackle, landing on Williams’ foot.

Early in the second half, Gilbert worked against Paul Kruger on a third and short play deep in Steelers territory, showing active feet to recover from the initial rush, allowing him to push the linebacker upfield, which provided the pocket necessary to launch a 66-yard completion.

Briefly into the fourth quarter, as the Steelers began focusing on draining the clock, looking to run the ball more, Williams’ backup carried out of a two tight end set up the middle on a run that included an excellent clear out block from Gilbert, who drove the defensive tackle across from him to the left and out of the play, opening the hole, though it quickly closed.

Of course, we saw Gilbert and the Steelers’ offensive line drop the ball and disappoint in the Wildcard round last year against a division opponent. Last year, it was the Ravens, whom Gilbert handled well this year. This time, it’s the Bengals, against whom he allowed his only sack of the season.