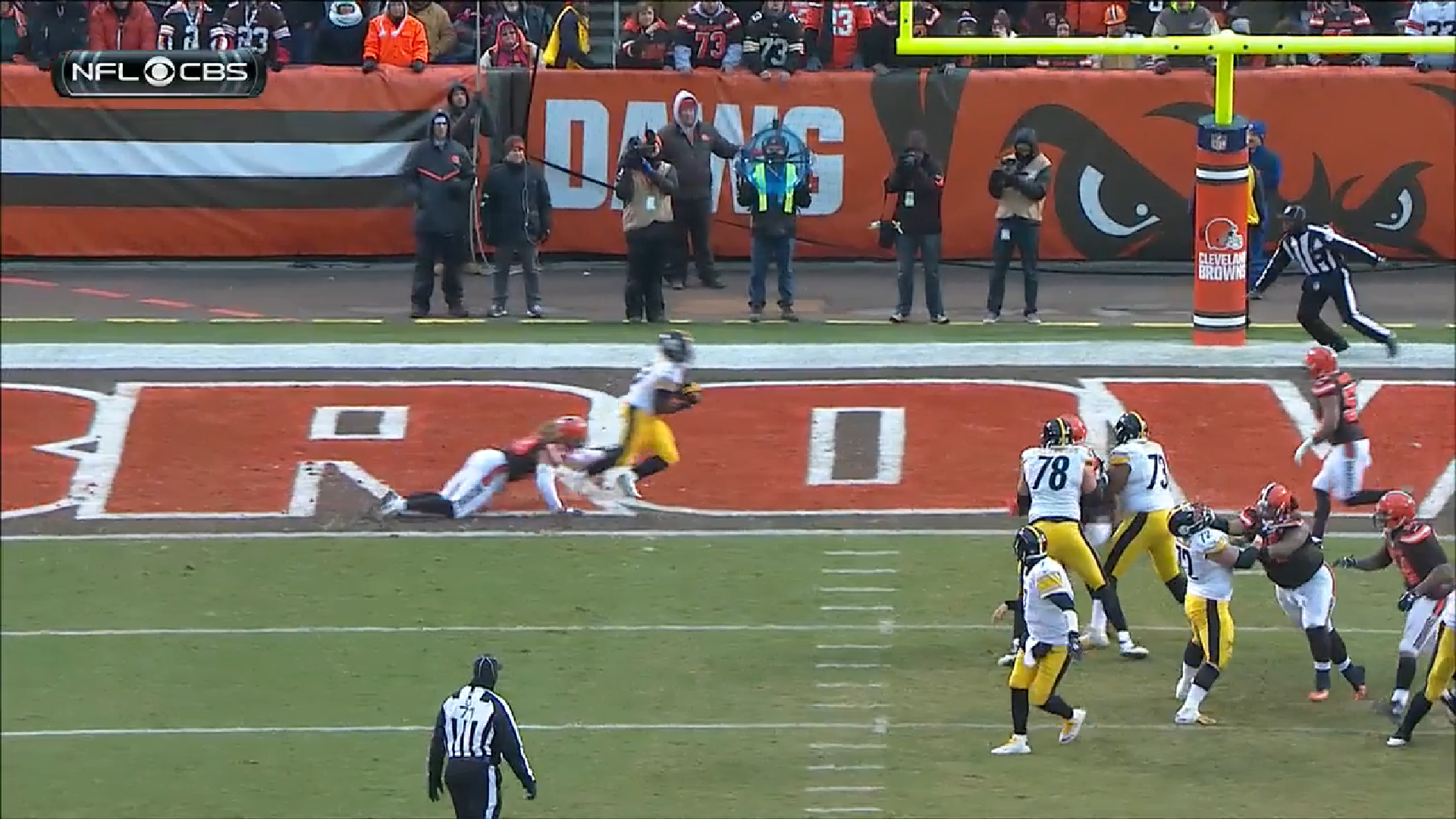 Now that we know Fitzgerald Toussaint is indeed going to get the call today, then he is most likely going to have to show that he can do a little more than pass protect for the Pittsburgh Steelers—he will also have to carry the ball. And he did so 12 times in the season finale following DeAngelo Williams’ injury, but for just 24 yards, not impressive numbers by any stretch.

As we all know, however, statistics are meaningless without context, so with that in mind, it is important to take a look at some of Toussaint’s carries to find what type of story they really tell about his ability to run the ball.

His first carry of the game came on his second snap, though separated by about four minutes-worth of game time. It was a first-down play, on which he gained just two yards. But, just for starters, it some from a three-tight end look against a nine-man box from the Steelers’ own seven-yard line.

With all three tight ends lined up to the right, Toussaint cut left toward what looked like a sliver of daylight that quickly closed. With Nate Orchard setting the edge on the left side, the back simply cut up field to take what he could get, a wise decision given the down, distance, and position on the field.

On second and eight, the following play, he was able to pick up five yards to tie for his longest run of the day, showing toughness between the tackles, stepping through one ankle tackle attempt at the line of scrimmage before bouncing off a blocker, and then a defender, spinning and shouldering his way forward before he was gang tackled by a series of defenders. The only problem is that he possibly turned up a bit of daylight around the left edge, but in fairness, it initially looked like Orchard may slip off his block again.

Early in the second half, from a two-tight end set, the Steelers ran a zone run to the right on which the inside linebacker Craig Robertson was able to dash to the hole with the line not accounting for him in their blocking assignments. Toussaint was able to dash past him to the perimeter for a two-yard gain to make something out of nothing instead.

Later, in the fourth quarter, on another first-down run out of the 12 personnel, he managed to spin out of a tackle attempt at the line of scrimmage, picking up the pull block of his tight end to rush up the middle for four yards. The center getting beat at the line of scrimmage delayed the development of the play, which allowed Karlos Dansby to scrape across to the back to make the tackle where otherwise there may have been a crease.

After the Steelers recovered a fumble deep in Browns territory and quickly scored, they went for the two-point conversion, running spread personnel in spite of a 12 look with Heath Miller lined up as a wide receiver. Out of the left sidecar from the shotgun, Toussaint committed to a chip block on Paul Kruger before cutting to the inside of the field to receive Ben Roethlisberger’s pass for the conversion. The reception does not officially count as one statistically, but he is credited for having scored two points, the first of his career, on a nifty little play.

Later in the game, as the Steelers tried to drain the clock up 28-12, Toussaint got three straight carries, starting with a five-yard gain with three tight ends on the field. On a zone run right, he did, in my estimation, a fine job of identifying a hole and getting skinny to pick up positive yardage.

On the following two plays, he would pick up two after escaping another tackler who shed the center, and then lose three after Miller got tangled with the pulling guard on a power counter run, resulting in his inability to reach the perimeter defender.

In all, Toussaint, to me, was able to make the most out of poor blocking against a defense that was committed to stop the run. Williams, after all, gained just eight yards on five carries before he exited the game, six of which came on the play on which he suffered his injury. If the Steelers simply block adequately, there is no reason that Toussaint should not be able to be successful.