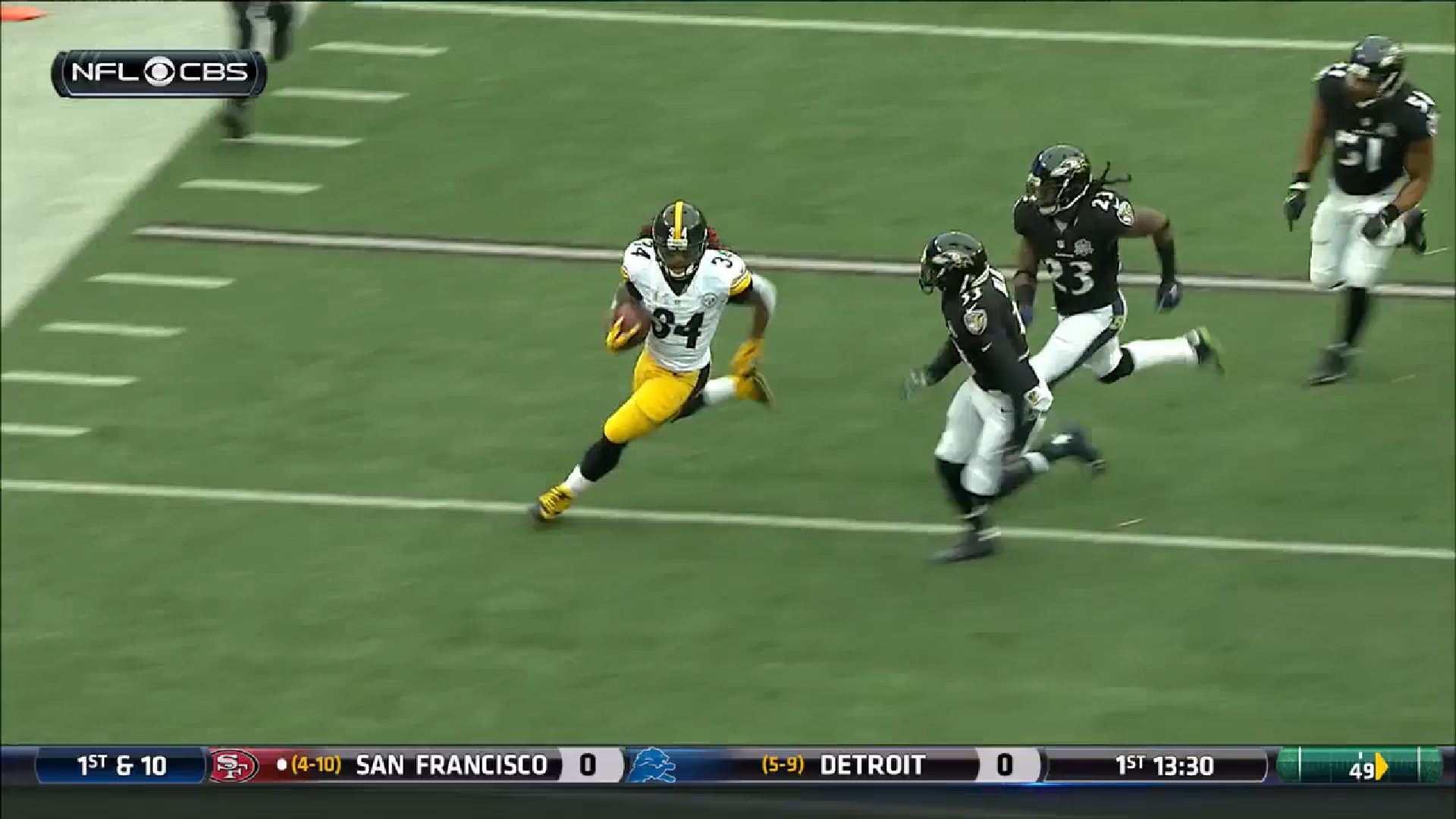 In the first nine years of DeAngelo Williams’ career, he had never had a game in which he rushed for at least 100 yards and caught at least another 50 yards through the air. Since joining the Pittsburgh Steelers, he has done so twice, most recently on Sunday as he continues to be one of the few consistently bright lights of this team.

He started off the game with three straight carries, and was only spelled briefly after breaking off a 30-yard run. On the third play of the game, Williams followed his fullback before witnessing an open hole around right guard, punching through the gap, slipping past one defender, and taking off up the sideline.

Late in the first quarter, he took a pitch from left of center, scoping out his path before taking off on an 11-yard run to the left. With the left guard able to seal the nose tackle inside, he took the outside route, cutting back inside as the right guard cleared the path downfield. He was perhaps one more block away from breaking off a big gain here.

As we have seen time and time again, of course, Williams is not just a runner, nor is he just a pass catcher—something he has done more this year than he ever has. He has also consistently been a positive contributor in pass protection. Early in the third quarter, he did an excellent job of chipping the right outside linebacker scraping inside on a blitz to allow for a deep vertical throw, which happened to draw a penalty.

He added another explosive play midway through the fourth quarter, this time through the air with a 22-yard reception. On a first and 10 across midfield, aligned left of the quarterback, he ran up through the middle before breaking sharply to his left, catching the linebacker in coverage flatfooted.

As a result, Williams was able to create instant separation with the linebacker trailing, as he was not expecting such a sharp cut in one direction out of the hole. The back took the ball on a short pass in the clear and rushed up the field nearly unchecked for about 20 yards.

A few plays later, he capped off the second drive of the day with a rushing touchdown, which was his 11th for the season—the first time a Steelers running back has had at least 10 in a season since 2010. In 23 personnel with a tight end and fullback to the open right side, Williams used his edge blockers to get to the sideline and into the end zone for the score.

When it comes to the offensive side of the ball, outside of Antonio Brown, Williams was the only consistently strong contributor on the day, gaining 153 total yards on 23 touches and scoring both of the Steelers’ touchdowns. It would be unfortunate if his excellent regular season is not rewarded with a trip to the playoffs.