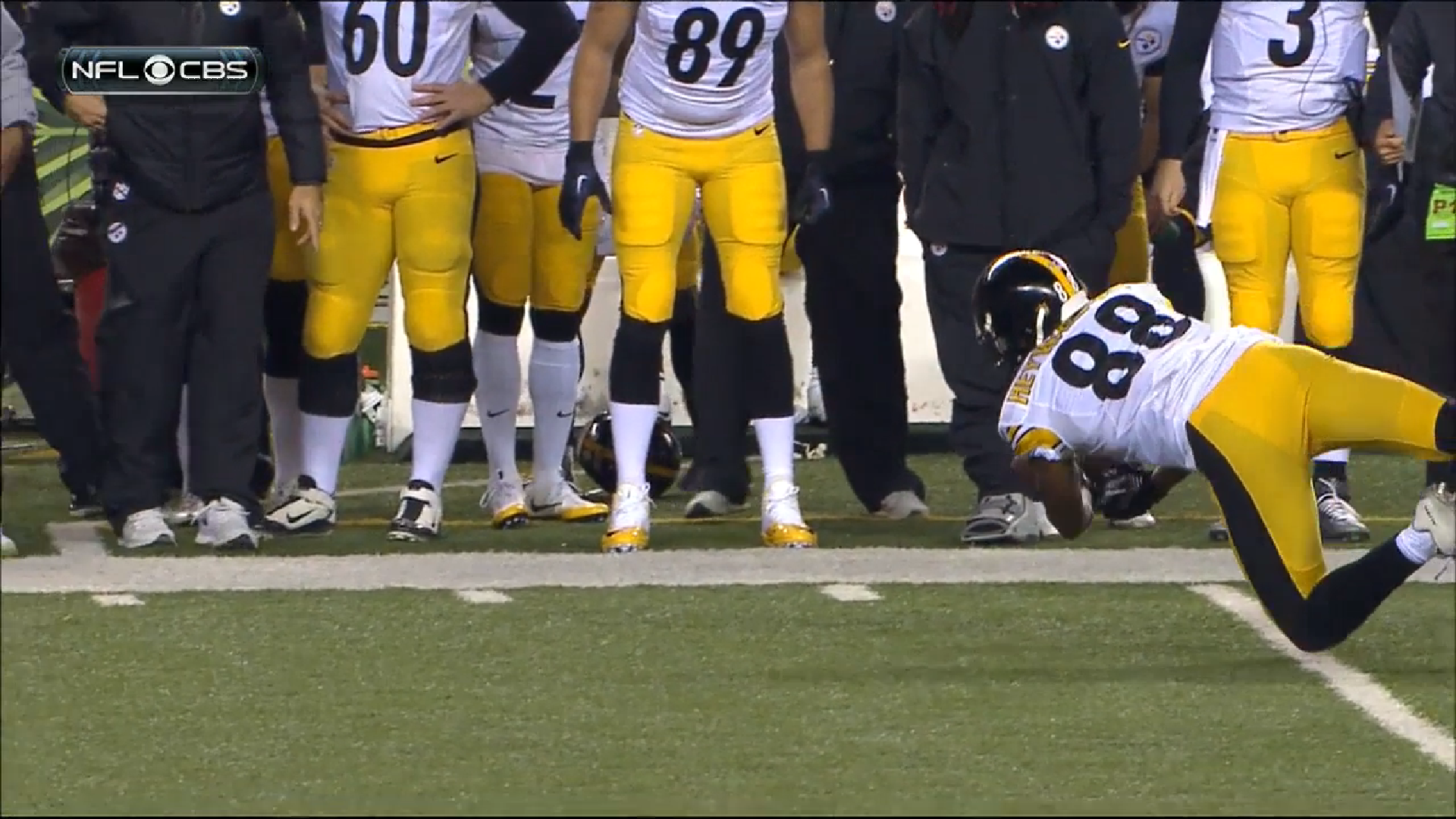 While he may have lost some playing time to the resurging Martavis Bryant, Pittsburgh Steelers wide receiver Darrius Heyward-Bey still got his playing time on offense in the Wildcard game last week, logging a couple dozen snaps, close to a third of the team’s total offensive plays.

He did not record any statistics in the game, though he was targeted twice, both resulting in incompletions, though we will get to that later. As everybody knows by now, on a healthy Steelers roster, when Heyward-Bey is on the field, it’s not as a top target.

There are many other valuable roles that he fulfills, including as a deep threat that typically serves as a decoy. But with his 66-yard catch in just the season finale on tape, defenses have to respect that. And they also have to respect his ability to throw a block.

It has become increasingly predictable that a formation consisting of Heyward-Bey and Bryant on the same side of the field—particularly with the latter on the edge, often on the boundary—is a sign of a screen pass. And that is how the Steelers opened the game, with a screen pass to Bryant, and Heyward-Bey out to block.

Not that it always works perfectly, and it didn’t, exactly, on the opening play. Heyward-Bey could not get all the way out to reach the boundary side of Leon Hall to try to win the sideline for Bryant, but he at least made it interesting—and he did a better job later in the game (hint: foreshadowing).

The Steelers went three-and-out on their opening drive, with the third play being a targeted pass to Heyward-Bey that fell incomplete. To be clear, this is not a drop, even if it may appear that way from the replay. It would have been a stellar catch, but Ben Roethlisberger was off-target on the throw after a pump fake and simply tried to lead his receiver too far to give him a fair shot at the ball.

Late in the half, with the Steelers trying to drive, Roethlisberger hit Antonio Brown on a drag route over the middle on second down to move the sticks, with Brown trying to fight to get out of bounds despite the fact that he caught the pass at midfield. Heyward-Bey saw this and wisely blocked the cornerback to give Brown the chance to get out of bounds. It’s not a play many would think about, but these little things are valuable.

Heyward-Bey’s second target came on the Steelers’ opening possession of the second half, and it also ended the drive, but it is, again, a play that you can’t pin on him. Roethlisberger forced the ball to the back of the end zone, and the cornerback played him very well to cut off his route—perhaps too much.

In the fourth quarter, the Steelers were set back after taking a sack to set up third and 17, so they played it conservative with another screen to Bryant. Heyward-Bey did a much better job of blocking on this one, but of course it was not surprise that the play came up short of converting.

His playing time has varied quite a bit this year, but Heyward-Bey’s contributions to the offense have been valuable, if underappreciated, and he remains a key special teams player, serving as a gunner for most of the game among other things and helping to induce a couple of fair catches.