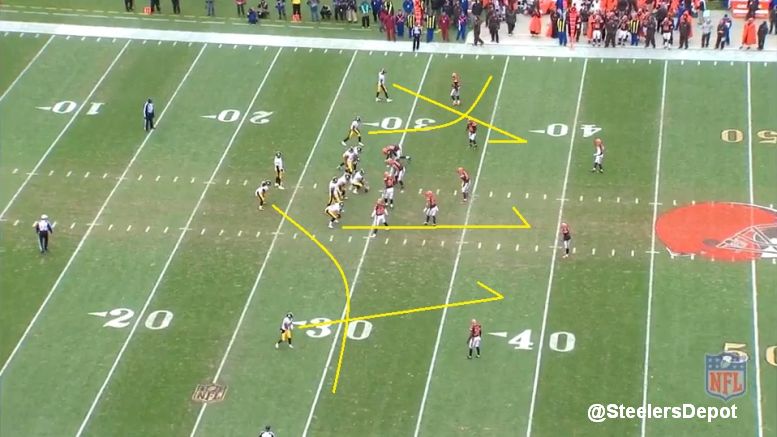 The hot news story from yesterday stemmed from Ben Roethlisberger’s comments on Martavis Bryant. In that, he gave some blame to Bryant on his first interception.

“He didn’t push his depth and when he got in there, he saw the safety, and he kinda peeked at him. Instead of coming right back to me, and in a worst case scenario the ball gets batted down because they’re contested, he tried to go around the guy.”

I’m not going to pretend that I know more than the quarterback of this offense. I am a lowly blahger writing this from afar. And though I didn’t have an overall issue with his comments – we can’t ask for players to be honest in interviews and then blast them for it – his blame of Bryant seemed a little unfair.

There was a larger issue. One that started with Todd Haley. The Steelers’ playcalling up until that point lent itself to creating that negative play.

To illustrate this point – and I don’t get on a coordinator’s case unless there is a compelling reason – let’s look at every pass concept the Steelers ran leading to that play. The first play of the game was a drag/screen pairing with an out route built in. There were two other screens run, an incompletion to Antonio Brown and no gainer to Bryant, which I wanted to point out, but didn’t grab screenshots of.

Here’s a Hank concept (curl/flat) completed in the right flat. 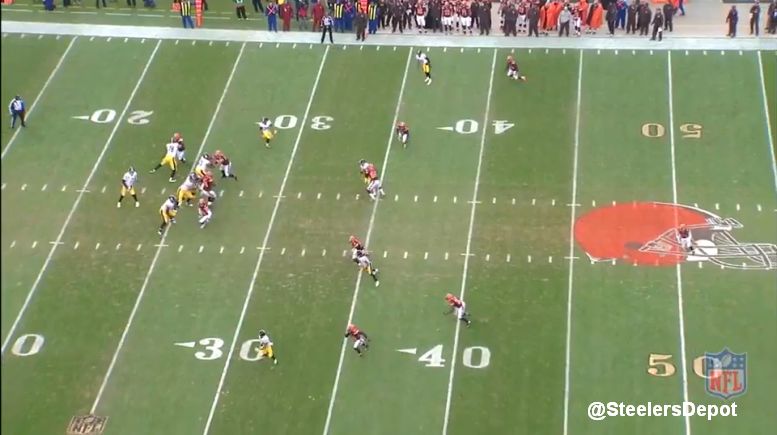 And here is another on the opening drive. 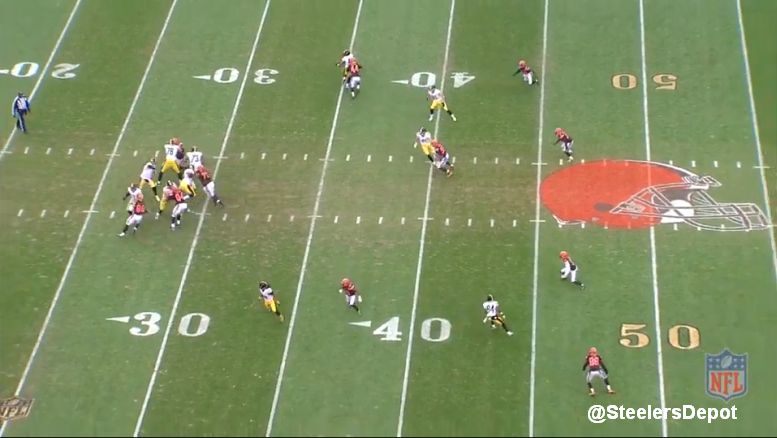 The opening pass on the next drive does have two vertical routes to the bottom but ultimately, the ball is thrown on a curl to the boundary. 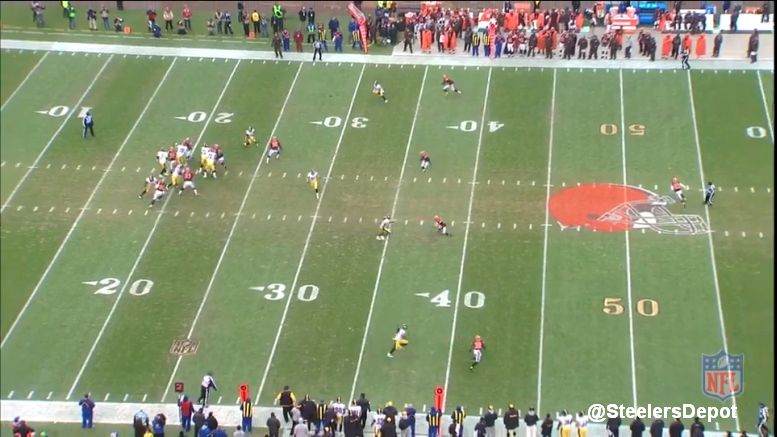 The next is the first to have some vertical concepts. The pass is eventually checked down to DeAngelo Williams underneath. 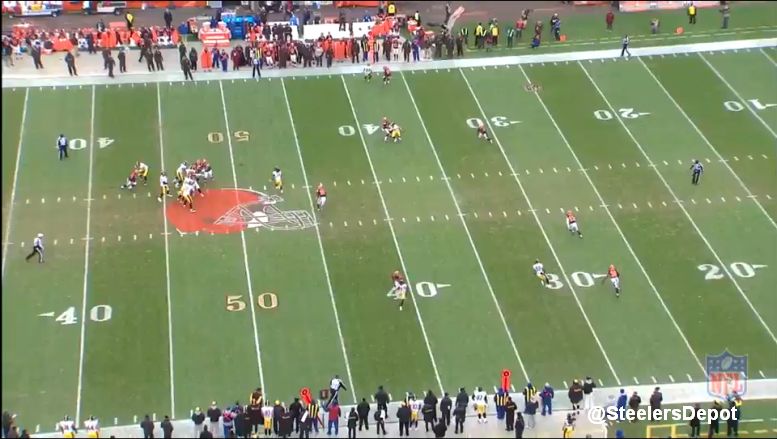 Followed up by a Harry Concept. Similar to Hank, curl/flat, but without a player running a curl in the middle of the field. 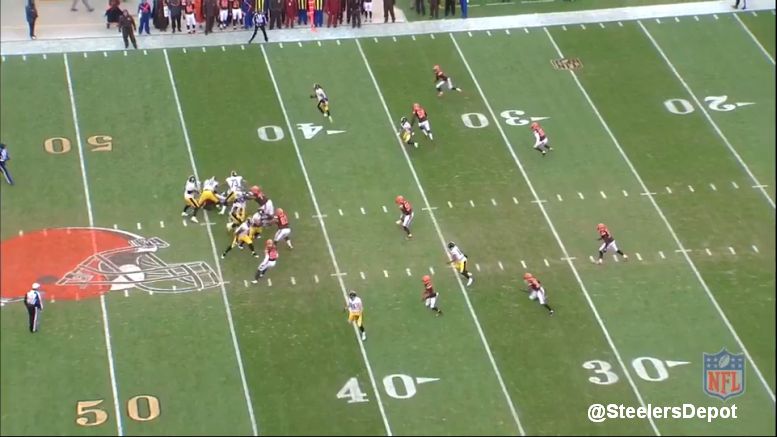 A slightly more vertical concept, throwing the skinny post to AB, though it’s worth noting this came against the Browns’ single high shell. 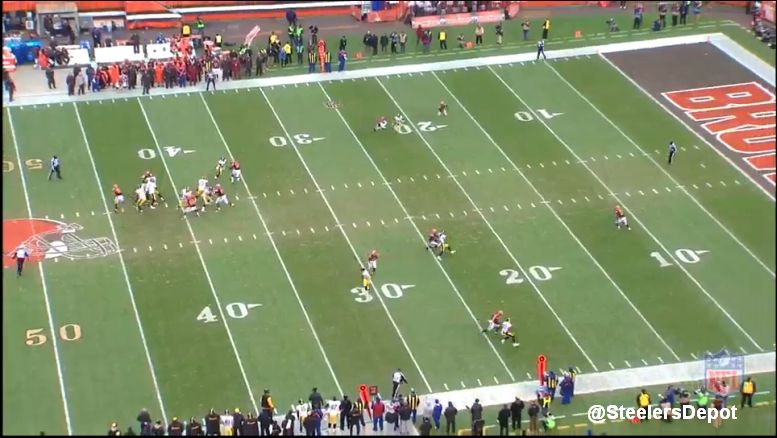 And now to the interception. Another Hank Concept. The Browns are in a two high shell, banking on forcing the Steelers to throw it underneath. Safety Jordan Poyer recognizes the concept, the curl/flat, and jumps the route. 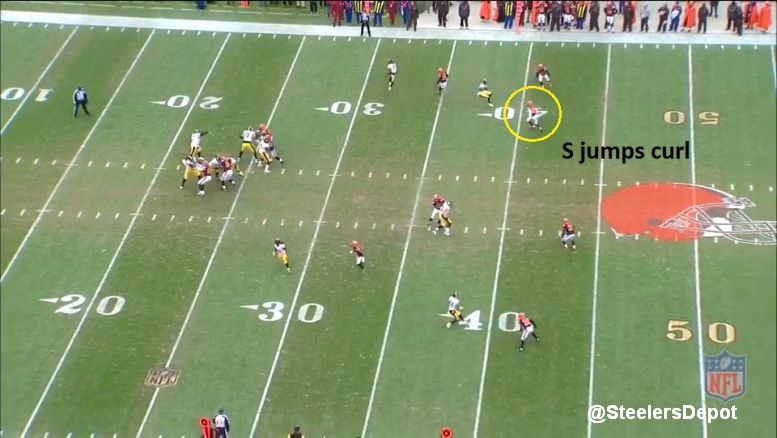 Makes a great play on the ball and honestly, I don’t know what more Bryant can do here. Poyer had a good sense of what was coming based on previous plays and the initial route concept and capitalized on it.

Without a couple of vertical shots and concepts mixed in, defenses are going to begin to cheat up and jump those short and intermediate routes. Seeing it just once is enough to get the secondary to think twice, back off, and respect that deep ball. Sure, Bryant could’ve “sold deep” better like Roethlisberger suggested when he said to “push for depth,” but actually having one of those routes called would have an even greater impact. Just not one of Haley’s better sequences.