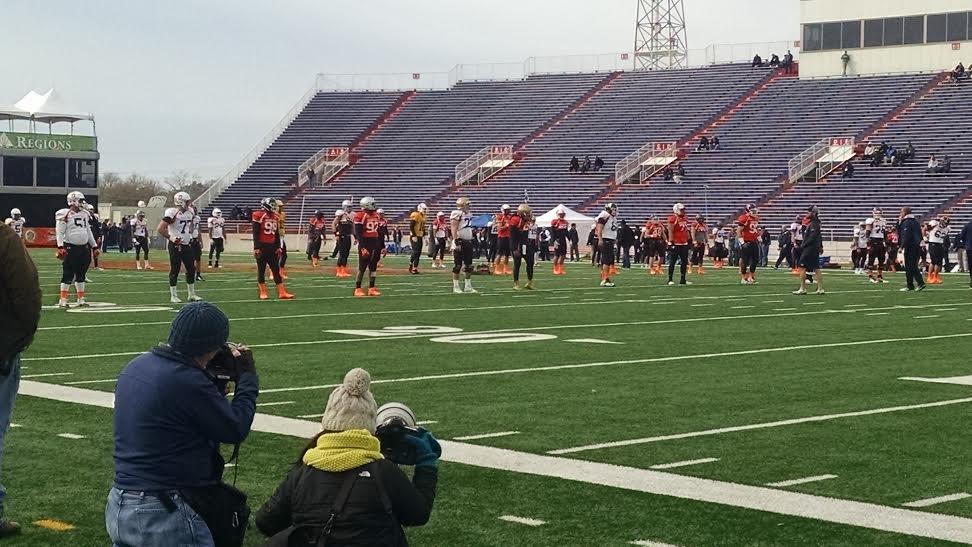 Our last day of practice here at Mobile (*sad face*). But the weather was warmer, especially for the afternoon practice. Another great day and as I write this, still one more press conference to go. Heading back to the Burgh tomorrow, landing in the afternoon.

As always, your winners/losers from each side.

1. Braxton Miller didn’t finish today because of a right leg injury,t he severity I do not know, but I did like to see him learn from mistakes and take to coaching. Asked to use his speed and be more aggressive and the second time around, he improved. Also able to separate from Eric Murray on a dig and make the catch despite Murray – in his natural, aggressive state – somehow ripped Miller’s helmet off.

2. Tight end Henry Kreiger-Coble flashed in one-on-ones. Y shake to beat Darian Thompson and finished with with am excellent one-handed grab. Had another diving grab going to the ground versus K.J. Dillon in a later rep.

3. Haven’t said a word about him so far but coaches were happy with Kenneth Dixon’s play today. Hit the hole with conviction. One Dallas Cowboys’ coach yelled out, “That’s the right stuff, La Tech!”

4. Lawrence Thomas sure doesn’t show it on tape but he was a better-than-expected pass rusher today. Beat Willie Beavers on the edge once and with a spin on another rep in OL/DL. If he could ever do that in a real-game, you might have one heck of a prospect.

5. Had a nice conversation with some friends today about Eric Murray. Made the good point that you’d rather have a player be too aggressive than passive, and Murray definitely falls into the former. He ended the practice with a breakup on a fade to Aaron Burbridge in the right corner. Just don’t know if he’s anything more than a Cover 2 corner and that is really going to limit him.

6. Harvard right tackle Cole Toner certainly looks the part. Not lost like you might think from a small school guy. Plays with a sound base, knee bend, good enough feet, and plays hard in each rep. Heard one scout singing his praises last night. We’ll get into final thoughts early next week, but overall, a nice body of work. Hope he can carry that into Saturday’s game.

7. Tyler Ervin is a little guy but he is fearless in pass pro. Coaches matched him and Utah’s Jared Norris up in backs on backs and Ervin hung tough, winning the first before anticipating a bull and getting swimmed over on the second. In team drills, Ervin even squared up to Carl Nassib, who towered over him, but still a good effort.

And those who struggled today.

1. Unfortunately, I think “struggled” is too nice of a word for Iowa center Austin Blythe’s performance. Short arms and he can’t get into the defender’s pads in pass protection, getting pushed around time and time again with Matt Ioannidis doing a lot of the damage. Had a high snap over Cody Kessler’s head, too. Have not seen his game tape so I don’t want to be too quick to judgment but based off this week, not even a draftable prospect.

2. Ohio State’s Adolphus Washington can be a talented player but he needs to be nastier. Too finesse of a rusher, always trying to work around lineman, never through. Finally, he finished with a bull rush on Stanford’s Josh Garnett. But gotta see it more.

3. I don’t study the quarterbacks a ton but Kessler got locked onto Nick Vannett in the end zone, never seeing Tyvis Powell underneath. The safety picked it off. As a whole, the quarterbacks haven’t looked impressive this week, though it’s a difficult spot to thrive in.

– Jason Garrett was counting off the offensive and defensive wins in WR/DB. Defensive backs led, pretty big, most of the time, and Garrett just keep using the word “bludgeoning.”

– For whatever it’s worth, the Cowboys end practice by getting back into the stretch line for their cooldown. The Jacksonville Jaguars’ staff do not. Just two different approaches.

– Heard Mike Tomlin was silently nodding as Carl Nassib went through drills in individual work. Would be odd fit for Pittsburgh. Not ideal as a five tech or OLB. But file that away.

– Some good ‘ol barbecue for lunch. Pork sandwich with onion rings and mac ‘n cheese. Throw in the warm weather and it’ll be tough to go back home. Thanks all week for Touringplans.com for paying for my meals.

1. Continue to be impressed by Harlan Miller, the corner from Southeast Louisiana. He’s becoming a little more patient, reading the hips of the receiver, and is quick to get on top of routes. Physical player. Sterling Shepard tried to run a pivot route but Miller was right there to break it up.

2. Several cornerbacks had impressive days. Jalen Mills is at his best when he can work downhill. The three step game. Slants and short digs. Does have a bigger issue when he has to flip his hips and turn, loses some ground, but he closes in a hurry. Had at least one breakup and I think one interception in team drills.

Samford’s James Bradberry also did well, using his length to play the pocket. Knocked one away from Paul McRoberts. Jonathan Jones does a solid job of finding the football in the air. Gus Bradley and Sterling Shepard spoke high of him in their press conference just moments ago. Guy on the rise.

3. I didn’t expend a lot of energy on the off ball linebackers but Jake Ganus looked explosive changing directions and fluid dropping. I’m excited to put on tape of him at some point.

4. Deion Jones is just an incredible athlete who, in the right system, can thrive. Has the feet and burst of a corner or safety.

5. Shawn Oakman had another decent practice today. Got Cody Whitehair, one of the top guards here, on a swim in one-on-one. He came to play this week and I think to a certain extent, proved some people wrong. Or at least will make them check the tape. Playing more physical with better hand use than expected.

6. The tight end group down here has been pretty darn “meh” but Jerell Adams rose above that today. Able to set his hips and hinge the outside defender on an outside zone. Made some difficult catches, getting his hands away from his body, in one-on-ones. Shook DeAndre Houston-Carson on a little pivot route in one-on-one.

7. Couple instances of guys getting physical. Jay Lee and Le’Raven Clark had some sick crackbacks today. Especially love to see it from Lee, wide receivers playing with an edge.

8. A lineman I had spent little time observing who popped to me today. Misouri’s Evan Boehm does a nice job of keeping his base and playing low with a strong anchor. Not to the extent of Jack Allen but relatively close.

And those that struggled.

1. Just don’t see Baylor’s Spencer Drango staying at left tackle. There were a couple of glimmers of positivity, after getting coached up several times, but he just struggles getting enough depth and firing off the ball to seal edge defenders. Jordan Jenkins slipped past with easy once. Drops his eyes on contact. At best, put him inside and hope he can win with the power he has.

2. Sebastian Tretola is trying out there but the lack of length I think is causing him to lunge on his set, trying to shoot his T-Rex arms. Causing some problems. Coaches also reminding him to get his eyes up.

3. Dadi Nicolas is an athlete but coaches have been holding his hand all week. Telling him where to line up, be it in individual or team drill. Coaches having to correct him to get on the ball today. Hard to imagine he’ll pick up a full NFL playbook easily.

4. Vadal Alexander saw more time at guard today, an indication the Jags don’t know if he can play tackle. Just watching him in the stretch line, you can see he isn’t that flexible. Or not trying. I don’t know which is worse.

5. Linebacker Josh Forrset is really stiff. Can’t get his hips lowered. Would look like a guy who is limited to two downs but again, with all the 11 personnel, it’s really more cliche than substance anymore. Times they are certainly changing.

– Weirdest thing I saw today? A scout clipping his fingernails during practice. Ew.

– The Jaguars’ finished practice about a half hour early. Ended on a two minute drill. But it was the strangest thing. Jacoby Brissett spike the ball at the defense’s 20 and then practice was over. Why didn’t they finish the drill? There was time left.

– Gus Bradley is a ton of fun in his press conferences. Says he has a spirited group. Likes to keep practice fun because there is already so much pressure on these guys. “Why pile on?”

– Can’t get over how awesome this environment is. Pure football, all the time. I’m going to miss it. Already can’t wait for next year.