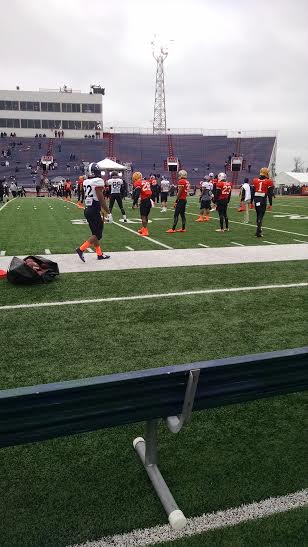 Welcome back everyone. Today in Mobile felt a lot like a day in Pittsburgh. Mid-40s and with the wind, made it a very chilly practice. I admit I didn’t dress for warm weather and froze my McChickens out there for the five hours total we were outside. Not the most pleasant experience but hey, I got to watch football. No complaints. Warmer weather tomorrow they’re calling for, our last day of practice at the Senior Bowl.

Little less to talk about today because we’ve cut out the weigh-ins. But still so much going on so let’s dive in.

– Little bit of house-keeping, for both sides. TE Jake McGee is out with a hamstring injury, though he’s still in Mobile and meeting with teams. Guard Connor McGovern has left with a hamstring while Ohio State OLB Josh Perry is done with a grown. TE Darian Griswold, out of Arkansas State, has been added. He flew in today and was around to practice with the South squad.

– The Dallas Cowboys’ coaches were getting on the receivers early and often. Wanted to see them be more explosive coming downhill at the top of their routes, running comebacks on air. Anything late and the ball will be too far in front, incomplete. Jordan Payton and Leonte Carroo were two having that issue. Carroo apparently didn’t finish the day with some sort of injury. Bummer.

– Cornerbacks were working on their press at the line. Eric Murray was praised for the power on his punch but coach, believe it was Joe Baker told him to get his hands lower. Coach was really happy with Tavon Young, too.

– Couple of highlights from LB/S and RB/TE one-on-one.

1. Kenneth Dixon beats Kyler Fackrell easily inside but the ball is out as soon as he breaks, sailing over his head.

4. Blake Martinez opens his hips too early and Dixon wins easily on a short in cut.

5. Bryce Williams tried to run a post-corner but can’t change directions quickly and K.J. Dillon nearly picks it off, seeing the route the entire way.

6. Ervin looking like a natural receiver, finding and adjusting to a throw deep down the left sideline, contorting his upper half around to make the catch as he goes to the ground. One of the nicer players of the entire day. Came against Tyler Matakevich.

7. Soma Vainuku gets just one rep, running a quick out, and lets the throw into his chest, clanging off it and incomplete for a drop.

8. Tyvis Powell has seen Vannett in practice enough to know what’s coming. Plays it well though and the pass incomplete, Powell competing for it at the catch point. Some coach calls out, “I see you Powell!”

Let’s get into some players who did well.

1. Braxton Miller needs work but I like what he’s done. Jason Garrett praised him, one of the few players asked about that he gave more than a short, PC answer about, saying his progression in the last 48 hours has been “significant.” He is still a fairly raw dude but he was doing better in some aspects, like bursting out of the top of his route, better than receivers who had been playing the position their entire life. Natural separator underneath and vertically. Gave Kevin Peterson fits today. Had a nice head fake outside and stemmed his route inside to beat him on a dig.

2. Again, thought Tyler Ervin looked natural as a receiver. Judging him as a runner is tough when there isn’t full contact, just thud tackling, but you can see that burst and willingness to cut into the heart of a defense. Feels like a New England Patriots’ kind of guy and sure enough, they were meeting with him in the Riverview Plaza Hotel.

3. I didn’t get a great look at him but Western Michigan’s Willie Beavers is back at left tackle, where he played the last two years and is more comfortable with. Surely played better today.

4. Carl Nassib continues to keep doing well in drills. That first step with bend has been talked about but also is able to convert speed to power and push the pocket. Walked Beavers back today.

5. Adolphus Washington was one of the higher rated players here and is showing why. Keeps blowing up run after run. After one stuff at the line today, a Cowboys’ coach hollered out, “Ohio State, I like that!”

6. Jack Allen is just a guy who is difficult to move. Low center of gravity, plays with correct technique on every snap. Not going to walk him back. He continues to show well here in Mobile.

7.  Chris Moore had an excellent day. Relatively unheralded receiver out of Cincinnati. Crisp routes, sinks his hips and gets out of his cuts quickly, and doesn’t drift on his routes. Works hard to extend and catch the ball away from his body.

8. Jason Spriggs is another North lineman who showed up. High hands and shoots his arms, creating an effective punch. He was able to mirror against Jihad Ward and helped put him in the ground on another rep when Ward tried to dip the edge.

And those who struggled.

1. I like Kevin Peterson but today was an inconsistent day. At best. He did nearly come away with a pick undercutting an Aaron Burbridge comeback but Miller gave him fits and he looks uncomfortable in bail technique, slow in transitioning and driving downhill. Hopefully tomorrow is better.

2. Tight end Bryce Williams is a big body and wore a lot of hats at ECU but is incredibly stiff and is going to have trouble creating any separation. As I wrote above, tried to run a post corner in one-on-ones today and KJ Dillon ran the route for him. Williams has to be a little more detailed-oriented, putting the ball away immediately after making the catch. Once put it to his hip in a drill on air. Jason Garrett noticed and called him out on it.

3. Stanford tackle Kyle Murphy continues to struggle with speed rushes off the edge. Have to think he’ll have to kick inside at the next level and by no means is that an automatic, successful switch. And I’ve talked about it with several draft guys down here. There is no such thing as right tackle being the “easier” one in pass protection anymore. Too many teams have great rushes as LDE/LOLB or are flipping their guys to each side. Can’t hide anyone. If you’re not competent laterally, you’re getting exposed.

4. Braxton Miller gave some praise to Eric Murray, calling him aggressive, but I think it’s to a fault. Guy is very grabby and could be a penalty nightmare at the NFL level. He hasn’t done a lot to impress me so far and the tape I watched was equally lukewarm. Only a boundary corner in the games I viewed and I wonder why that is.

Again, we’ll go through the highlights/lowlights.

1. Said it yesterday, I’ll say it again. Dan Vitale can be a third down back in the NFL. Solid pass protector. Has a good base, strength to absorb the rush on contact, and doesn’t overcommitt – patient, like I said yesterday. Understands technique as a route runner, getting into the defender’s pads to quickly knock him off base and then disengaging, getting himself open.

2. Auburn CB Jonathan Jones had his mistakes but he’s learned from them. And that’s what someone like Garrett talked about, specifically mentioning the ability to learn from your screw-up immediately. Beat badly on a double-move by a receiver I don’t have written down but was more patient when he saw it again from Sterling Shepard. Able to force the incompletion.

3. I worry about Minnesota WR K.J. Maye’s ability to create after the catch and win contested catches but he’s the crisp route runner I saw on tape. Nasty double-move, an out ‘n up, to win vertically with ease. Precise dude all around.

4. Sheldon Rankins continues to eat. Got under and shed Graham Glasgow on one run, stuffing Aaron Green in the backfield.

5. Harlan Miller just has a knack for playing the pocket. Quickly reacts to the receiver breaking down, letting him stay tight on routes, and contests every throw. On one catch, Miller positioned his left hand on the receiver’s hip for the tackle and then came in with a swooping right hand down through the hands of the receiver. WR held onto the ball but good technique from a small-school kid.

6. Baylor WR Jay Lee was criticized by the coaching staff yesterday but fielded a fine practice today. Certainly no issue winning vertically. Also had a sick one-handed catch against Cyrus Jones, though it came out of bounds.

7. Perhaps a quicker rise in Steelers’ fans hearts, safety Kevin Byard tracked, high-pointed and picked off Jacoby Brissett. One of the best plays of the day as the defensive coaching staff exploded, the coaches running downfield to greet him. That bunch has a lot of fun. High energy, much more than Dallas’ staff.

8. Some love to the kicker! Duke’s Ross Martin connected from 60 today, just sneaking over the crossbar. I’m not kicking expert but the dude has a leg. You can just hear it as he makes contact with the ball. A loud boom.

And the ones who struggled on the South Side.

1. The quarterbacks were all pretty meager today. Jake Coker had trouble with accuracy on the move, Jacoby Brisset was erratic, and Brandon Allen tucked and ran with the ball on three straight plays. Get the ball out, man. Dak Prescott was the best, I guess, but he was far from flawless, too. Some easy throws that were too low.

2. Paul McRoberts is a big dude and good athlete, giving him the recipe of a vertical threat. But he’s gotta time his jumps better. Hitting the triangle button too early. Smoked Cyrus Jones and should’ve made the play on a go route but jumped too early and the pass wound up being incomplete.

3. I’ll give Aaron Green credit for staying square and putting in top effort in pass pro but he lacks the strength to anchor. Eric Striker, not exactly a big fellow, knocked him out of the way easily in one rep. DeAndre Washington is dealing with a similar issue.

4. Cyrus Jones is fairly clean technically  and his competitiveness led to praise from the Jaguars’ coaching staff but his lack of strength is going to create an issue against big, strong receivers. So while there are some good reasons to compare him to Antwon Blake, there are clear differences. Jones has better footwork, Blake is more physical and powerful and plays the pocket with stronger hands.

– Again, very under prepared for this chilly Mobile weather. What a rookie mistake.

– Stood next to Dan Campbell today. Was hoping to be able to learn something while he scouted. All I learned is that he spit his chew a lot. But seems like a nice guy. Gracious enough to take a photo with a fan.

– Steelers are here, obviously, but again, don’t see them around the hotel lobby talking with players like virtually everyone else. They treat the Senior Bowl like a covert op.

– Went to a resutrant across the street. Had some great wings and a killer burger. All thanks to Touringplans.com for the meal. Needed it after this blustery day.

– Everyone here talks football. Everyone. The center of conversation, 100% of the time. It’s incredible.