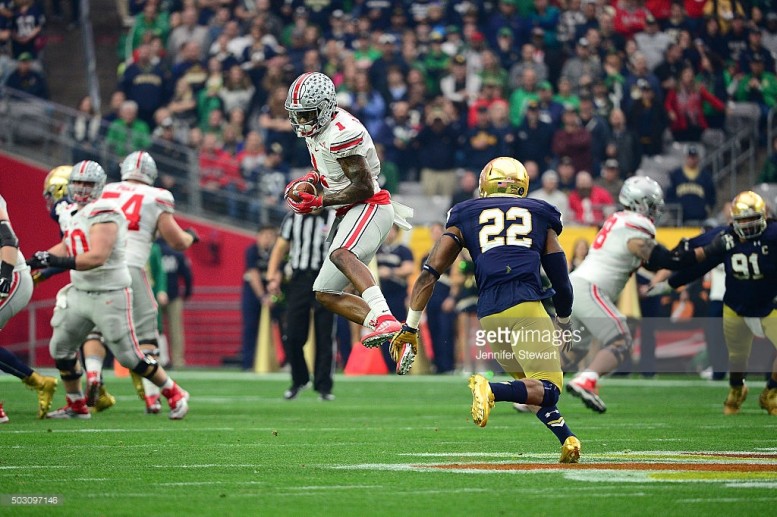 It’s yet to seen whether or not Ohio State quarterback turned wide receiver Braxton Miller can make it in the NFL as a pass-catcher but his path to the draft currently has him in Mobile, AL at the Senior Bowl attempting to prove that he can.

Miller, who measured in at the Senior Bowl at 6013, 205-pounds, said Tuesday that he wants to show scouts this week at the annual college All-Star game that he has traits in his game similar to that of Pittsburgh Steelers wide receiver Antonio Brown.

“AB, Antonio Brown, he’s the guy (I emulate),” Miller said. “He’s got athleticism and explosion. He can play inside and outside, so he brings both to the table.”

Last season, Miller caught 26 passes for 341 yards and 3 touchdowns at Ohio State after making the move from quarterback to wide receiver. However, he mostly played in the slot last season and will now need to prove he can play other spots as well prior to the 2016 NFL Draft.

“I love getting to go outside (against cornerbacks in single coverage). It’s a lot more fun outside. Either you will win or he will win, so it’s a chance to show out. Inside, you’ve got the safety, you’ve got a rotation guy, the linebacker, on the outside it’s one on one. Inside, it’s more traffic.”

Being as Miller is very athletic, he ought to test well at the upcoming scouting combine. He has nice size to go along with that athleticism, so that should help his cause as long as he can improve his technique and route running ability.

In 2002, the Steelers drafted Antwaan Randle El in the second round even though he didn’t have much experience playing wide receiver during his career at Indiana. Like Miller his college career began with him playing quarterback. Randle El went on to play 9 seasons in the NFL as a wide receiver and Miller is hoping to take a similar route.

While the Steelers appear to be stacked currently at the wide receiver position with Brown, Markus Wheaton, Martavis Bryant and Sammie Coates, it’s worth noting that they have drafted at least one wide receiver in 10 of their last 11 drafts. Because of that history, you can’t entirely rule out the possibility of another one being drafted in 2016.

On top of Miller attempting to show he can play wide receiver while in Mobile, he might also get the opportunity to show that he can return punts and that would certainly help his draft stock if he’s able to show some ability in that area.