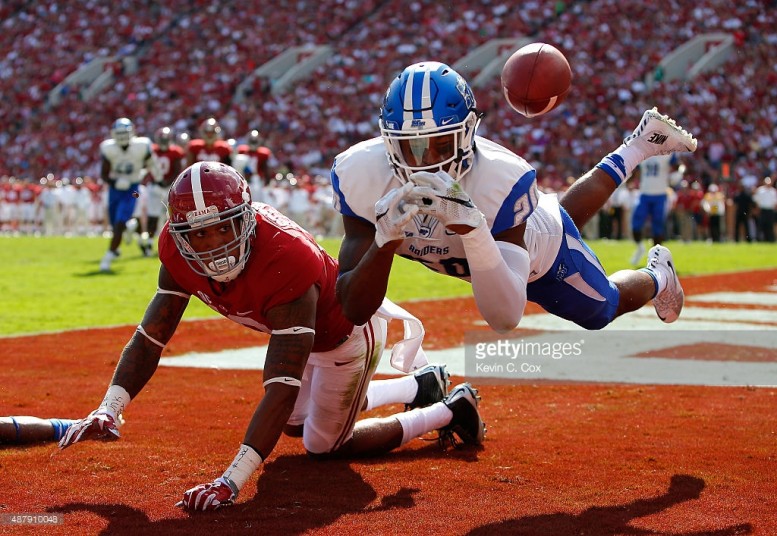 If you don’t know who Middle Tennessee State safety Kevin Byard is already, you probably will be well acquainted with him over the course of the next several weeks, if not sooner.

Byard is currently one of several players looking to improve their stock this week in Mobile, AL at the Senior Bowl and so far it appears as though he’s off to good start judging to by reports from those in attendance for the practices.

The Pittsburgh Steelers, as many of you know by now, certainly could use another safety in the 2016 NFL Draft and come to find out, Byard wouldn’t mind being part of their organization for more than just the obvious reasons.

“The Pittsburgh Steelers were my favorite team growing up,” Byard said back in early January, according to Aldo Giovanni Amato of the Daily News Journal. “I think I’d like to pick up where (former safety) Troy Polamalu left off.”

Between now and the scouting combine, Byard is looking to improve his 40-yard dash time.

“I think my film will speak for itself,” Byard said. “But what I’m really working on is my speed and cutting that 40 down. “I think the scouts think I’m going to run like a 4.6. So if I can cut that down, I think it should help me out.”

Before the 2015 season started, Byard admitted that he needed to improve his tackling. He did admit, however, that his best strength is his football IQ.

“I feel like I have a very high football IQ,” Byard said, according to CBS draft analyst Dane Brugler. “Knowing different situations, where the first down marker is. Also, my instincts and just having a knack for the ball. I want to get around the ball, fly around. I study the game and love football. I dedicate myself to studying my opponent before I step on the field.”

Prior to the start of the 2015 season, Byard was named a permanent team captain, so that’s something else to consider when it comes to evaluating his character. In Saturday’s Senior Bowl, Byard will be wearing No. 20 for the south team so add him so make sure to add him to your list of players to watch during the game.