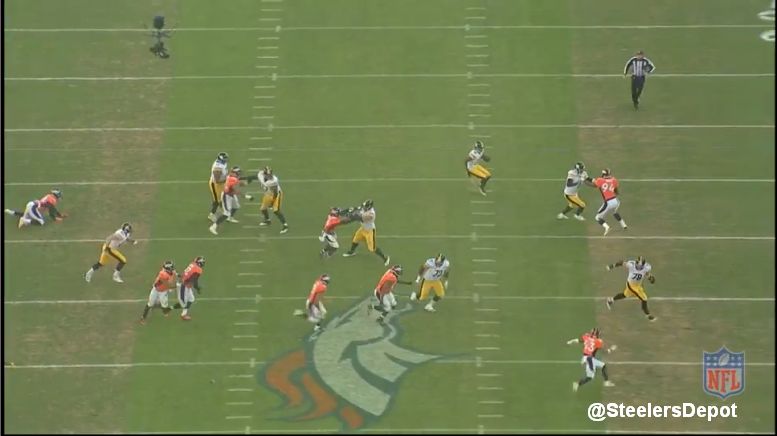 Your final game notes of the 2015 season. Abridged version because quite frankly, I don’t think you’re too terribly interested in relieving it.

– Great contain by Stephon Tuitt and Bud Dupree. Too bad Jarvis Jones loses backside contain, allowing the back to cross his face and cut back. 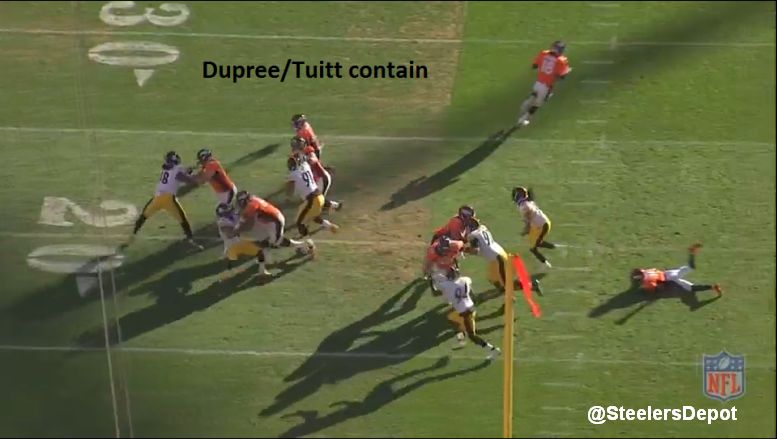 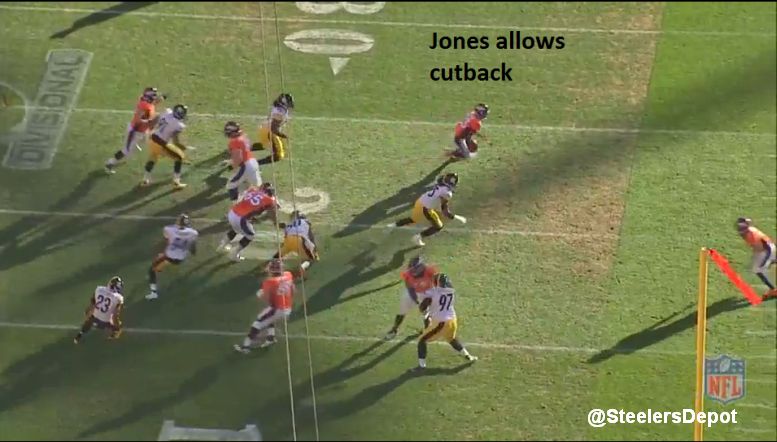 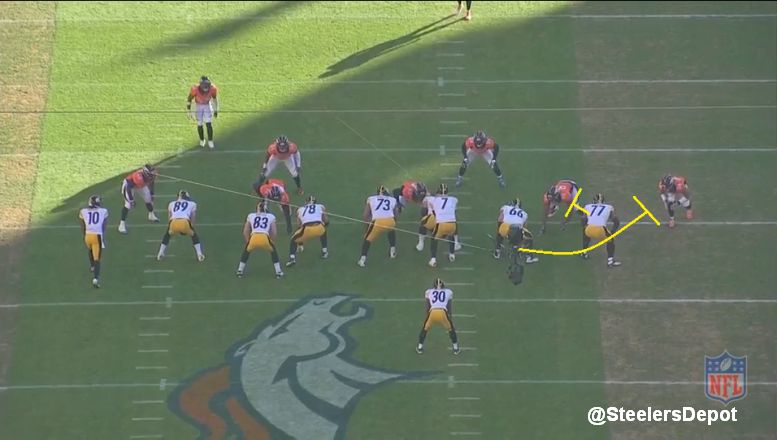 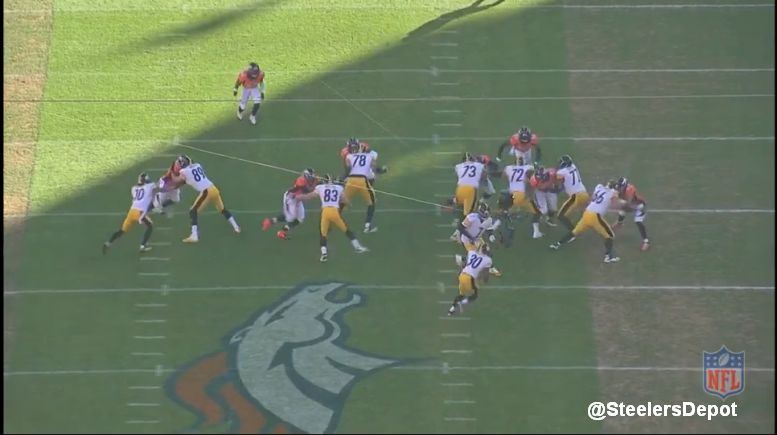 – Another look at Ben Roethlisberger having Heath Miller open on the 4th and 1 vertical shot to Wheaton. 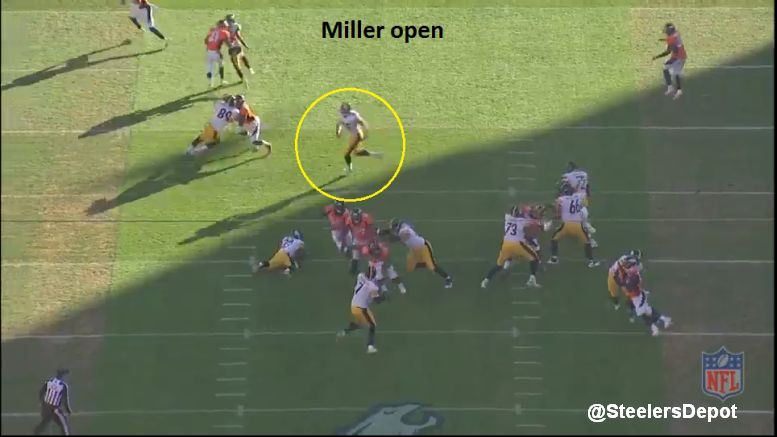 – PR team. Shamarko Thomas and Darrius Heyward-Bey as the gunners though on the first punt return, Danny Smith put in a wrinkle, he had them blitz with Antwon Blake and Ross Ventrone bailing to act as the gunners.

– Punt coverage. Shark and Ventrone started at gunner but Ventrone – for reasons that aren’t clear – was pulled for DHB after the first one. Will Allen and Spaeth the wings. Golden the upback. On the line: Williams, Garvin, Greg Warren, Chickillo, Spence. Moats started but Chickillo replaced him when Moats injured his pectoral.

– Great flow and ability to shed the tackle by Stephon Tuitt.

– Steelers got creative with their blocking schemes against a Broncos’ team that is tough to run on straight up. Arc block by Heath Miller on Martavis Bryant’s end around and here, they use motion to get DHB as a lead blocker through the hole for a 15 yard gain. 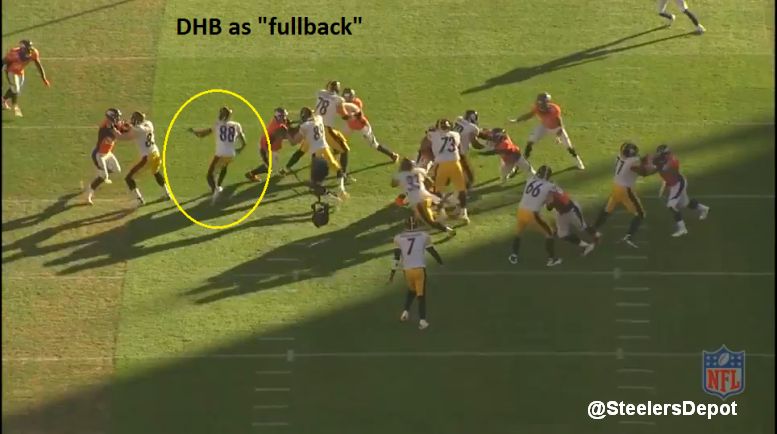 – Here’s a shot of DeCastro shoving the very talented Derek Wolfe down the line. Not many can do it. 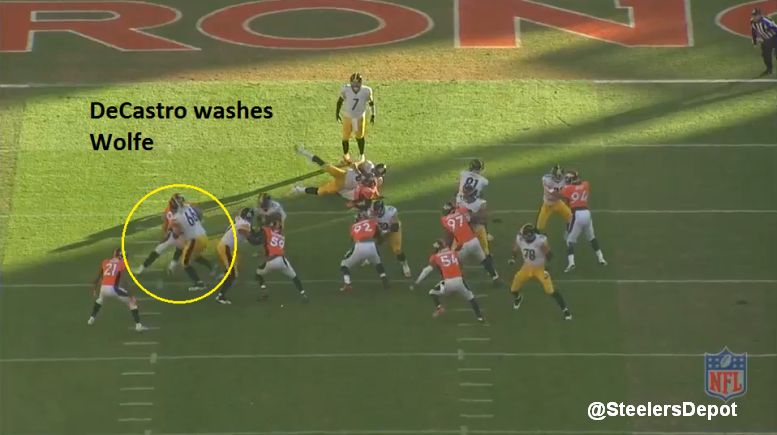 – Alejandro Villanueva walked back into Roethlisberger. 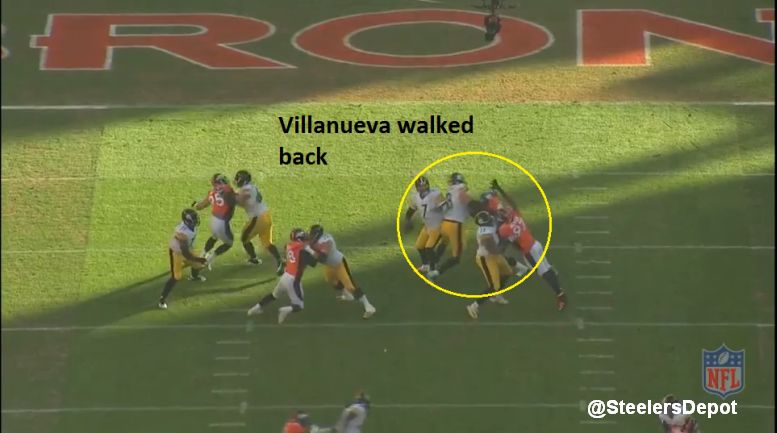 – Steelers used a lot of four man pressure, blitzes and standard rushes with a stunt, to create pressure. Nice gameplan by Keith Butler.

– Martavis Bryant definitely could’ve gotten the first down if he cut inside on this end around.

– Stephon Tuitt and James Harrison defeat their blocks, stuff the run at the line.

– Lawrence Timmons didn’t have a great game against the run. Sealed here and there’s no run fill. 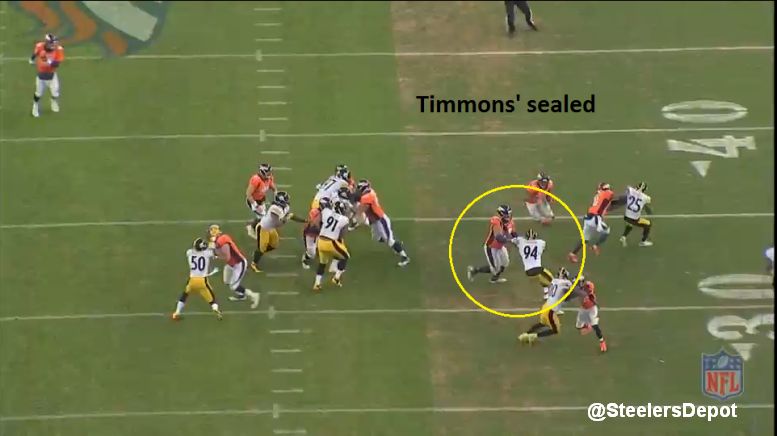 – Harrison versus a running back? Yeah, Deebo is going to win that one every time. Sacks Peyton Manning. 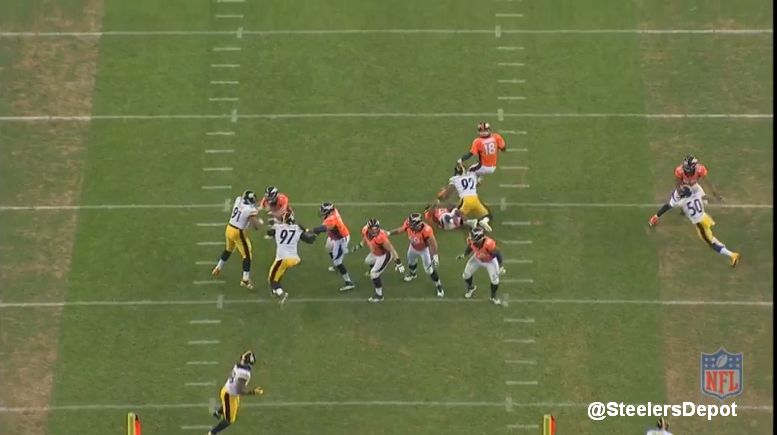 – Ventrone did replace Moats along the front line on kick return units. Not that the Steelers ever actually were able to return one.

– Good pass pro from Fitzgerald Toussaint to pick up this blitz. 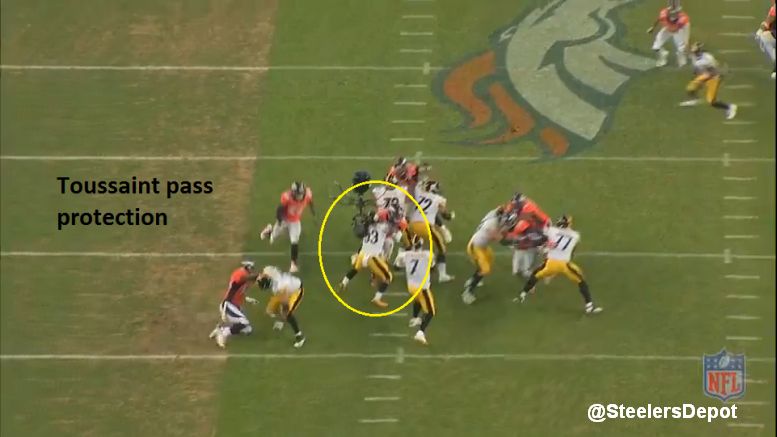 – Chickillo not square to the line on this punt and in a bad mismatch with Derek Wolfe, who blows right past and nearly blocks the Jordan Berry punt. 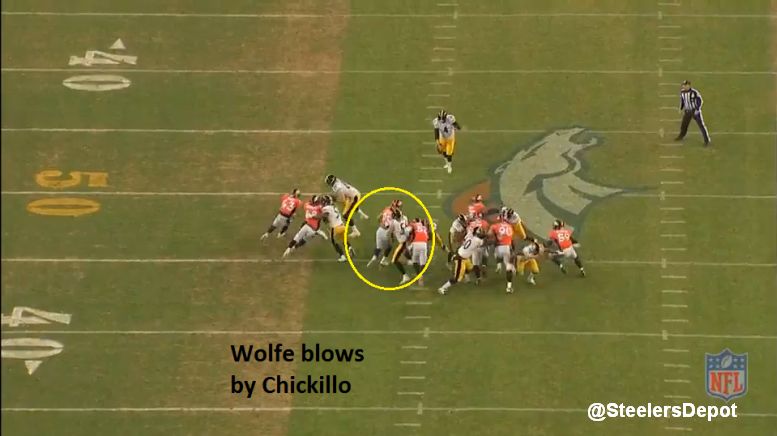 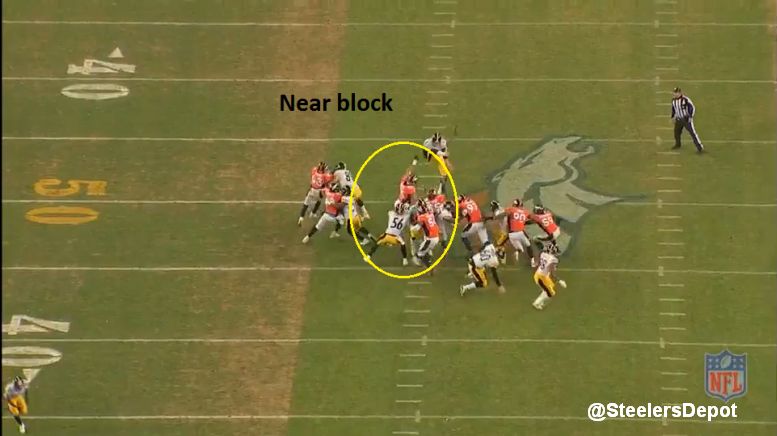 – Todd Haley finally worked off the bubble screen, faking it and throwing vertical to Jesse James for 22. Too little, too late.

– Defensive line has to stay on their feet on these zone runs. 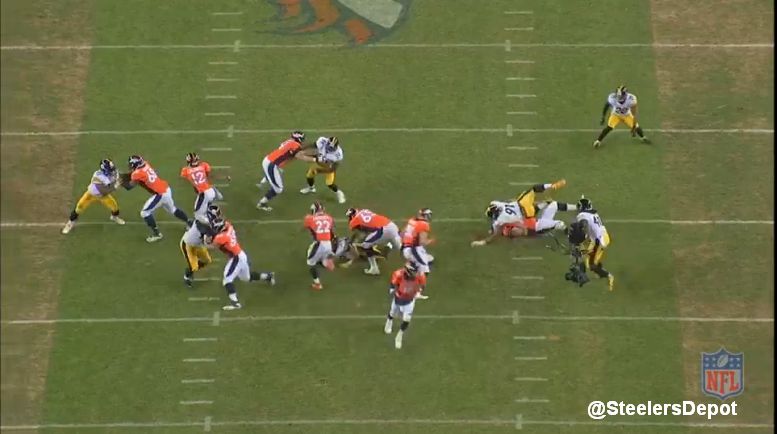 – Nice job by Bud Dupree to keep his outside arm free, get off the block, and make the block. 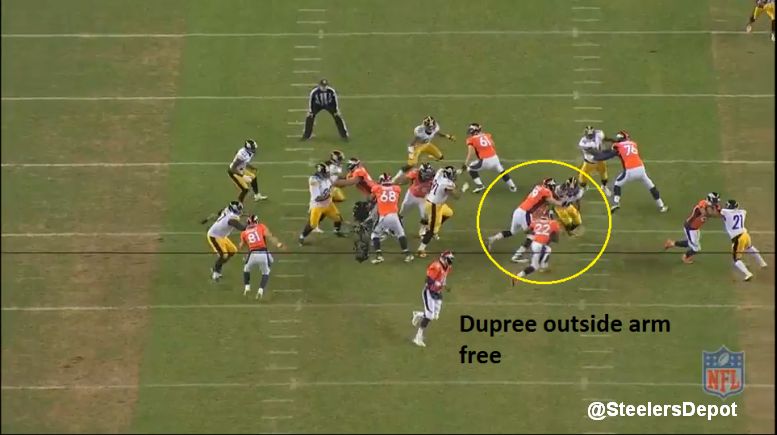