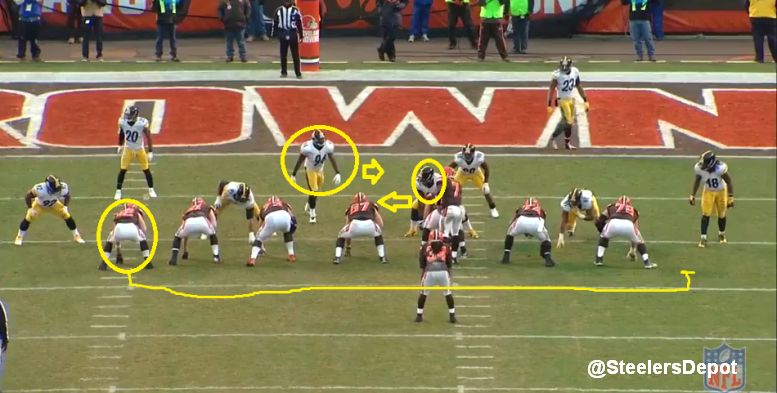 The Pittsburgh Steelers defense front seven has seemingly been playing better every week. The unit up front has allowed only 91.2 rush yards a game, good enough for fifth the league. Pair that impressive number with a second best minuscule six rushing TDs and you have a truly top-end unit against the run. The Steelers also are third in the league in sacks; with an impressive forty-eight sacks, forty-one of which are credited to the front seven. Clearly the men in the middle of the action are a strength for the Steelers defense. Perhaps the best thing about the front seven is everyone is chipping in, not one player has more than eight sacks. This week though QB pressure would be key against a good Cleveland Browns O-line and a QB once again thrown into the mix with little notice. In this must win game the front seven would prove to be essential yet again.

The first place we will examine takes place in the first quarter, as the Browns face 2nd and 17 at their own thirty-one. The Browns spread the field with 11 personnel in a shotgun set and the Steelers counter with their nickel package. Cleveland tries to catch the Steelers by surprise by running a 26 power sweep. The key blocks for Cleveland are the down block on the two technique Stephon Tuitt and the tight end walling the outside linebacker Arthur Moats to create an ally.

Pre-snap Cleveland has pretty much every advantage on this play. This is all eliminated as the ball is snapped though. Tuitt fights across the down block and controls the right tackle Mitchell Schwartz, down the line of scrimmage. Thus closing the gap from the inside. On the outside Moats does not allow himself to be washed down the line of scrimmage and instead beats the block by Gary Barnidge. Moats does a great job of keeping his leverage and giving Crowell no outside option. The backside pursuit by Harrison and Hayward eliminate any cutback lanes as well. The front four effectively turned a less than desirable situation into a no gain.

This play takes place in the second quarter as the Browns are approaching the Steelers red zone. Once again the Browns come out with 11 personnel, but this time the QB Austin Davis is under center. Cleveland runs an outside zone play behind their left tackle. Obviously sealing the edge is paramount to this plays success. That is exactly what outside linebacker Jarvis Jones needs to prevent. This is no easy task against all-pro left tackle Joe Thomas however. Jones does a kind of hop step and squares up with Thomas. This allows for an easy reach for Thomas that Jones cannot recover against.

The next most important blocks will be on Cam Heyward the one technique and on the scraping play-side linebacker Ryan Shazier. After a quick punch left guard Austin Pasztor gets to the much smaller Shazier and takes him for a ride towards the sideline. Perhaps the most impressive block though- is the reach on the one technique Heyward- by former Pro Bowl center Alex Mack. This combination of good blocking by Cleveland and poor execution by Pittsburgh results in a 7 yard gain by Duke Johnson.

Early in the second quarter the Browns have the ball at the Pittsburgh Steeler forty-five with a fresh set of downs. Cleveland comes out with 12 personnel in a balanced tight set. Cleveland attempts to run a 25 split zone play. Nose tackle Steve McLendon had a different idea.

McLendon gets an excellent jump off the snap; and with good leverage gets five yards of penetration, forcing Isaiah Crowell to cut back the second he gets the ball. McLendon also blows up the pulling tight end that is supposed to be freezing the linebackers and sealing the backside. McLendon really sets this play in motion for the Steelers front. Tuitt does a decent but not great job against a double team and is actually reached by right tackle Mitchell Schwartz. This does not matter though because Crowell is forced to cut directly into him. Unlike most of these clips this one really is a one man wrecking ball of a play by McLendon. Kudos to the rarely celebrated nose tackle.

Midway through the 3rd quarter the Browns offense is once again working with a 1st and 10 this time at their own 27. Similarly- to the first play we viewed- the Browns spread the Steelers out with 11 personnel and a shotgun set. This forces the Steelers to tap into their nickel package again. Cleveland dials up a 26 power right into the teeth of the Steelers defense. Cameron Erving and Schwartz double team Tuitt and Erving peels off for the linebacker Shazier. Schwartz gets an excellent jump off the ball and washes Tuitt 4 yards from his pre-snap position.

Outside linebacker Bud Dupree is slow off the ball and allows tight end Jim Gray to wash him down the line of scrimmage. Finally linebacker Lawrence Timmons goes to grass and fills the gap left by Dupree; unfortunately for him, he runs directly into a pulling guard for an easy kick out. The only bright spot on this entire play is Ryan Shazier. As he is able to avoid Erving and trip up Crowell. This was a mere few inches away from being a much bigger play.

Later in the third quarter the Browns have the ball at their own 36 and are faced with a favorable 2nd and 1. Cleveland comes out with two tight ends to their strong left side. Predictably, the Browns run to the left behind their all pro and both tight ends. At the snap of the ball Pazstor does a pretty good job reaching Heyward. Thomas also does a good job and washes Timmons well away from the play. McLendon, on the contrary, defeats the center and stays parallel to the line of scrimmage if a cut back occurs. This is exactly what happens, and the former Defensive Player of the Year James Harrison, is the reason why. Harrison is lined up outside of the wide tight end and as the ball is snapped slants towards the inside tight end driving his arm and shoulder into Dray’s chest.

Harrison plays with such strength and leverage he easily overwhelms the tight end and gains four yards of penetration. This forces Crowell to cut back immediately into the waiting arms of nose tackle McClendon. Superb individual efforts by Harrison and McLendon take this 2nd and 1 and force them into a 3rd and 2.

Here the Browns are in a seriously threatening position at the Steelers eleven yard line, late in the third quarter. Initially Cleveland is strong to the left but Barnidge motions across the line of scrimmage. This causes the Steelers front seven to shift pre-snap as well.

Cleveland will dial up the split zone again, however this time they will run it to the right side. As previously stated the split zone is designed to freeze the linebackers as well as open up a potential built in cutback lane. 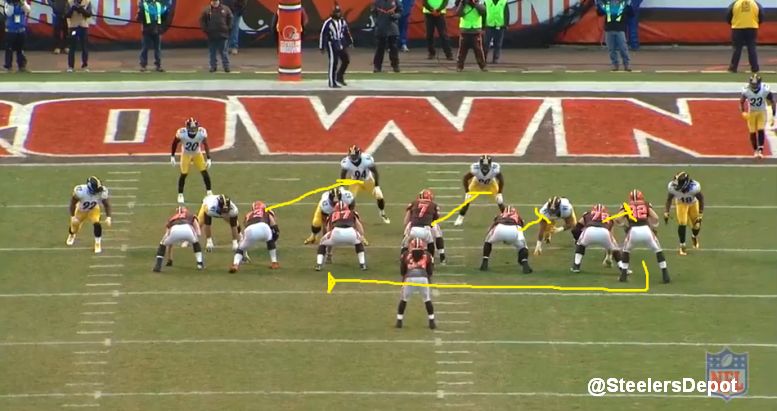 This play needs a few key blocks for it to be successful. Mack must get to Vince Williams the play-side ILB. Erving needs a good push on Tuitt or at the minimum to shield him from the ball carrier. Schwartz cannot allow any penetration and ideally wins the edge. 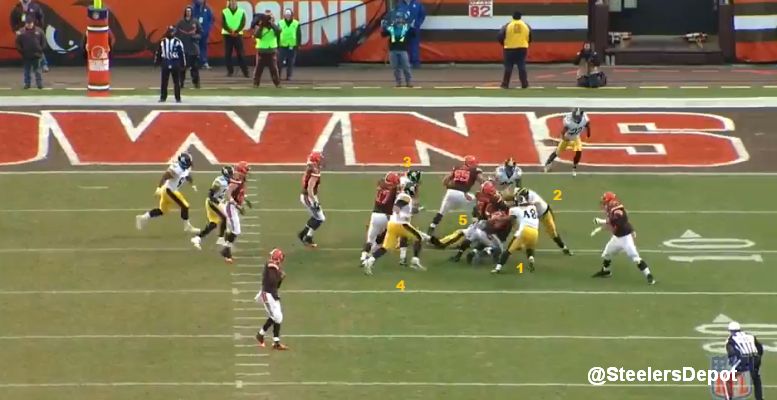 This was a very dominating performance by the Steelers front seven. The Steelers defense only allowed 326 yards of offense all together. They held the run game in check to a tune of 23 for 86 yards for a 3.7 ypc and no Tds. The front seven also provided the pressure when Davis dropped back to throw, accounting for five of seven sacks. Individually, Tuitt and Harrison really stood out both had big time plays and were very consistent.

In contrast the worst showing out there belongs to Jones. Jones was held completely off of the stat sheet and was rarely around the ball in his limited play. For my money the Steelers best two OLB’s have been Harrison and Moats. It would be nice to see Moats get a few more snaps this week against hated rival Cincinnati Bengals. All in all a great way for the front seven to finish the season, and hopefully they can carry that pass rush into Cincinnati.