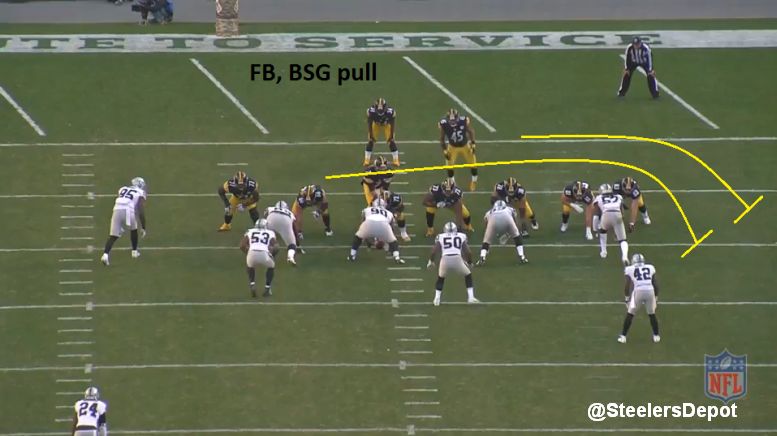 It’s a play you’ve seen the Pittsburgh Steelers run a hundred times. It’s been given different names over the years: Georgia Counter, 22 Double. But in a general sense, the play is known the same to all football analysts: Counter Trey.

As the story goes, the Counter Trey was created by Tom Osborne’s Nebraska offense, borrowed by Joe Gibbs and given the Washington Redskins’ success, by the rest of the NFL. As you’ll see the Steelers and so many other teams use, the concept has two main components. Backside pulls from the fullback (or tight end) and guard with the frontside of the line down blocking. Almost like a pin and pull scheme. This was referred to as the Dallas Cowboys’ 36 and 37 series when Todd Haley was with the team. 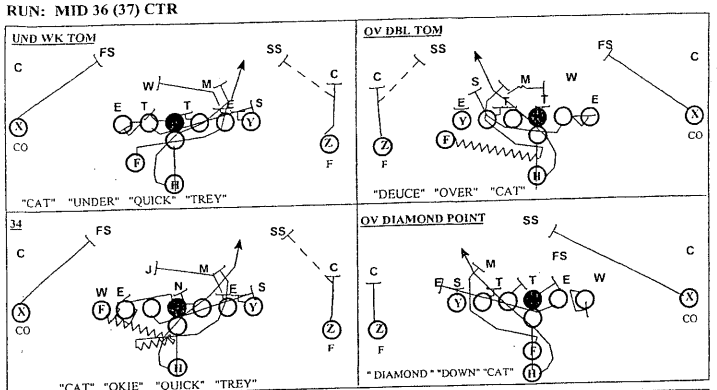 Here we’ll see the Steelers run it in Week 9 against the Oakland Raiders. They motion Roosevelt Nix across the formation but his role hasn’t changed. He and right guard David DeCastro will pull to the playside. Nix takes the first threat and DeCastro the second. Use your angles to seal, all depends on how the defense attacks it, and create an alley.

To the frontside, Heath Miller is going to down block the right outside linebacker, the end man on the line (EMOL). After the left tackle has secured the block, Miller will work to the second level and pick up the Buck linebacker scraping over the top. This blocking scheme can change slightly, we covered it way back when we broke down Haley’s playbook, depending on the defense’s alignment.

If the EMOL had lined inside the tackle, giving the tackle leverage, Miller wouldn’t have had to chip and could immediately get to the second level. If the EMOL is lined to Miller’s outside shoulder, the tight end is likely to base block him, sealing him to the outside. It’s all about what you can leverage, a critical word for any successful blocking scheme. 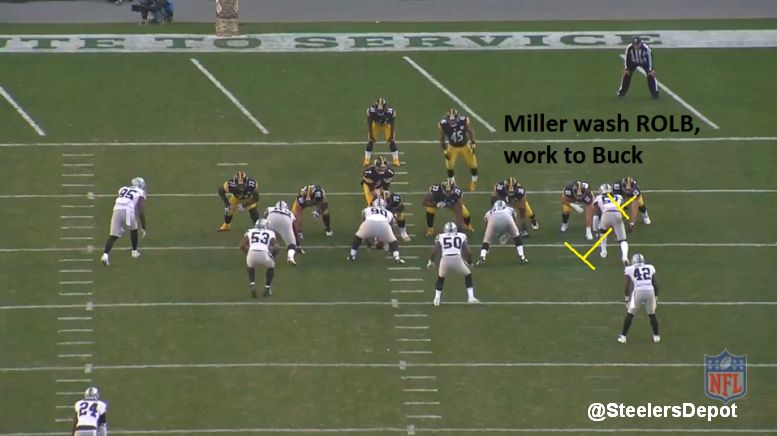 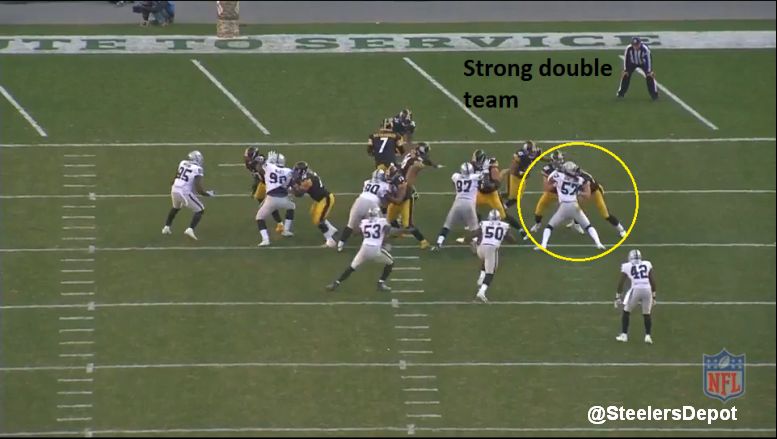 Nix and DeCastro do a great job engaging and sticking to their blocks. Nix kicks out the corner while DeCastro seals the safety, creating a big lane for DeAngelo Williams. Because of the heavy look and box response from the Raiders, once you cross into the second level on the perimeter, there is no longer a DB to fill the alley. Nothing but open grass until Williams gets tracked down out of bounds 53 yards later. 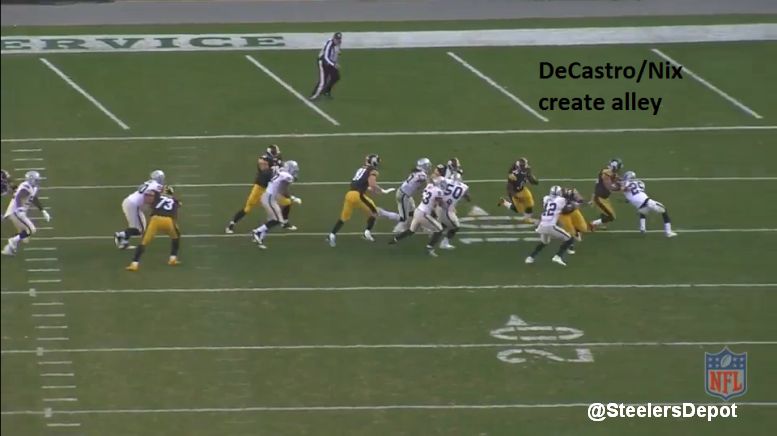 This will be more difficult to run with the loss of Roosevelt Nix, and one of the reasons we’ve harped on why that is a bigger void than maybe meets the eye. I’m anxious to see Haley get creative with the personnel. Would hate to see him scrap it altogether because it’s a successful play that is a refreshing change of pace from the octane 11 personnel the Steelers use 70% of the time. Miller would be a logical candidate while Will Johnson, even though he’s an inferior run blocker, has the athleticism to reach his spot. And it’s more about leverage and technique than it is brute strength.

When the Steelers want to go smash mouth against the Cleveland Browns’ worst rush defense today, this is a play I’m busting out.