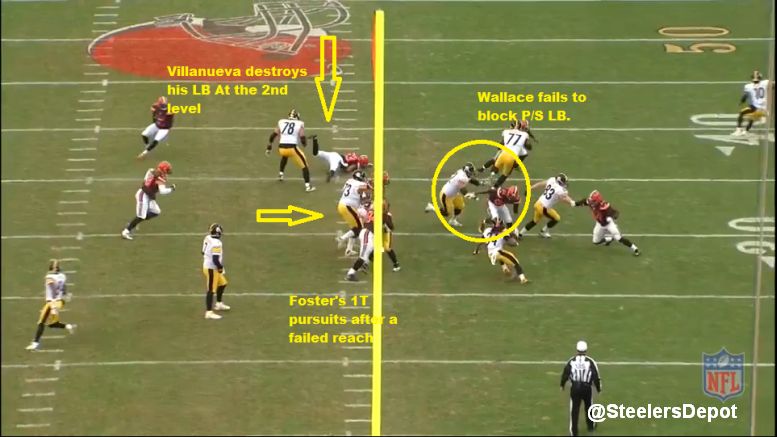 The Pittsburgh Steelers played with their season on the line last week against the Cleveland Browns. The Steelers, as we all remember I’m sure, needed a win as well as some help from the Buffalo Bills. Last time these two teams met each other the Steelers massacred the Browns through the air, behind a legendary “come off the bench” performance by Ben Roethlisberger. Adversely the team couldn’t muster much on the ground-netting only sixty yards for 2.9 ypc- against a very tough Browns front seven. Would this game be different? Could the Steelers OL keep Ben upright and allow for some lanes for DeAngelo Williams?

Here we catch up with the Steelers early in the second quarter on a 1st and 10 at their own forty-four yard line. The Steelers come out with 12 personnel and two tight ends to the right. They run a little motion 23 play action pass play.

The Browns drop seven and rush four against the Steelers five offensive lineman and tight end. Villanueva is on an island verse linebacker Nate Orchard and sets at a 45 degree angle to him. He benefits from a small chip block from DeAngelo Williams, but Orchard never gets near Roethlisberger. On the inside Foster and Wallace combine for a double team on three technique and do it with ease. The duo stones Desmond Bryant at the line and he never gets further than that. On the other side DeCastro and Gilbert chain together for a double team on Randy Starks. Although DeCastro loses his balance for a moment he and Gilbert do an efficient job keeping Starks away from the quarterback.

The key to a good double team in pass protection is staying square and hip to hip; that’s something we see on both of these blocks. The Wallace / Foster combo being the better of the two examples. On the right side tight end Heath Miller takes an aggressive set to edge rusher Paul Kruger. Miller keeps Kruger about as far away from Roethlisberger as possible. There are not many tight ends who can successfully pass protect against a good edge rusher in the NFL. Miller is certainly the exception and not the rule. Ben throws the ball at nearly four seconds and from the looks of his pocket, could have spent another second standing there. A fine example of what pass protection can be like when the offensive line works as a unit.

On the Steelers first drive they encounter a 1st and 10 at their own thirty-three. The Steelers spread the Browns out with it in 11 personnel formation trying to surprise them with an inside run. At the snap Bryant splits the double team of Foster and Wallace blowing up the play and forcing Williams to cut back. At the same time DeCastro whiffs on an attempted punch on Starks, allowing him to get up field.

If not for a shove by Gilbert this one yard gain is most certainly a tackle for loss. Part of the play is Heath Miller pulling across to freeze the linebackers. He is not expecting the running back to come directly behind him and although he walls Kruger, Miller does very little in creating space for Williams. Another shining example of the play being won or lost in the trenches.

We are early again in the second quarter, but this time the Steelers are faced with a 2nd and 10 at the Browns thirty-seven. The Steelers come out in a balanced 12 personnel formation and the Browns counter with their base 3-4. Similarly to our last play Miller pulls away from the place side to freeze the linebackers and wall the backside pursuit. This is key and allowing Marcus Gilbert to get to the backside linebacker Karlos Dansby. Gilbert and Matt Spaeth do an excellent job on their double team as Spaeth overtakes the down linemen and Gilbert peels off at the proper time to make a good block on Dansby.

DeCastro has the task of blocking rookie nose tackle Danny Shelton. Fortunately for DeCastro; Shelton is caught peeking into the backfield and overruns the play, anticipating what Williams will do. This allows DeCastro to just simply wash him past the hole. Wallace is without a doubt expecting to go to the second level and more than likely pick up the backside linebacker scraping over the top. However, the three technique Jamie Meder slants directly into him. Wallace does a great job adjusting, and does just enough to wall Meder away from the running back, despite some penetration.

Foster also has to adjust as his pre snap assignment. Linebacker Craig Robertson blitzes into the “B” gap and Foster is able to stop his momentum. Foster may not have blown him off the ball but sometimes a great block can be doing just enough in a tough situation. Villanueva steps at a 45 degree angle with his left foot. This indicates that he is trying to sell a pass play and bait the edge rusher to run a field. Linebacker Cam Johnson takes the bait and runs himself out of the play. This makes for an easy wall block for the hulking left tackle. Despite a blitz from Cleveland and an instantaneous change to the blocking scheme the Steelers front is able to adjust on the fly.

Later on that same drive the Steelers are up against a 3rd and 4 at the Browns thirty-one. The Steelers decide to spread the field with 11 personnel and a shotgun set. The Browns decide to rush 6 coming with a double a gap blitz. The quick pressure forces Roethlisberger to throw the ball early resulting in only a one yard gain. This would eventually lead to a missed field goal, but let’s take a gander at how this pressure got home.

Wallace is late to react to the blitz after he snaps the ball. This allows Kruger to cross his face and beat him to his right. DeCastro is a free blocker here but his eyes go to the three technique first and by the time he looks inside, Kruger is past him. Another thing worth noting is in the play prior, starting running back DeAngelo Williams left the game with an injury. This leaves Fitzgerald Toussaint in a precarious situation against a blitz. Toussaint initially tries to help Wallace with Krueger but then realizes that Dansby is directly behind Kroger. Toussaint has now overset and cannot recover to adequately block Dansby. A nice Blitz from Cleveland and near perfect timing from Kruger and Dansby result in lightning quick pressure that forces a fourth down.

The Steelers last play of the first half is a run to the right side with motion behind it to freeze the backside pursuit. 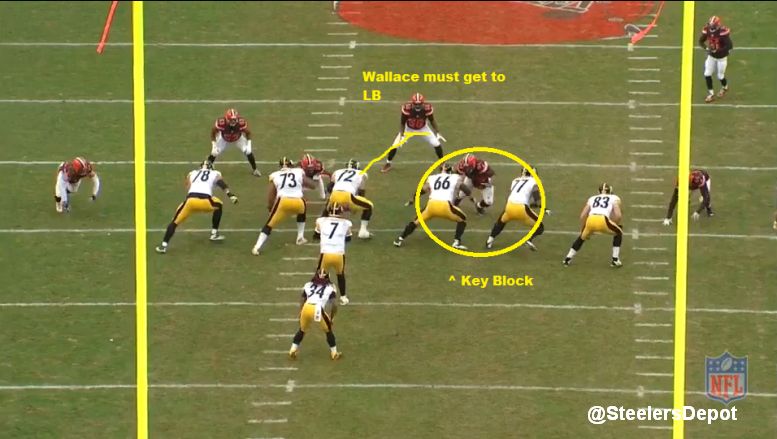 The key blocks are as highlighted, as well as the kick out on the right side defensive end and the back side seal of the one technique. These blocks would allow Williams to have options and a design cutback lane. 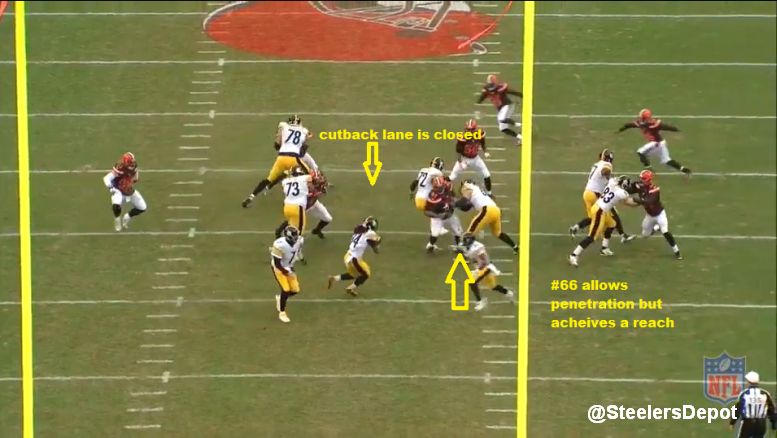 Although DeCastro gets his reach block it is far from ideal. The amount of penetration forces Williams to go sideways prior to going up field. Foster fails to get a solid reach on the 1T and that coinciding with where DeCastro’s man is eliminates the cutback as a viable option.

The wide angle Williams is forced to take makes Wallace’s block much more difficult and he cannot complete it. Foster never gets his reach block to wall the 1T from the play. Miller also gets beaten on the far right of the screen. So very quickly Williams’s tiny crease disappears and the Steelers lose a yard. Villanueva made perhaps his most impressive block to date. Showcasing his special athleticism, he gets to the second level and destroys the backside linebacker.

This was not one of the Steelers best showings up front. The Steelers were very successful in the air once again, however they were anemic in the run game. The Steelers gained only thirty yards on nineteen carries for an abysmal 1.9 ypc.

Danny Shelton’s man handling of Cody Wallace played a role in poor rushing numbers. This flat out won’t cut it in January, and the Steelers will be exposed if they remain so one-dimensional. Despite the two penalties and poor showing on the ground there were some positives.

Ben was not sacked for the entirety of the game and Villanueva played perhaps his best game since coming in as a pro. Heath Miller continues to be a shining example of a “throwback” complete TE. This was probably the worst game DeCastro has had all season- with that said- he was still only a -1. He better forget this game quickly as next week he faces elite 3T Geno Atkins again. Gilbert continues to be solid and will need to be even better against a very good Bengals front seven. In fact the entire offensive front will need to be improved to win against the Bengals Saturday.