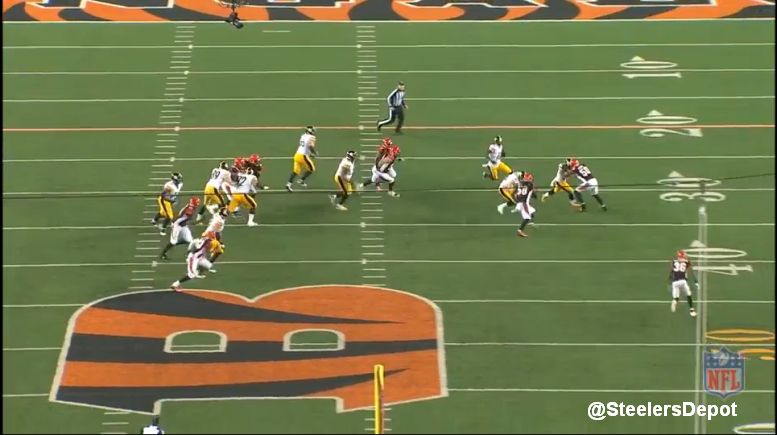 The Pittsburgh Steelers came into this week’s performance against the Cincinnati Bengles a beat up bunch. Starting running back DeAngelo Williams would not play and that would put even more pressure on the offensive line to get the job done. The offensive line will need to step up and clear a path for backup running back Fitzgerald Toussaint in order for the Steelers to stay balanced. This also will put pressure on them in the pass game, as now the respect for the run is reduced. Unlike against the Browns, this defensive line boasts Pro Bowl defensive tackle and defensive end as well as some very good linebackers. Would the big men be up to the task?

The Steelers take the field in a heavy 13 personnel set. The call is to Toussaint and he quickly cuts it back. Foster and Wallace double team the one technique and get very good push all the way into the linebacker. Meanwhile tackle Villanueva and Miller also do a text book double team and overtake. Thus opening a nice hole for Toussaint and allowing him to get almost eight yards before contact.

Now we fast forward to the midway point of the second quarter. The Steelers dial up a weak side run to their left side. The most important blocks here are a successful block by Villanueva and Foster sealing off the defensive tackle. Villanueva loses ground and allows the defensive end to set the edge. This forces the running back inside where he meets the linebacker and one technique. Altogether poor rep by the left side.

Early in the third quarter the Steelers get the ball back after a turnover and decides to pull a trick play out of the hat. The play calls for backside guard David DeCastro to pull and seal the defensive end as well as backside tight end Heath Miller get out in space and make a block. Both Steelers execute their assignment to perfection; and combined with a good block from Todman, open up a seam for Bryant and he does the rest.

Late in the fourth quarter the Steelers come out in a balanced 12 personal formation. They attempt a 26 stretch play however it is strung out for no gain. The backside one technique gets excellent penetration off the snap forcing Jordan Todman to go outside early. Right tackle Gilbert also gets driven back, thus making Todman’s path out of the backfield that much more difficult. This horizontally movement allows the Bengals defense to flow for and easy tackle for no gain.

Here the Steelers come out with that familiar balanced 12 personnel formation. The Steelers call a 25 stretch play. The key blocks will be the double team by Foster and Wallace as well as Villanueva sealing the backside. Villanueva does an excellent job turning his defensive end and walling him from the running lanes. Foster gets out to the middle linebacker and shoves him past the play. Wallace may make the most important block as he reaches the one technique all by his lonesome. In the process opening up a huge hole for Todman to run through.

This was not one the Steelers offensive line’s best performances, especially by the numbers. The Steelers only threw the ball for 202 yards despite thirty-six attempts. The hogmallies had a tough time keeping Ben Roethlisberger upright and his jersey clean. Roethlisberger was hit nine times and sacked four of those times. It’s not all on the OL though as we all know Big Ben likes to hold the ball sometimes.

On the contrary the Steelers experienced much more success – on the ground than – just about anyone expected.  The Steelers ran the ball 29 times for a very respectable 167 yards. That is nearly six yards per carry. The OL opened holes and cleared space all game, but they did more than just block. The Steelers and Bengals game was overly physical and at times just plain dirty. The Steelers OL set the tone and really didn’t back down when things got chippy. Right in the middle of all the commotion were the interior three: DeCastro, Wallace and Foster.

The big men will have their hands full once again against an elite Bronco front seven. Pittsburgh will need to keep Big Ben upright to have any chance on Sunday.