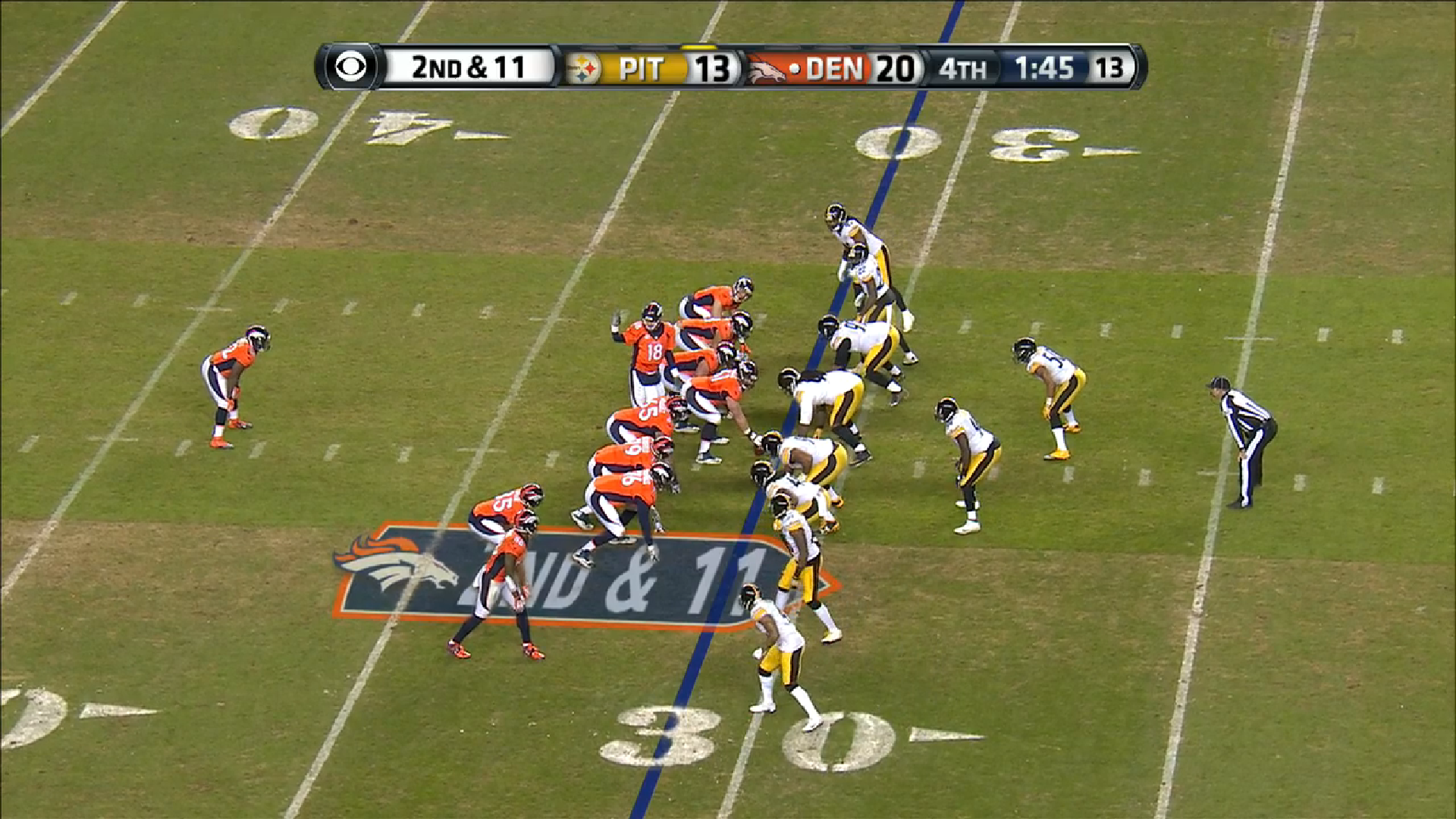 Against the Broncos on Sunday, the Pittsburgh Steelers defense lined up to face the Broncos offense on 72 plays, excluding field goals and kneel downs, but including penalties, both pre- and post-snap. And in spite of the fact that Peyton Manning has shown a significant physical decline this season, they still greatly respected his throwing ability.

In those 72 plays, the Steelers ran just eight out of their ‘base’ 3-4 defense, with three down linemen and four linebackers on the field. Of course, the traditional look is really no longer their base defense, and this game was a perfect example of that.

On the other 64 plays, Pittsburgh lined up with at least five defensive backs on the field, in spite of the fact that the Broncos were not that far away from a 50/50 split between running and passing. Officially, they ran 71 plays—my numbers include a neutral zone infraction—33 of which were runs, with the other 38 being drop backs, one of which produced a sack.

Of the eight base defense looks, six came against the run. The first time the Steelers reverted to their 3-4 front was on the final drive on the first half after they were able to pin the Broncos back deep. Denver ran on the first two plays, the second of which produced a 34-yard run, and put the 3-4 back on the sideline for the next 14 defensive snaps.

The next time the base defense came up was to start the second drive of the second half. Manning responded by checking into passing plays, the first of which produced a 19-yard gain. An incompletion and a second and 10 play put the nickel defense back on the field.

The only other time the Steelers played their base look was toward the end of the game, after the Broncos had already scored the go ahead, and what would eventually prove to be the game-winning, touchdown.

Pittsburgh go the ball back with three minutes to play, needing a touchdown just to tie the game, but instead, they quickly flamed out, starting the drive with an 18-yard pass, only to follow it up with four straight ‘failed’ plays, culminating in a sack and a turnover on downs at just the 31-yard line.

If the Steelers had any hope of coming back at that point, a defensive stand was essential, and figuring the Broncos would choose to milk the clock, they put their 3-4 defense out on the field in order to stop the run. They did so successfully, preventing any yardage on first and second down and holding the third-and-11 play to a four-yard gain.

Denver went on to kick the field goal—having already started in field goal position—that made it a two-score game, and while the Steelers managed to respond with a field goal of their own, they failed to recover the onside kick, which left just the kneel down to end the game.

On which, technically, Pittsburgh fielded its base defense, which hardly played much of a role in this game, and which has seen decreasing relevance, especially this season. Even facing a three-play goal line stand, the Steelers stuck to their nickel, rather than their 3-4 or even goal line defense. Some of that is the Manning factor, but it should tell you how significant the ‘base’ look now is.