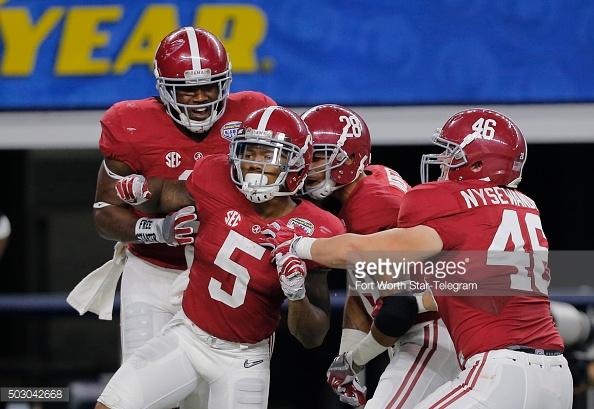 By the time you’re reading this, the weigh-ins will have likely started for the 2016 Senior Bowl. But before we get things kicked off and all the ensuing craziness over the next three days, I want to take one close examine at the grop of defensive backs I’ll be watching throughout the week.

Though I’ve been adamant that I don’t believe the Pittsburgh Steelers will take a cornerback high, they will take one, probably sometime during the mid-rounds. And strong safety could be their biggest need, depending on what the team thinks of Robert Golden and if he wants to return if not given assurance of the ability to compete for the starting strong safety gig.

There are plenty of several interesting defensive backs. We talked about a few in my preview on Sunday but we’ll go through them again along with some other players I haven’t mentioned. A brief scouting report on each.

The Good: A little undersized but plays big. Physical corner who will come up and support the run, a prerequisite for a Steelers’ cornerback. Technician who plays the pocket with the ball in the air and does a nice job of staying in-phase in coverage. Quick feet and short-area burst. Offers a vertical and able to high-point the football.

The Bad: Over-aggressive and can get caught peeking in the backfield. Lack of size can hurt him against bigger, more muscular wide receivers. Laquon Treadwell gave him fits and scored on his twice.

The Good: Tall, long cornerback who won with his size and length routinely at the FCS level. Better athlete than you might expect and doesn’t show the stiffness in his turn from such a tall guy. High-motor guy who doesn’t quit on plays. Appeared to move to safety and was willing and competent alley defender versus the run.

The Bad: The move to safety clearly made him uncomfortable and he looked lost out there, taking poor angles and getting fooled on his keys. Small school guy will always work against him. Tackle angle needs to be higher and needs to play the pocket with the ball in the air.

The Good: Quick, twitchy guy who can compete with the big boys. Able to find and high point the football. Change of direction is impressive, good feet, punt returner and that skillset carries over on defense. Played field and boundary. Zero stiffness.

The Bad: Obviously an undersized kid without a lot of muscle. Doubt he is 5’10. Do appreciate his ability to stay in-phase and not look back for the ball but can get a little grabby and too many interferences called against him. Tries against the run but will naturally get washed, stalked block by bigger WRs.

The Good: Attacking player with the ball in the air. Wants to make every big play. Has size and frame to grow into teams gravitate towards. Plays the pocket well. Field and boundary corner.

The Bad: Over-aggressive and struggles to read his run/pass keys. Isn’t processing as quickly as he needs to. Times where he should make the safe play and break the pass up, but chooses to go for INT. Didn’t face great competition, Ohio was the top squad he saw in 2015. Didn’t play an FBS team in 2014.

The Good: Little bit of Justin Bethel, little bit of Mike Mitchell, though Carson is a little taller than either and not nearly as built as Mitchell. Dominant special teamer with five blocks the last two years, played on nearly every unit, including his senior year. Physical, best when he’s downhill, and an impact tackler.

The Bad: Struggles with his angles and playing under control, as Mitchell struggled with early in his career. Small school concerns, obviously. Don’t have great insight on his coverage abilities. Must be a more consistent tackler, finish plays.

The Good: Played tough against equally tough competition. Shined vs Alabama. Physical, reliable open field tackler. Breaks down in the open field and gets himself under control, explode through the tackle. Capable of tracking and high pointing the ball in coverage. Shows a fluid turn. Technically sound in coverage Fills alley against the run.

The Bad: Straight line speed is marginal, even when he has the angle. That alone could take him off a lot of team’s boards.