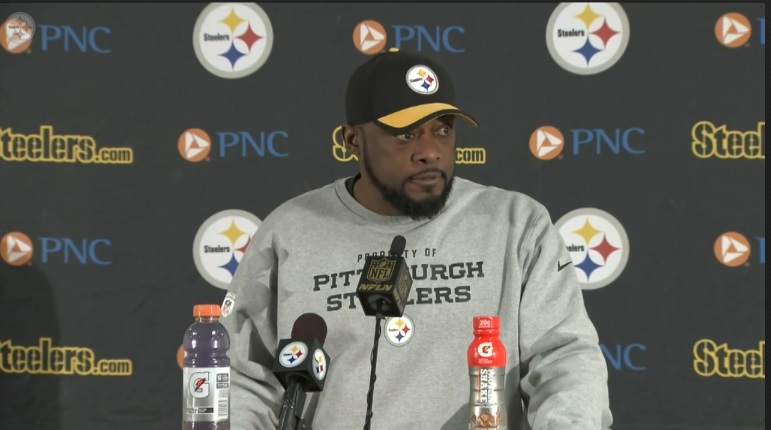 Well, this could be the last time I can write an article that will make everyone automatically hate me. So I might as well go out on top.

I know you’re mad. Upset at the season ending the way it did. They’re always tough, no matter the particulars of the result. And yes, if we had a crystal ball, maybe they’re decisions you’d like to see play out differently. I’m not trying to belittle, because there’s always an argument to be made. But Mike Tomlin’s decision against kicking a field goal, in both instances, were at worst, understandable.

Half of you have now scrolled to the comments section to yell. For those that have stuck around, hear me out.

The first came when Tomlin decided to go for it on 4th and 1 on the Denver Broncos’ 32, using playaction that ultimately resulted in an end zone incompletion to Markus Wheaton.

A 49 yard field goal in itself is far from impossible but certainly no chip shot. That’s before you factor in the wind, a major influence in the decision. Here’s a great quote from Broncos’ kicker Brandon McManus per beat writer Troy Renck.

McManus said it was worst wind he's kicked in in his life. "Nothing in pregame then 30 mph. Was tough"

You can look at the flags positioned above the goalposts, you can look at your weather app, it’s all largely irrelevant. Danny Smith has repeatedly talked about determining the wind direction from the field using pre-wrap tape he holds up into the air. That’s his guide, even telling Bob Labriola during one of their weekly sitdowns that the flags on the post “lie like hell.”

He has the unique perspective that none of us do and you have to trust that factored into making a rational, educated decision. It’s a 4th and 1. Not a 4th and 11. You might hate the idea of throwing deep but that wasn’t the intention from the sideline. Jesse James was Ben Roethlisberger’s first read in the flat, well covered by Denver. And though the pressure induced the throw, Ben missed an open Heath Miller coming across the formation to him for what would’ve been a first down. 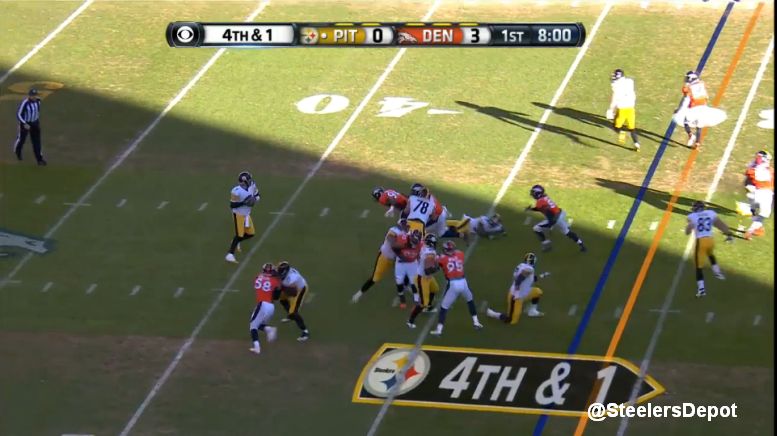 A good play by the defense, a twinge of regret from Ben, neither on Tomlin. It’s not a surprise to see him make that decision; in a vacuum, Tomlin will prefer the aggressive approach. That shouldn’t come as a shock to a soul who has been watching this team all year.

The other, though admittedly unknown factor in all of this was the status of Jordan Berry. He was reportedly checked out by the training staff after missing a tackle on his first punt, a 42 yard return by Omar Bolden. An injury that wasn’t serious enough to prevent him from playing, of course, but his status may have still been questionable by the time it came for Tomlin to make that call just five game minutes later.

If there wasn’t confidence he would be able to go out there and hold for the kick, it makes the decision to go for it a no-brainer. Trotting out Landry Jones as the backup holder, or whoever it would’ve been, is incredibly more risky than the odds of failing to convert. The repetition, rhythm, and timing of the kick can’t be overlooked, especially in less than ideal weather conditions.

The other decision came in the early stages of the 4th quarter. The Steelers clutching to a 13-12 lead. After driving to as close as the Broncos’ 24, a sack and Marcus Gilbert facemask – a crucial play to the game – saw the Steelers ultimately situated on the Broncos’ 34. A 51 yarder into the wind. Miss it and you give the Broncos’ fantastic field position, needing just a field goal of their own to take the lead. Again, Tomlin decided to punt. Berry winds up booting it five yards into the end zone for a touchback and net yardage of 19.

In hindsight, it was a negative outcome. So what was the compelling reason to go for it? Berry had been terrific at “pin deep” punts this year, and we covered how he graded out as the best in the NFL with just one touchback on 28 opportunities. An awful time to record your second  but a decision that’s hard to find fault Tomlin. Pin the Broncos’ offense deep in their own end, one that had only a lone drive of more than 40 yards all game, and trust your defense to make a play.

On the other side, McManus did make a 51 yarder but it came ever-so close of hooking right, so much so one ref had to look at the other for confirmation. 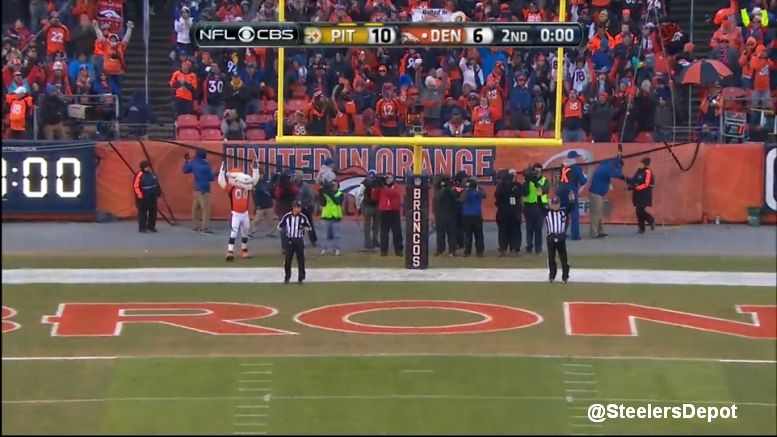 And that decision came in a low-risk situation. End of the half, down four. If he misses it, the Steelers don’t get the ball back. No risk. Just reward.

These calls are not black and white, not indefensible. This isn’t to carry Tomlin’s water, but to present a well-reasoned argument in a time where there’s so many venting. Some are going to ignore this, hold firm in their opinion. And that’s ok. I’m not expecting us to hold hands and be happy to have just gotten that far, though once time has passed, the season will be remembered as an improbable run. The Steelers lost. You should be upset. But the reasons should go a lot farther than these two calls.

I would’ve done the same thing.