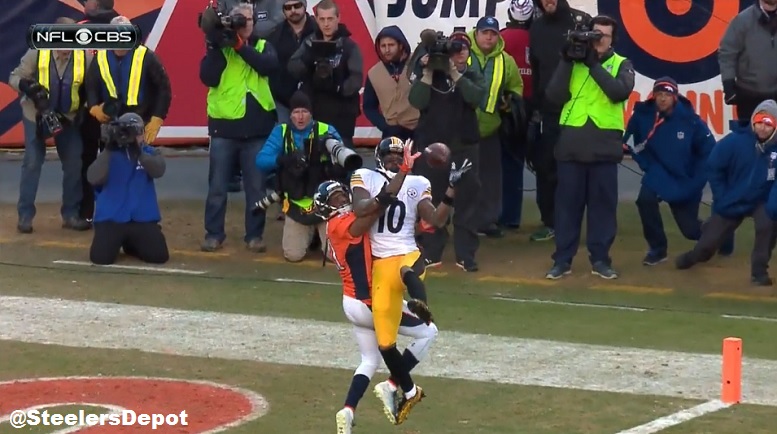 So, how did Pittsburgh Steelers quarterback Ben Roethlisberger play Sunday with an injured shoulder in the team’s divisional playoff game against the Denver Broncos? Pretty damn good.

While Roethlisberger failed to throw a touchdown pass Sunday against the Broncos, he did complete 24 of his 37 pass attempts in the game for 339 yards. Additionally, Roethlisberger should’ve had a few more completions in Denver had his offensive teammates made a few plays.

Let’s have a look at Roethlisberger’s incompletions in Denver. 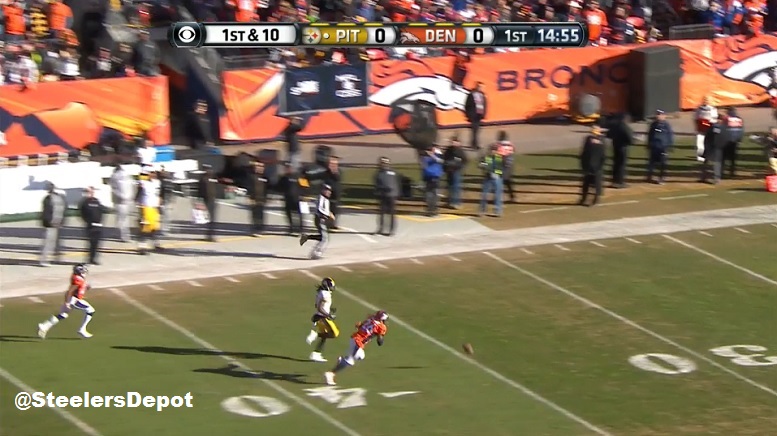 This was Roethlisberger’s first throw of the game and it was a deep pass to wide receiver Markus Wheaton. 53 yards at that. While the throw certainly wasn’t on target, I liked the fact that showcased his injured shoulder on the first play of the game in order to show that his arm needed to be respected. 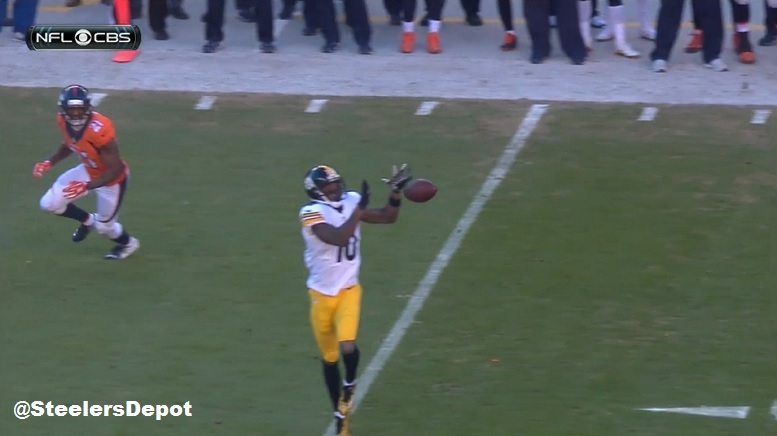 This 2nd and 9 throw in the first quarter by Roethlisberger was most definitely on target as it wide receiver Martavis Bryant right in the hands. it would’ve easily resulted in a first down had not been dropped. 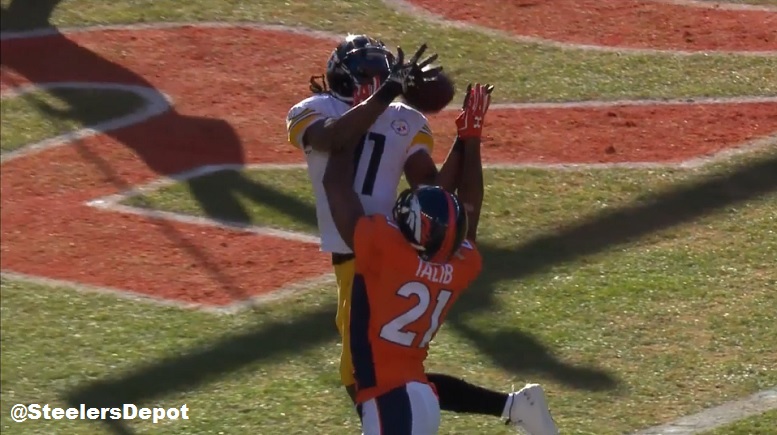 Two plays after the drop by Bryant, Roethlisberger again went deep to Wheaton on 4th and 1 after first seeing that tight Jesse James was covered in the left flat. This deep pass hit Wheaton right in the chest and while Broncos cornerback Aqib Talib was contesting the catch, it’s a pass that should’ve been caught for a touchdown. 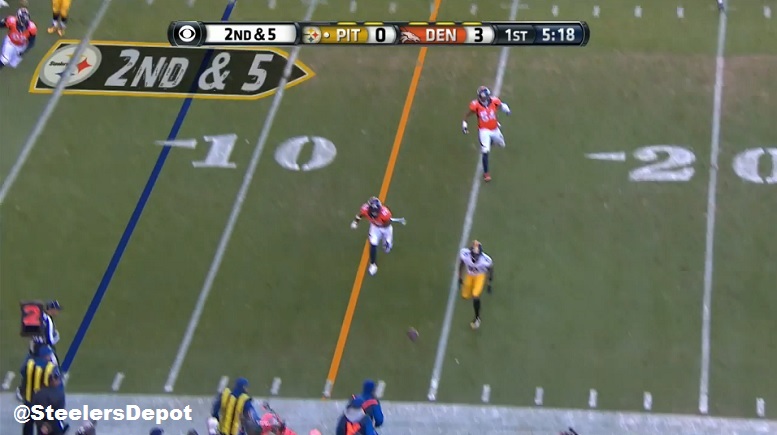 While the still shot of this throw shows the pass being off the mark to the right side, I’m pretty sure Roethlisberger expected Bryant to break to the sideline and especially judging by his reaction after the play was over. 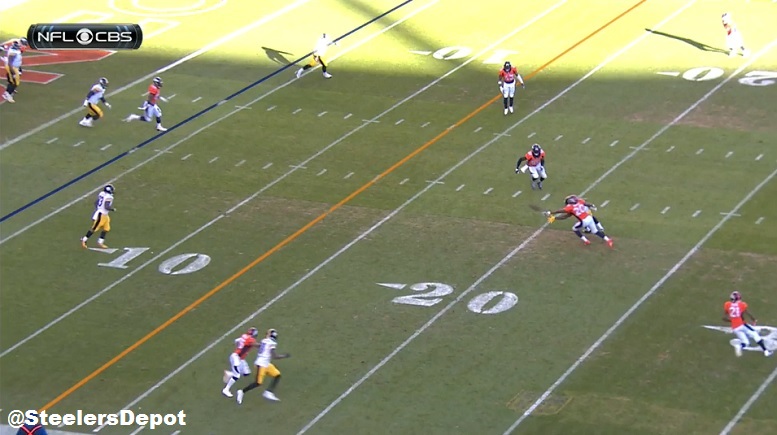 While this incompletion was behind wide receiver Sammie Coates, Roethlisberger’s reaction after the play shows him gesturing to the rookie that he shouldn’t have rounded off his route at the top of hit. Two mistakes in a row by the Steelers young wide receivers? I think so and it resulted in the Steelers having to punt from deep in their own end zone. 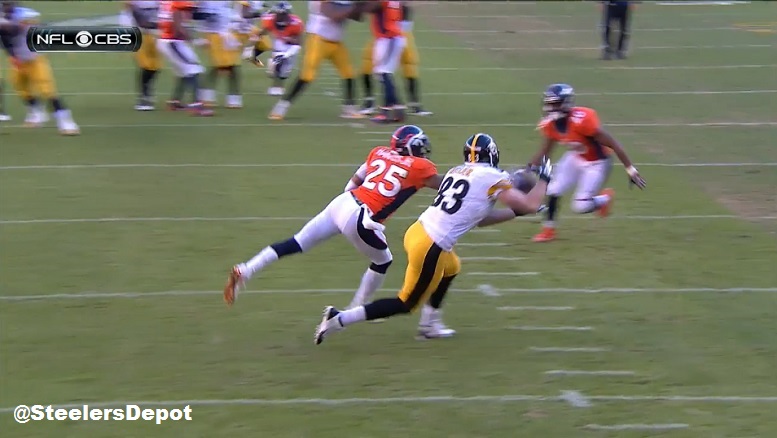 This 3rd down throw to tight end Heath Miller would’ve moved the chains had he held on to it. Another drop for the Steelers, the third of the game. 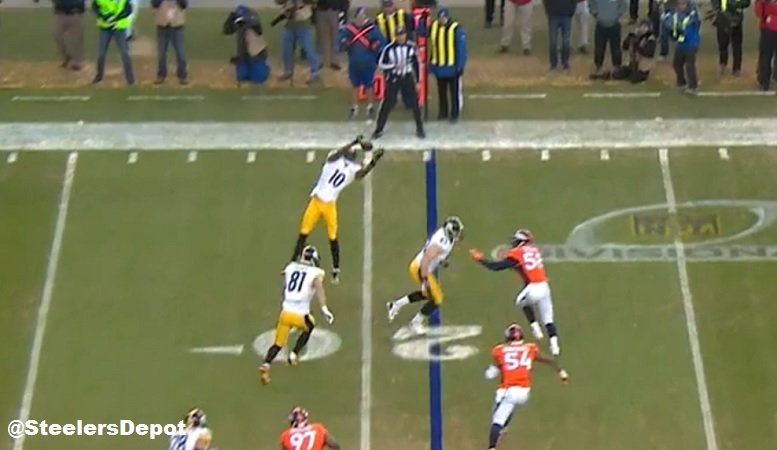 This was Roethlisberger’s first throw of the second half and it was high and outside to Bryant on a screen. 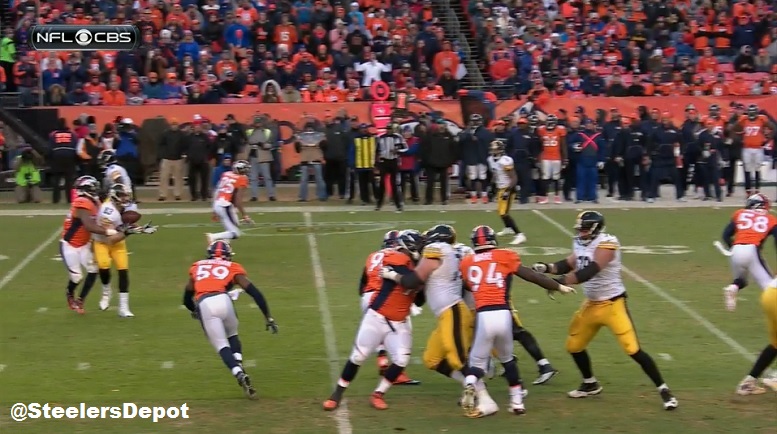 Two plays later, Roethlisberger’s short throw to Miller over the middle bounced right off the tight end’s chest and if you are scoring at home, it was the fourth drop of the game and the second by Miller. 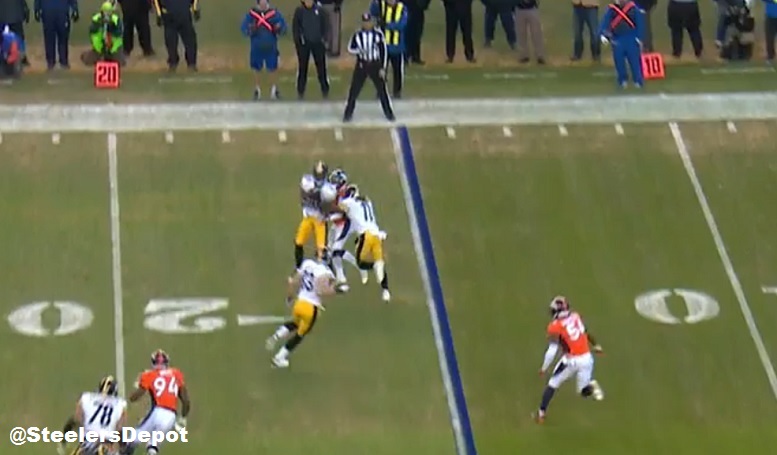 Two plays after Miller’s drop, Roethlisberger again tries to hit Bryant on a quick screen pass to the left side, however, Broncos cornerback Chris Harris Jr. is there to contest it after Wheaton fails to block him. It still looks like Bryant had a chance to catch the football just the same.

I’m sure you all remember this 3rd down play. Roethlisberger attempted to hit Bryant in the right front corner of the end zone and Talib got away with pass interference. 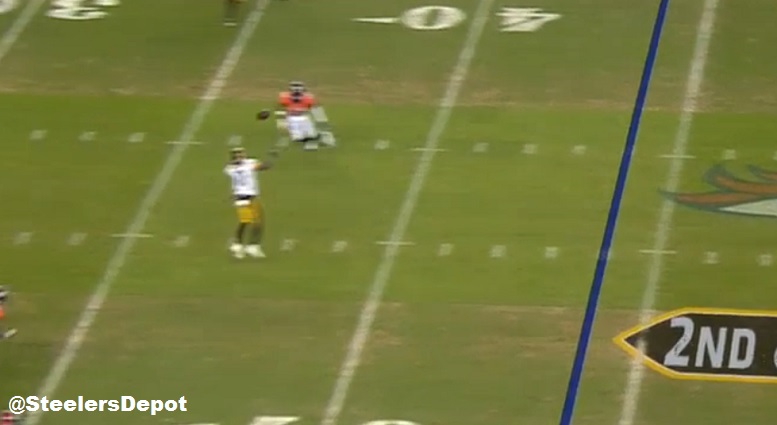 While the pass was behind Wheaton, Roethlisberger acted like he wanted his receiver to sit down in the middle of the field immediately after the play was over. 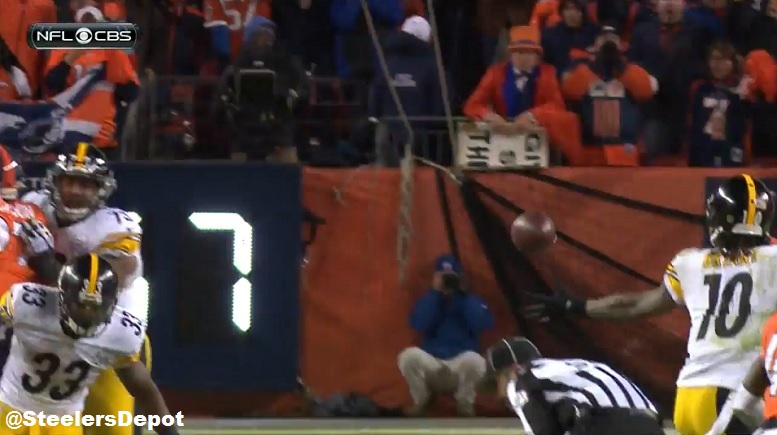 With two minutes left to go in the game, Roethlisberger threw behind Bryant on 3rd and 5. In defense of Roethlisberger, he flinched just has he was delivering the football due to Broncos outside linebacker DeMarcus Ware hitting him on the back of his helmet with his hand. I thought that was illegal.

So, was Roethlisberger perfect in Denver on Sunday? Absolutely not, but neither were his wide receivers and tight end. Four of the quarterback’s incompletions can likely be scored as drops with two more than likely being bad routes by his young wide receivers. One other should’ve resulted in a pass interference call. Five bad throws out of 37 total attempts? Yeah, Roethlisberger played a great game.