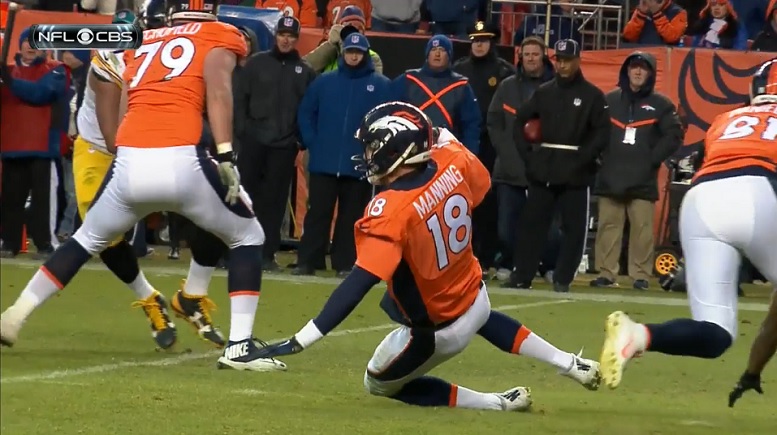 On Friday, Dean Blandino, the league’s Vice President of Officiating, released his latest officiating video from the Divisional Round of the playoffs and as expected, he covered the fourth quarter play in which it looked like Denver Broncos quarterback Peyton Manning gave himself up to avoid being sacked by Pittsburgh Steelers safety Will Allen.

Here’s what Blandino had to say about the play in question.

“Now let’s talk about the rule. A player gives himself up by going to the ground and making no immediate attempt to advance the football. That’s the rule. You’ll see that when a runner slides feet-first. Typically, that’s a quarterback who slides feet-first. You’re going to slide feet-first when contact is imminent. You’ll see here, the defenders are being blocked. There really is no imminent threat to the quarterback and we rule that he was attempting to avoid the rush. And you can see here, he’s clearly stepping up to avoid that contact by No. 20. As soon as he goes to the ground he realizes he wasn’t touched. He makes the immediate attempt to get back up and then throws a pass. That’s the rule. If he had stayed on the ground for another count, not making that immediate attempt to get back up, then we should come in and kill it and rule that the player gave himself up.”

While I understand the rule, I’m still convinced that Manning was giving himself up on the play based on his history. Had this been Seattle Seahawks quarterback Russell Wilson who had done this, I would be more at peace with the outcome of the play.

Regardless, the Steelers defensive players need to learn from this play moving forward as several of them stopped playing after Manning hit the ground even though no whistle had been blown. Steelers cornerback William Gay was the main culprit as he was covering the eventual pass catcher, Broncos wide receiver Emmanuel Sanders, on the play in question.

While it was only a 1st and 10 play, the Broncos would’ve faced a 2nd and 16 had Manning been ruled as giving himself up. At worst, had Gay stuck with Sanders, Manning may have thrown the football away and then faced a 2nd and 10 at the Broncos 20-yard-line. Instead, the Broncos gained 34 yards and while that drive eventually stalled, Denver was able to flip the field as a result of the explosive play.