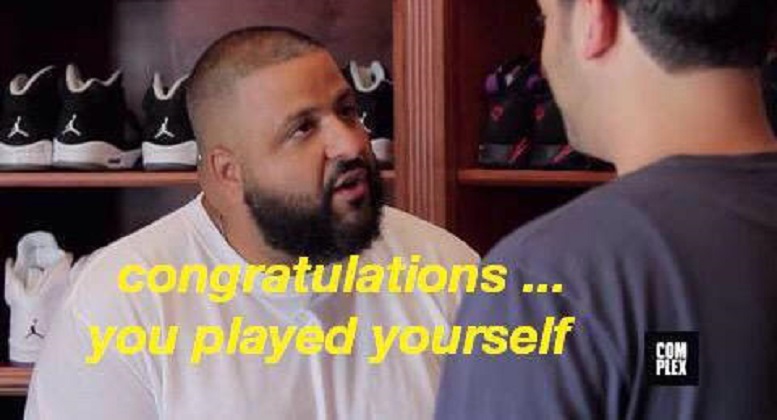 How did Pittsburgh Steelers wide receiver Antonio Brown respond to the Friday apology issued to him from Cincinnati Bengals cornerback Adam Jones? While we are not entirely sure, the Instagram post from Brown below is time marked not long after Jones’ issued his video apology on Instagram.

The meme shows a picture of DJ Khaled and includes his saying, “congratulations … you played yourself.”

Jones apologized to Brown Friday afternoon after the wide receiver was ruled out for Sunday’s playoff game against the Denver Broncos due to a concussion that he suffered last Saturday night. He promised he would do just that in an interview with New York Jets wide receiver Brandon Marshall during the latest episode of “Inside the NFL.”

During that interview, Jones still insisted that Brown was faking being injured after being hit in the head by Bengals linebacker Vontaze Burfict late in the game and he virtually guaranteed that the Steelers wide receiver would be cleared to play Sunday against the Broncos.

Immediately after the game between the Steelers and Bengals was over, Jones took to Instagram to say that Brown “flopped” after being hit by Burfict. On Monday, the Bengals cornerback said in an interview on the Dan Patrick Show that Brown “deserved a Grammy” for his Saturday night performance,

Jones wound up costing the Bengals the game against the Steelers as he was penalized for talking a swing at Steelers linebackers coach Joey Porter as Brown was leaving the field Saturday night with the help of the team’s medical staff.

On Friday, it was announced by the league that Jones had been fined for making contact with an official during the aforementioned incident.