While we’re still waiting on the All-22 to come out to really dive into last night’s loss, we’ll shift our attention to some softer stories.

On Facebook a short time ago, Antonio Brown thanked his teammates, coaches, and of course, the fans. 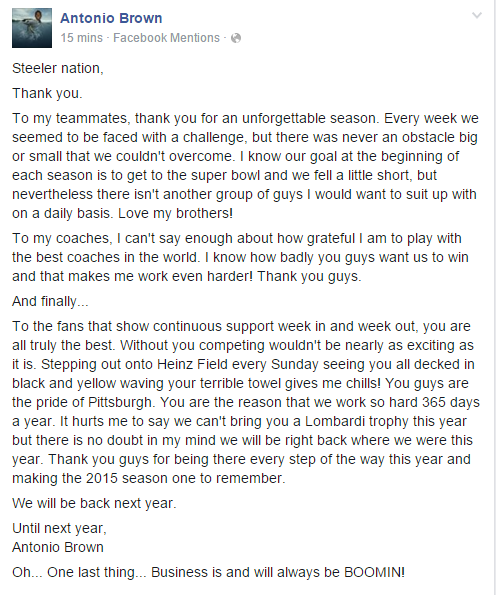 It has to be an incredibly difficult week for Brown. He missed a whole week of practice and forced to stay at home and watch his team lose. But Brown has always handled himself in a professional, dignified manner, and this thank you just continues to affirm that message.

He’s coming off another spectacular season with 136 catches for 1834 yards and ten touchdowns. The receptions and yards are personal and franchise records. Here’s his stat line over the last three seasons: 375 receptions, 5031 yards, and 31 touchdowns. That’s more catches than Lynn Swann had in his entire career and Brown is just over 400 yards away from surpassing him in yards. An incredible span for the best receiver in the game.

Brown is under contract for the next two seasons but will be owed just $6.25 million in base salary in 2016 and $8.71 in 2017. The offseason is sure to kick back up the talks of giving Brown an extension, similar to the five year, $75 million Julio Jones received in August. The front office has been adamant about not giving non-quarterbacks new deals until they are entering their last season but with a talent like Brown, one fans won’t see for a long time, he is worth making an exception.