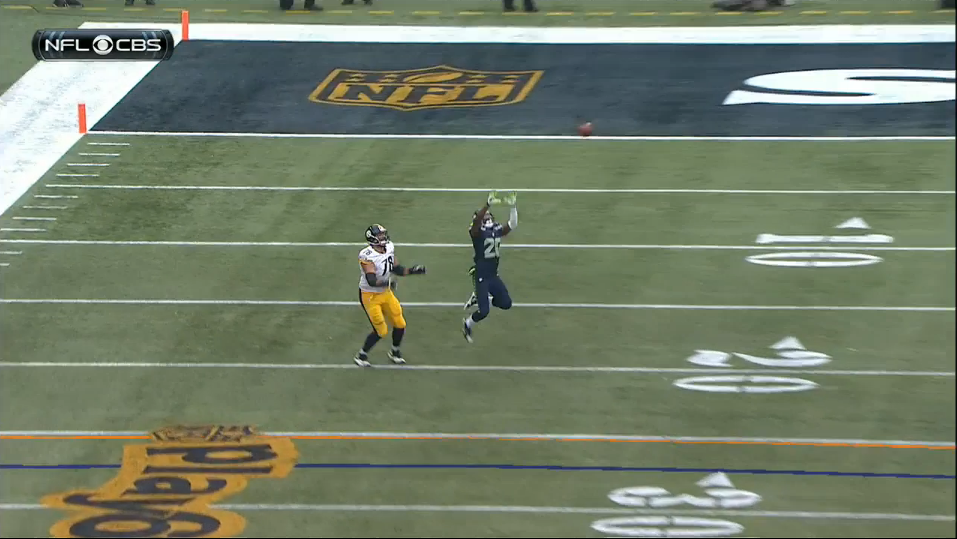 Landry Jones trotted out onto the field.

No, not in relief on Ben Roethlisberger, something that would happen later in Sunday’s game in an all-too familiar sight.

It was the beginning on the second quarter. 4th down in an assumed field goal situation. And so when Jones, someone not part of the usual field goal unit came out, it was easy for us to realize this wasn’t a normal field goal.

The Seahawks had little issue reacting and adjusting to Jones and the subsequent unique formation of him being the deep quarterback with the likes of Stephon Tuitt split out wide. Jeremy Lane picked off the pass intended for Alejandro VIllanueva, pulling across the field, returning the ball deep into Steelers’ territory.

Love or hate the call – ok, you hate it – is not the dead horse I’m interested in beating here. To the broader point, why are quarterbacks acting as holders going the way of dinosaurs? Extinct.

To bring it back to the Steelers specifically, it’s hard to blame them for inserting Jones on the fake. Jordan Berry acts the regular holder, and he’s the last guy you want throwing a football. Remember, Berry is the player who told coaches he preferred to punt-pass the football than throw it in college. There would very likely be a modern day version of Garo Yepremian if Berry was ever asked to chuck a football.

So why not a quarterback? A regular holder but always has that influence of the possibility of attempting a fake. Seattle did adjust to the Steelers’ zany, Red Bull infused Madden formation, but they had the benefit of an alert to something unusual the moment #3 took his place on the field.

If you’re looking for the element of surprise, you’ve missed the mark. You might as well tell the PA announcer directly to get ready for a fake.

“We knew we had a one-on-one situation. That’s why we threw it with a quarterback, not a punter. Sometimes you throw it with a punter, and you say, why would you put the ball in his hands? That’s why we substituted Landry,” Danny Smith told Bob Labriola in yesterday’s Coordinator’s Corner.

The normally candid special teams’ coordinator was clearly not interested in talking very much about the fake, saying he had moved past it, and the tone in his voice confirmed his feelings.

But the point still stands. Isn’t every fake better when it comes from a quarterback than a punter? The obvious answer is yes. So why do the majority of teams use their punter?

It’s not as if there are any tangible continuity benefits. Punters can be shuffled out as often as quarterbacks. The Steelers have had a revolving door since Daniel Sepulevda left. Maybe it comes down to reps, quarterbacks are busy during practice and don’t have as much time, but there are often dedicated special team periods where everyone not involved in the play just stands near the water tank. In training camp, at least, there is nothing else going on when the team practices field goals.

It’s a minor quibble, and wouldn’t even be a topic if not for Sunday’s controversial call, but it’s a thought I’ve truly always had. There seems to be little downside and considerable upside. The defense has to always worry about the possibility of a fake, you’re more comfortable running it, and you don’t have to tip your hand when you do want to run it.

Punters are people, too.

But they shouldn’t be holders.