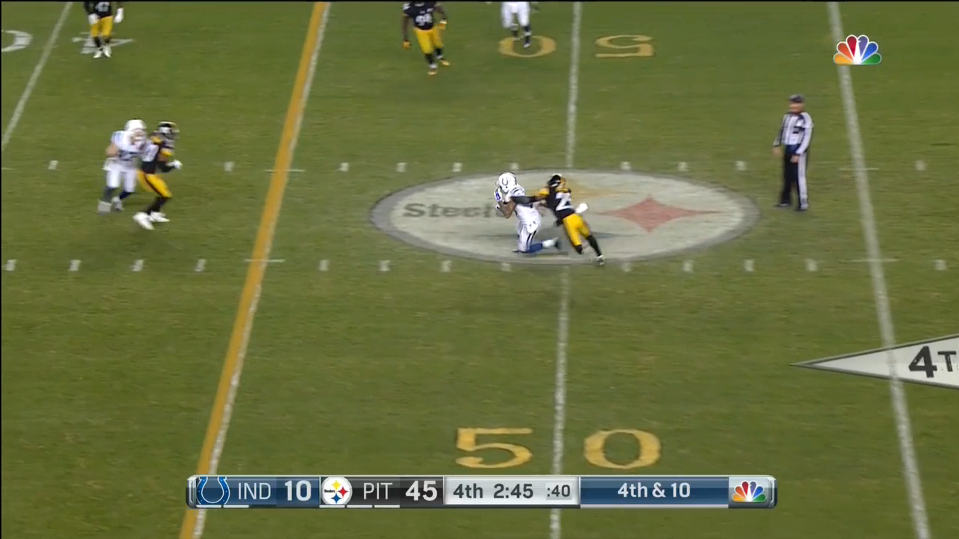 It was a definite improvement in the tackling department by the Pittsburgh Steelers defense after a pitiful effort against Seattle last week, with only three first half whiffs versus the Indianapolis Colts. The Pittsburgh defense did finish with 12 in the game, and while most came after the game was decided, Im sure the coaches will want to take a long look at the tape. Most were not egregious misses, and some were actually tough tackles that slowed the ball carrier down enough for others to arrive. I’ll highlight two ugly plays, but rest assured the damage from missed tackles was minimal outside of those two plays.

A season-low 32 snaps for Blake helped eliminate much of the Steelers tackling woes until late in the game, while the defensive line laid a surprising egg. Tuitt’s two misses weren’t bad however, as he pressured Matt Hasselbeck into a 4th down YOLO ball to thwart one Indy drive, despite missing the tackle.

The Steelers worst tackling of the evening came late in the third quarter, when Frank Gore slipped away from a trio of defenders for a 34-yard gain.

Out of control efforts by Blake and Mitchell, while Jones just fails to wrap up. Incredible motor by Cam Heyward to his Hasselbeck in the pocket on the pass, then chase this play all the way down from behind in a 28-10 game. Maybe the only defensive lineman in the league that would do that.

The other bad miss came courtesy of Boykin over pursuing a bit, and then Cockrell attempting to make another arm tackle from a tough angle, similar to what he did last week on several occasions.

Five misses were packed into those two plays, allowing a combined 67 of the Colts 186 total yards on the evening. Another example that when Pittsburgh tackles well defensively, they are capable of being a much better unit than the common perception surrounding them would suggest.