Bringing back our defensive sack review series after a bye week hiatus, we’ll fire up the tape today and look at the Pittsburgh Steelers two sacks of Russell Wilson on Sunday.

1. Five man-pressure vs. five man protection, with Ryan Shazier lined up off-screen as the slot defender rolled up against Jermaine Kearse. At the snap outside linebacker Bud Dupree drops into coverage, and the Steelers overload blitz the left side of Seattle’s offensive line.

Lot happening here, so I’ll go one player at a time. You can see Shazier coming like a bat out of hell on the left side of your screen, while Jarvis Jones does a great job showing off some bend and ripping underneath Russell Okung’s punch. Cam Heyward crashes inside to the center to allow Lawrence Timmons to loop through the A-gap on the stunt.

You can see Okung doubling over as he fails to cut off the edge rush of Jones, you can see left guard Justin Britt late to recognize Timmons’ blitz, and you can see center Frank Lewis getting knocked backwards by Heyward’s power after missing with his punch. Not the best look for the Seattle offensive line.

Heyward just dominates Lewis, leveraging the center’s punch above his head as you can see in the above image. Britt gets a slight shove in on Timmons, but only enough to slow the linebacker a tad as he bursts into the pocket behind Heyward. Jones continues to rip the edge brilliantly against Okung.

Heyward gets home first, which is straight up ridiculous considering his role was primarily to open up a gap for Timmons and/or Shazier to exploit. The inside linebacker duo isn’t far behind Heyward in getting to Wilson, while Jones finishes off Okung and gets in on the action as well

This sack certainly showed the poor pass protection tendencies of Seattle, but you have to be impressed with how Pittsburgh is getting to the quarterback. Great scheme to test Britt and Lewis’ limited amount of time together as linemates, and outstanding individual efforts to beat blocks and get to Wilson quickly.  If just one of these rushers wins, Wilson’s escape becomes more probable, but by each player defeating a block and combining for the pressure, the result is a meet-you-at-the-quarterback sack for Pittsburgh.

2. The next sack is pretty boring, but we’ll discuss it anyway. Four-man rush against a five-man protection. James Harrison rips the edge on Okung, flushing Wilson from the pocket.

Check out Harrison’s frame in this image. See how his shoulder are still square to the end zone, even as he is moving toward a target (Wilson) that is diagonal to him? Textbook form, refusing to give Okung a large target to land his punch by keeping his chest facing upfield. As a result, Okung slides down Harrison’s frame and gets doubled over again, forcing the left tackle to hold the veteran edge rusher in order to stop him. 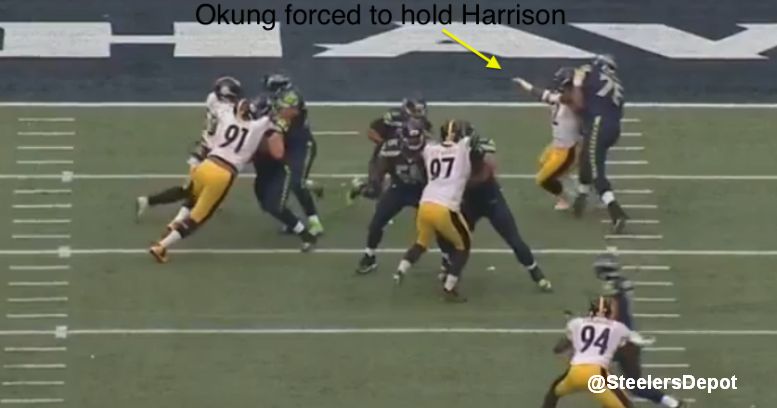 You can clearly see Okung with a textbook hold on Harrison directly in front of the official, the only thing that keeps the Steelers defender from getting home and finishing this sack. However no flag is thrown, and Wilson escapes the pocket to eventually slide to the ground a yard shy of the line of scrimmage as William Gay runs up from his spot in coverage to bump him down.

Big missed call by the officials after a great rush by Harrison, but Wilson should probably throw this ball away rather than take a yard loss. Gay gets credit for the sack, his first of the season and Pittsburgh’s 30th as a team.

There were two other sacks that Wilson craftily evaded, one by Harrison and the other by Dupree. Pittsburgh got pressure on the quarterback for most of the day, but Wilson was excellent under fire, either escaping or releasing the ball quickly. The pass rush really needed the secondary and the coverage schemes to have their back more often than they did on Sunday, as Wilson is a hard quarterback to rattle once he gets comfortable.