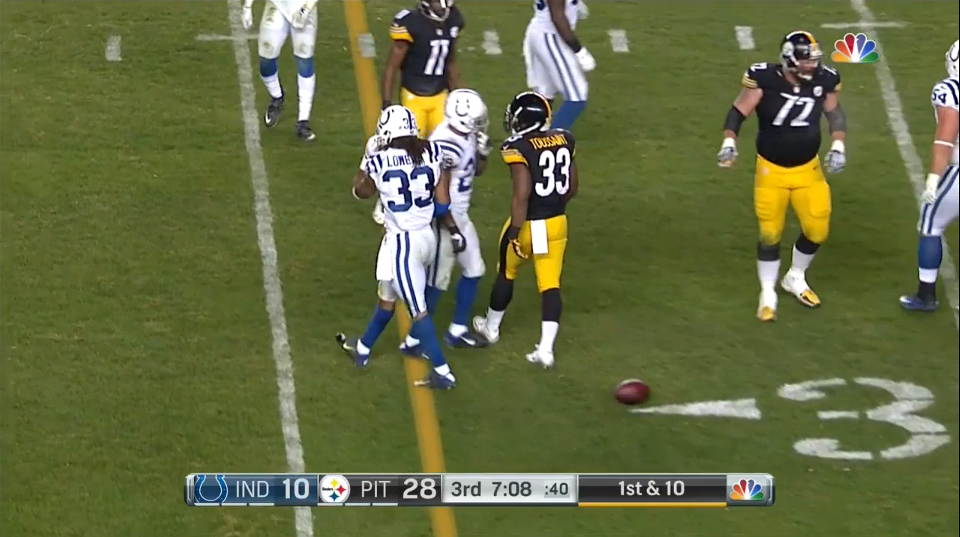 One surprise on the Pittsburgh Steelers’ inactive list Sunday night was the inclusion of Jordan Todman. It was difficult to tell if he was a late scratch, perhaps nicked up during Saturday’s walkthrough, or a healthy scratch who had simply been usurped on the depth chart by Fitzgerald Toussaint.

Mike Tomlin confirmed the latter at his Tuesday press conference, framing it as a performance decision. Tomlin praised Toussaint for taking the steps to earn the promotion.

“He’s earned the opportunity he’s gotten. He’s gotten out attention with hard work and detail. That was one of the reasons why we moved him from practice squad to active roster and active roster to a gameday hat. It’s not about what Jordan has done or hadn’t done, really, it’s about the confidence we’re gaining in what Fitz is capable of doing.”

Toussaint got some work in Sunday’s blowout, carrying four times for 12 yards. Two of those came on the final drive, mop up duty in a blowout. He saw two others mid-way through the third quarter, where he busted off a long run of seven yards. He also served as the upback on kick returns, replacing Todman’s role there as well.

It’s reasonable to assume the understudy to DeAngelo Williams is a fluid position. With several young, or at least, new, players on the roster, and no established player sticking out, it’s a positive thing to create a week-to-week competition for that backup spot and ultimately, a hat on Sunday. It wouldn’t be surprising to see the two switch spots in a given week and may truly be one of the only undetermined roster spots heading into a given practice week.

It’s been a weird year for Steelers’ running backs. Already, technically three different players have served as the team’s #2 running back – Williams, Todman, and now Toussaint, with momentary intrigue over Isaiah Pead.  Pead lost out almost as quickly as he came with Toussaint supplanting him on the 53 man squad. Todman had run the ball four times for 22 yards while wearing several hats on special teams.