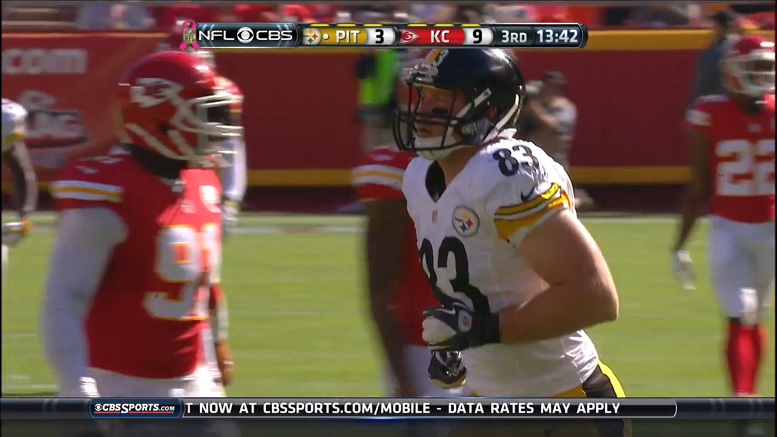 With the news out that the Denver Broncos starting strong safety T.J. Ward will miss Sunday’s game in Pittsburgh against the Steelers, the picture becomes clearer as to how the high-powered Steelers offense will have to attack the vaunted Broncos defense, which happens to be the best in the league.

Expect a heavy dose of veteran tight end Heath Miller in the middle of the field once again this week.  Last week against Cincinnati, Miller started off hot, forcing the Bengals secondary to key in on him, providing Antonio Brown, Martavis Bryant and Markus Wheaton with room to maneuver.

The same thing should happen once again, Sunday, against the Broncos who possess a tenacious pass rush and a physical, ball-hawking secondary.

Outside of Miller against the likes of linebacker Danny Trevathan and backup safety David Bruton Jr., there are plenty of key individual matchups to watch this Sunday. I’ve highlighted two to watch this week below.

Let’s start with the biggest matchup to watch in Sunday’s game.

While this matchup won’t jump of the screen/paper as the biggest one to watch, it might be the most important to the outcome of the game.

Hear me out:  it’s going to be tough sledding for Brown, Bryant and Wheaton out wide against the likes of Aqib Talib, Chris Harris Jr. and Bradley Roby. As a pass-heavy offense, Ben Roethlisberger is going to need someone to step up in a big way, allowing him to move the ball down the field against Denver.

That’s where Miller comes into the picture. Sure, Trevathan is a very good cover linebacker for Denver, but that doesn’t really matter to Miller. The 11th-year tight end is a terrific route runner who knows how to work open and show his numbers to Roethlisberger in big spots.

It also helps that Miller and Roethlisberger have established an impressive rapport that no one else seems to have with the quarterback in this Steelers offense.

Along with Trevathan, Bruton Jr. happens to be a decent coverage safety for Denver. Although he rarely sees the field when Ward is healthy, Bruton Jr. has come up big for the Broncos when pushed into action.

For those that remember, he. helped sealed the win in Week 1 against Baltimore by forcing Joe Flacco to throw an interception in the end zone as the Ravens quarterback looked for tight end Crockett Gilmore down the seam.

Bruton Jr. trailed Gilmore down the seam, forcing Flacco to loft the throw, allowing Darian Stewart to undercut the throw for the game-winning interception.

He might not scare passing attacks of the caliber of Pittsburgh as a coverage corner, but he’s very technically and schematically sound.

This matchup should scare Steelers fans.

Sure, Gilbert has become a very good starting right tackle in the league working under offensive line coach Mike Munchak, but the fourth-year tackle hasn’t had to face the caliber of a pass rusher like Von Miller this season.

Miller has recorded at least one sack in five straight games and currently sits sixth in the league with 10.0 sacks through 13 weeks. As of late Miller has come on strong and can single-handedly change the outcome of a game just by getting to the quarterback.

While Gilbert is a strong run blocker he still struggles at times with fast, athletic pass rushers built like Miller who can convert speed to power rather quickly, forcing tackles into the lap of their quarterback.

Gilbert is going to have to find the happy medium as a pass blocker between establishing a strong base against Miller in pass protection while also being lite enough on his feet to stick with Miller as he tries to bend the edge.

Fortunately for the Steelers, Gilbert is very light on his feet and has become a much more athletic tackle that suits the style of the Steelers offense as currently constructed.

Should Gilbert struggle against Miller, expect Matt Spaeth or Jesse James to serve as a help-side blocker alongside Gilbert, allowing the Steelers to try and neutralize arguably the best pure pass rusher in football, providing Roethlisberger with time to throw against a banged up Broncos secondary.

For what it’s worth, I like the Steelers’ chances in both of these matchups. If this game were last year I would not feel good about Gilbert against Miller at all, but the work that Gilbert has put in under Munchak has paid off in a big way this year as he’s developed into one of the top 5-7 right tackles in all of football.

Not bad for a guy many thought was going to flame out as another bust along the offensive line, similar to Mike Adams.