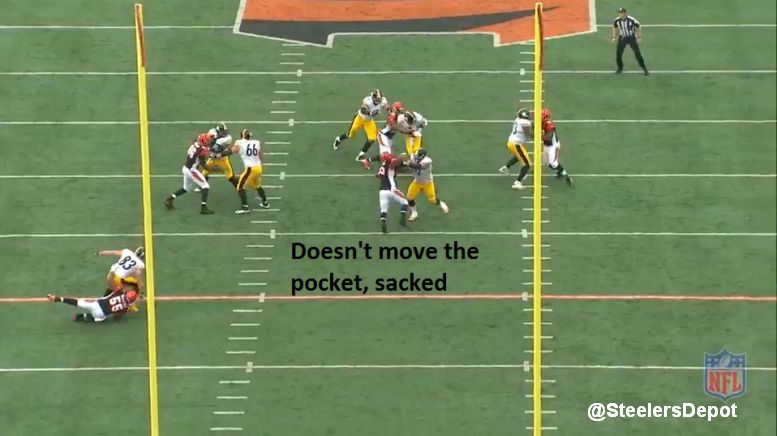 Your sack breakdown from the two given up by the Pittsburgh Steelers against the Cincinnati Bengals Sunday night.

1. 3rd and 8, 7:48 2nd. 11 personnel. Five blocking, just the offensive line, against the Bengals’ four man rush. The route is a Hank concept, a combination we’ve covered many times before. Curl/flat mirrored to each side with the TE running a five yard curl, the Hank route. Steelers dress it up a bit with Antonio Brown lined up in the backfield, releasing into the flat. 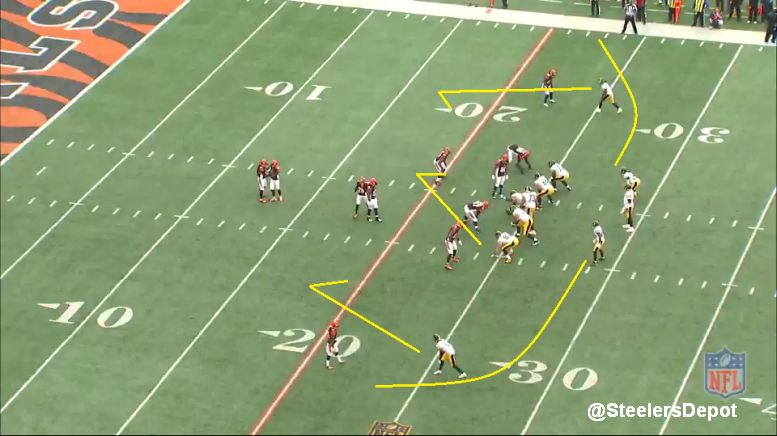 Ben Roethlisberger’s first read is the curl to the field. Get the first down, move the sticks. But the Bengals do a terrific job of disguising their coverage, with both safeties side-by-side until the snap. Then they rotate, one to the deep middle, with the other robbing anything underneath. 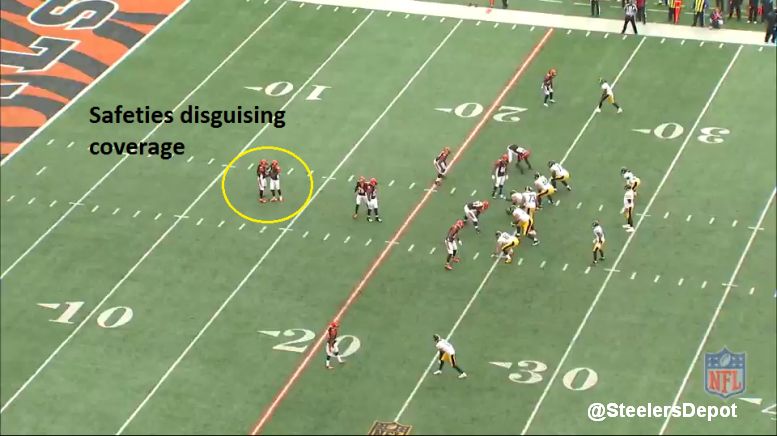 Roethlisberger has to take time to process it and the curl route never really opens up, especially with the flat defender not getting as much width as you’d ideally like. 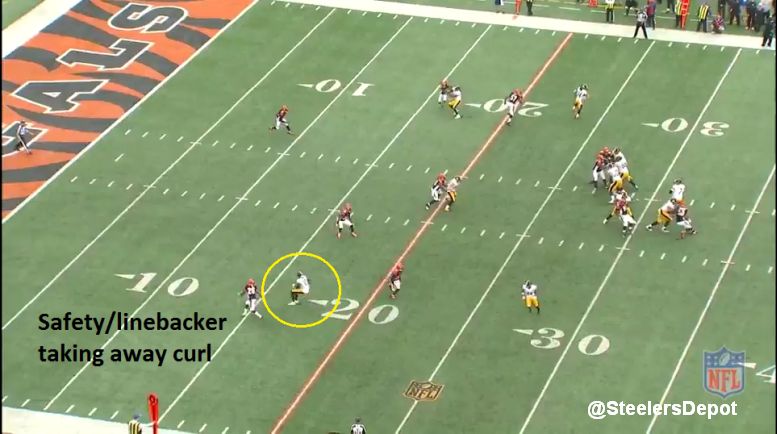 The problem is Ben has a hard time getting off his first read and doesn’t do a good job moving the pocket. He hitches up in the pocket a couple times but after 4.25 seconds, the time from snap to sack, Roethlisberger needs to escape. Does little to move the pocket and gets brought down by Michael Johnson. 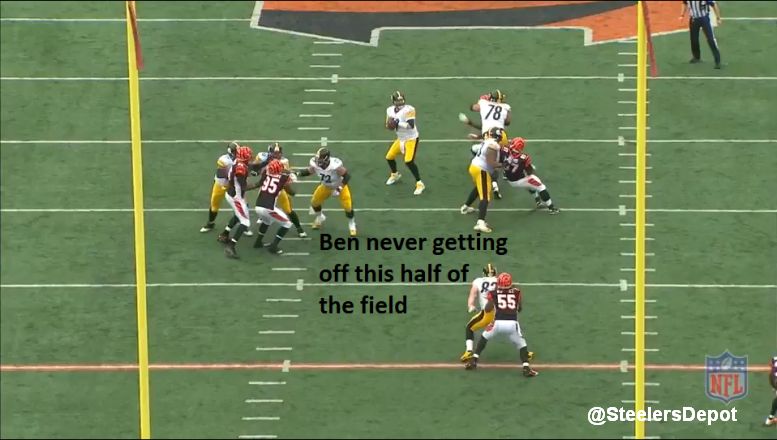 This definitely isn’t Alejandro Villanueva’s fault. Showed great athleticism to get a piece of the DT Geno Atkins and work laterally to shove Johnson way up the arc. So in no way does Villanueva get blame even if his guy “beat” him.

Bottom line: Ben needs to work off that side of the field or leave the pocket and extend the play, as he’s so famous doing.

2. 3rd and 2m 8:45 3rd. 11 personnel. Six block against a four man rush. Marcus Gilbert beaten for the sack but the issue starts with the snap. Steelers don’t snap the ball until there’s one second left on the play clock, allowing the Bengals – namely Carlos Dunlap – to get a great jump off the ball. Before Gilbert has even moved out of his stance, Dunlap has crossed the LOS. 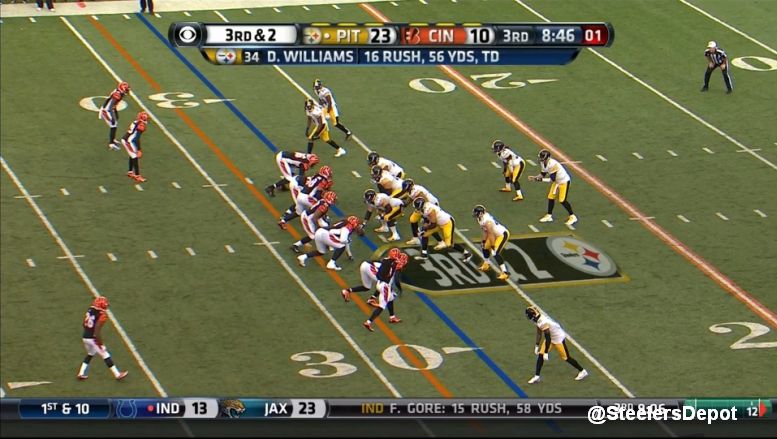 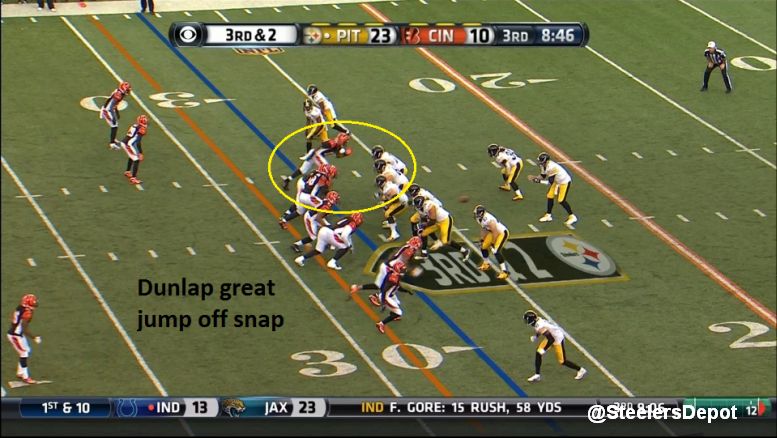 With his wider technique and Gilbert’s inability to get enough depth on his initial step, Dunlap is able to dip past and slam Roethlisberger to the ground. 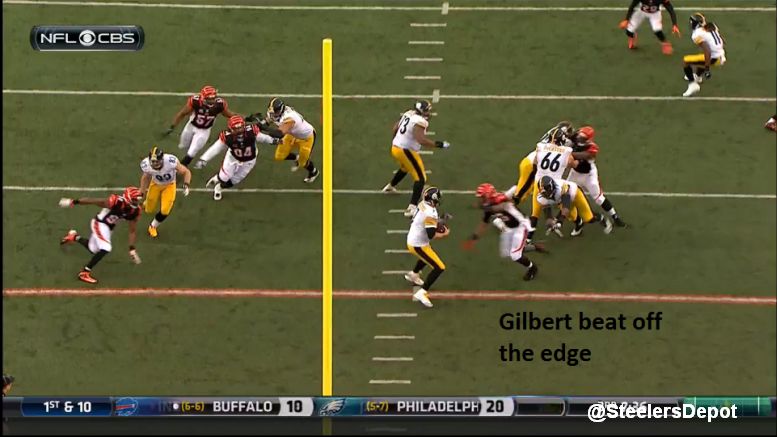 Nice design by the Bengals to press the A gaps with the linebackers, though Gilbert never had to hesitate or worry about the rush. His responsibility was always Johnson. The Steelers had six blockers to account for six rushers, meaning they were safe and didn’t need to slide and get the ball out hot.

I have to put some blame on the quarterback for not managing the huddle/clock well enough and creating the late snap. And though it was an awfully difficult spot, Gilbert did get beat pretty cleanly by his man. So half goes on him for this one.

Blame: Half on Roethlisberger, half on Gilbert