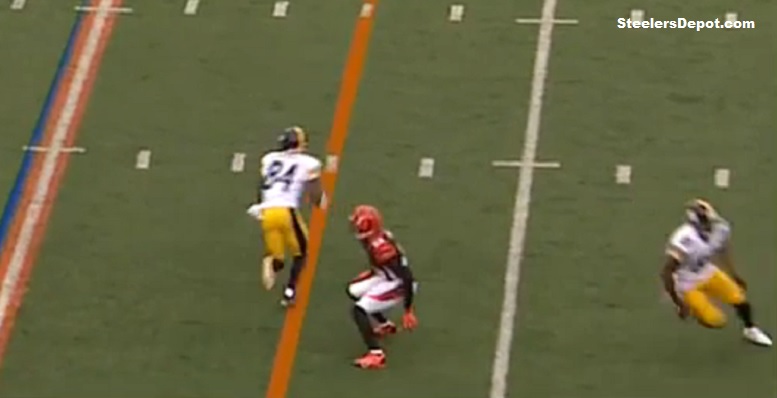 Pittsburgh Steelers wide receiver Antonio Brown caught 7 passes for 87 yards Sunday in the team’s 33-20 win over the Cincinnati Bengals and he now has 100 on the season. Brown’s first catch in that game resulted in a 19-yard gain on 3rd and 3 and featured his excellent route running.

As you can see in the animated gifs below, Brown is lined up off the line of scrimmage with Bengals cornerback Leon Hall looking like he wants to play inside leverage in order to force him up the field to safety help.

At the snap, Brown starts breaking down 3 yards into his route. At four yards, Brown has Hall flat-footed, and you can see a still of that shot above. Brown easily breaks inside on the slant with a ton of separation to boot.

Thanks to the route combinations on the other side of the Steelers offense, the middle of the field is wide open for Brown against the Bengals two-deep shell. Brown gets quite a bit of praise for the catches that he makes but not enough for his route running, in my opinion.