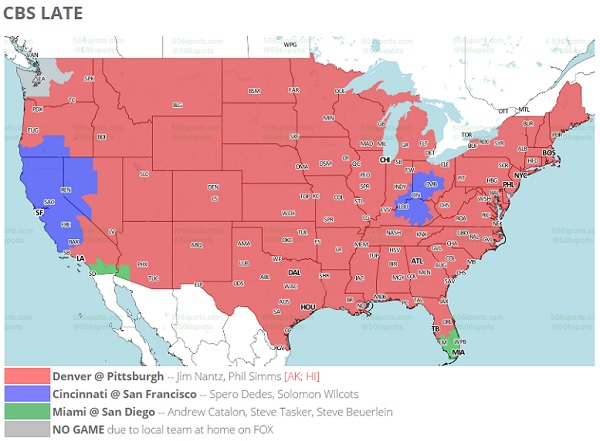 Are you looking forward to watching the Pittsburgh Steelers Sunday home game against the Denver Broncos? If so, you should be able to watch it live as CBS will feature it nationally as their late afternoon game.

As you can see in the television coverage map above that 506 Sports puts out every week, only very few areas will be forced to watch the Cincinnati Bengals play the San Francisco 49ers and the Miami Dolphins play the San Diego Chargers.

The only drawback to the game being nationally televised on CBS is that it will be called by Jim Nantz and Phil Simms.

One other note about Sunday’s game, referee Carl Cheffers and his crew will officiate the game. That’s the same crew that called the Steelers Week 1 game against the New England Patriots. The Steelers, by the way, were penalized 8 times for 88 yards in that loss.

The Steelers are 5-3 in the regular season games that Cheffers has refereed and two of those losses came against the Patriots.