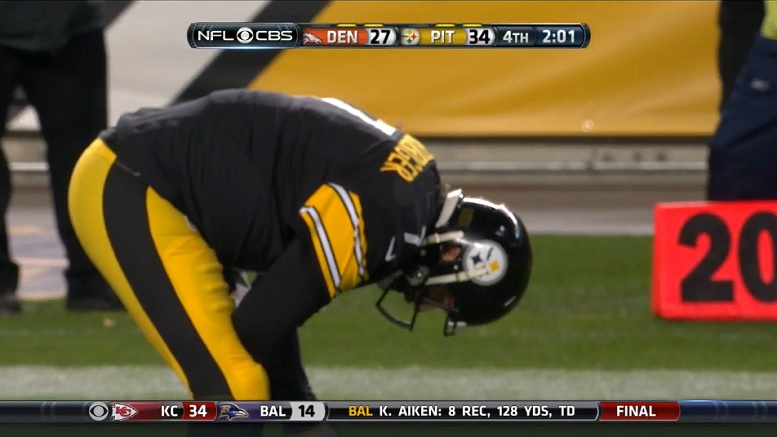 Late in Sundays win over the Denver Broncos, Pittsburgh Steelers quarterback Ben Roethlisberger threw one of the ugliest interceptions of his career with his team leading by 7 points with 2:08 remaining. Even though it was an ill-advised throw, Steelers general manager Kevin Colbert told Roethlisberger after the game that he doesn’t want the quarterback to stop trying to make plays, according to a Wednesday morning interview on 93.7 The Fan.

“I said, ‘Boy I just gotta stop trying to make so many plays.’ He [Colbert] goes, ‘No you don’t. Don’t stop. That’s what we live by and die by, and you’ve done too much, too many good things to stop. Don’t ever stop doing it.’ So, it just makes you feel good when your GM is someone that has that much faith and trust and belief in you, too.”

As much as we all probably cringed after Broncos linebacker Brandon Marshall picked off that Roethlisberger at the Steelers 41-yard-line, Colbert is right in telling his quarterback not to stop being who he is. However, Roethlisberger doesn’t need to force throws such as that just the same.

Strangely enough, 7 of Roethlisberger’s 12 interceptions this season have come in the fourth quarter. 3 of those came in the Steelers Week 8 loss to the Cincinnati Bengals, which just so happened to be his first game back from the left MCL sprain that sidelined him for 4 weeks.

More times than not, Roethlisberger attempting to make plays late in games results in positive outcomes. That ability is what has set him apart from other quarterbacks during his career. There’s no reason for him stop being who he is even though he’ll occasionally make a poor decision like he did Sunday against the Broncos. Thankfully for the Steelers their defense bailed him out.