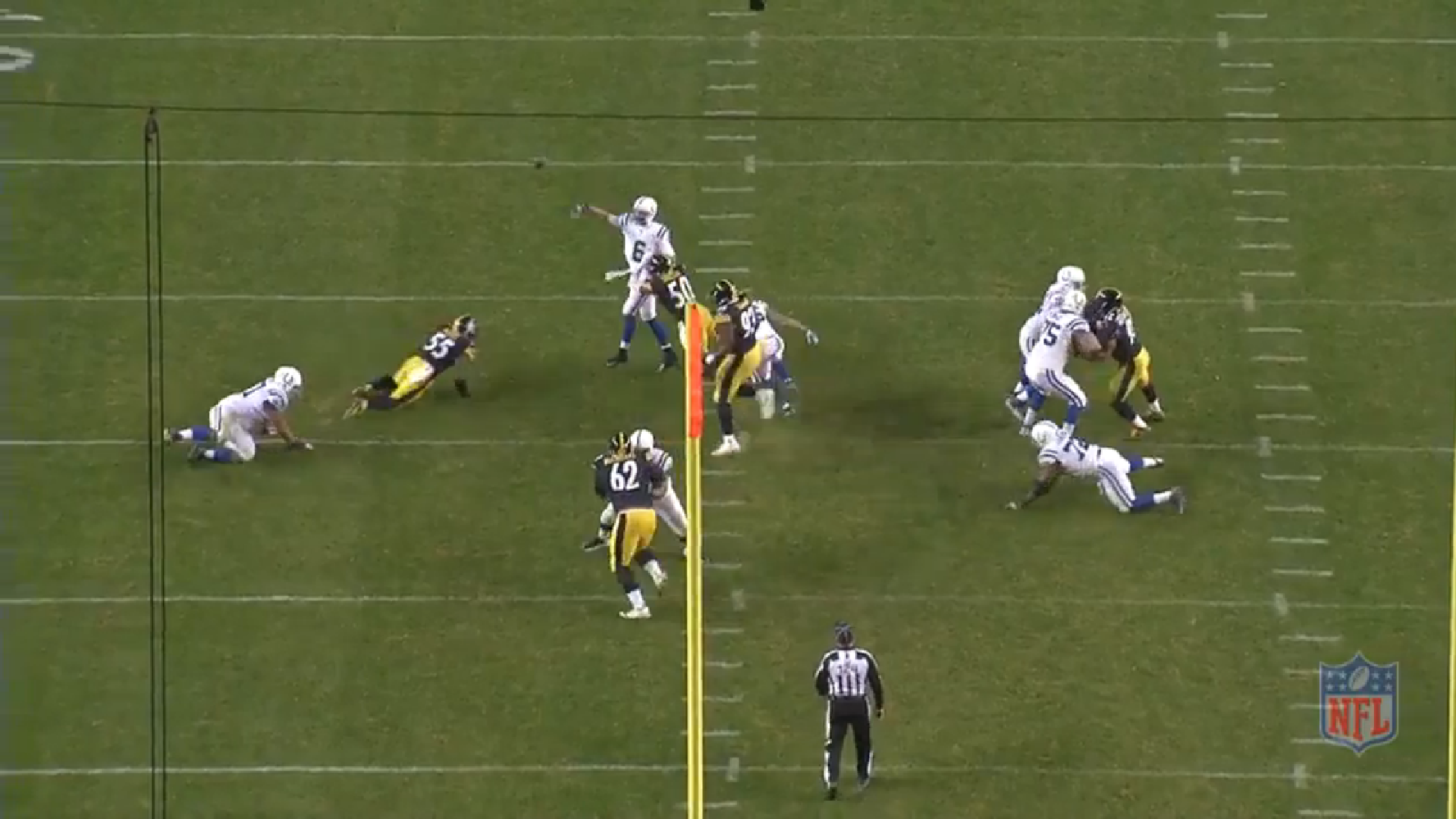 Pittsburgh Steelers second-year inside linebacker Ryan Shazier bounce back quickly from what looked like a relatively severe concussion out in Seattle the week before to start for the team on Sunday night against the Colts, playing 45 of 58 defensive snaps, so I was particularly interested to see how he played.

As you might expect, it was a bit of a mixed bag, making a couple of plays but also giving some up. Officially, he posted a stat line of six tackles, including four solo, which is tied for the second-fewest tackles in a full game this year, the lowest being four in the game against the Chiefs when he returned from his shoulder injury.

Shazier was blown out of the hole and put on his back by the center on the first play of the game, admittedly not the greatest start, but the defense held, recording an interception on third and nine two plays later.

He started the Colts’ second offensive drive little better, unfortunately, this time getting turned by the right guard and missing on the runner, though at least on this play he kept his feet, even if the run picked up nine yards.

A play later, however, he showed discipline and vision working through the wash of bodies to get to the ball as he helped wrap up the ball carrier with a group of defenders, putting him down for a loss of three yards.

The rest of the first half was fairly quiet for Shazier, which included an extended drive on which he was subbed out. He spent most of his time dropping into coverage without being tested, and so there was little to report.

But it didn’t take long into the second half before he would get on the stat sheet, actually doing well to stay clean from the moving left tackle and eluding the guard engaged with the defensive end in order to get an arm on Frank Gore’s ankle, tripping him up after a gain of three yards.

Midway through the quarter, however, he was responsible for a key missed tackle that helped lead to a 34-yard gain by Gore on a drive that admittedly ended on a turnover on downs. Shazier dropped into coverage and broke on the back after receiving the check down, but after getting by the pulling lineman, could not make a clean attempt on Gore, which would have held him for no gain.

Later on the drive, on third and eight, he set up off the edge as though to rush, but dropped into a hook zone. After the middle of the field opened up, Shazier came from a distance to get in on the tackle after a seven-yard gain, forcing the fourth down that ended the drive a play later.

Past the midway point of the fourth quarter, Shazier stayed with the tight end running a corner route as the ball went to the back who was further upfield. The linebacker was able to stay clean of the tight end, helping to make the tackle.

Toward the end, on a second-and-17 play, he may have had his best play of the night rushing through the B gap, manhandling the back in pass protection and getting a hit on the quarterback to force him to chuck the ball away.

He certainly did not look up to full capacity, especially early on in the game, but Shazier did manage to make a couple of plays just a game after being concussed. He will have a tougher task ahead of him against the Bengals, however.