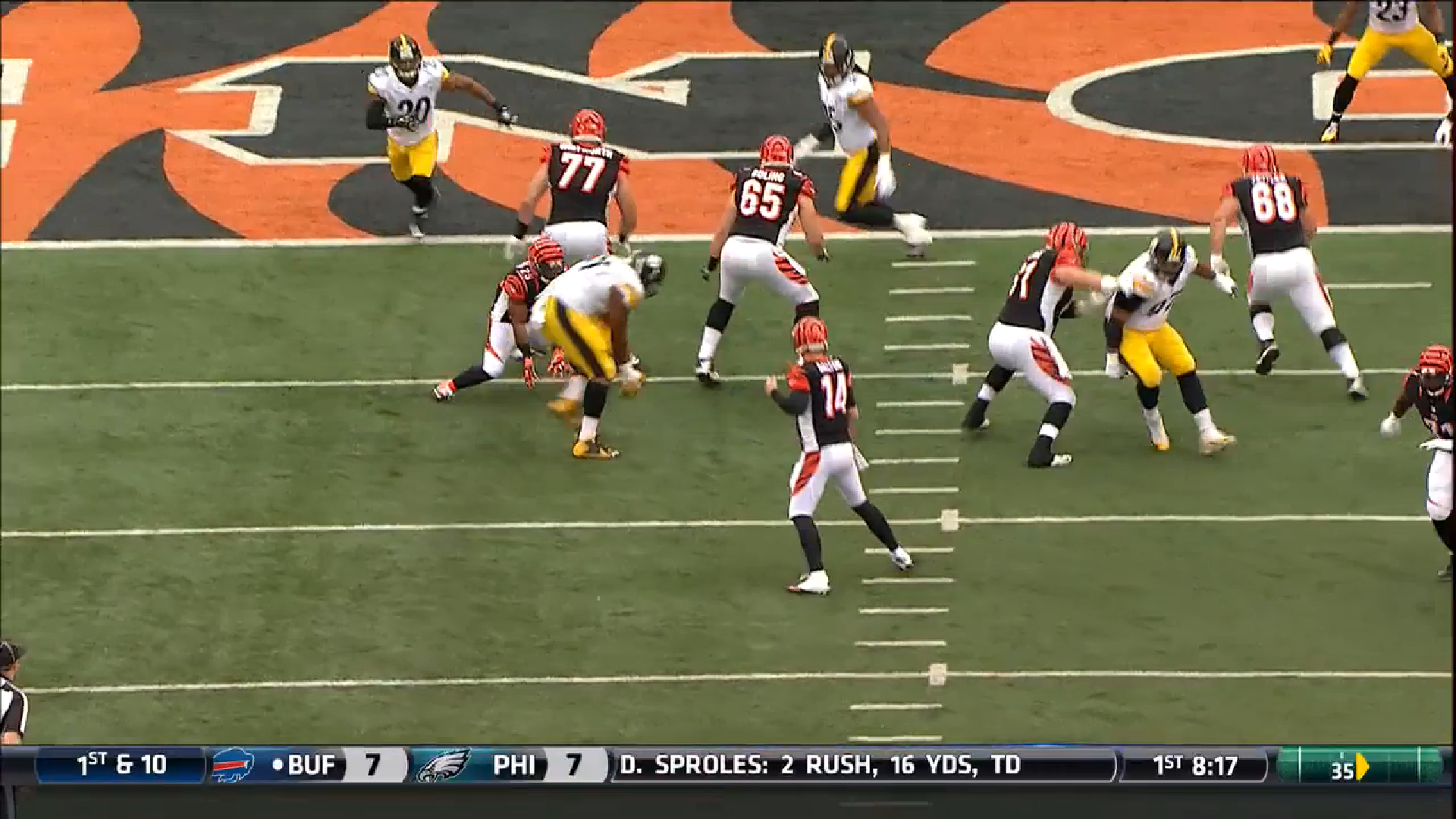 The name Stephon Tuitt may not have been getting called out during games quite as often as earlier in the season as the second-year defensive end quickly racked up 3.5 sacks before suffering an ankle injury, but the former second-round draft pick for the Pittsburgh Steelers has been playing well, and he showed it by winning several of his individual matchups on Sunday.

While the highlight of his game was no doubt the drive-ending interception of Andy Dalton in the red zone, it was not his only impressive play of the opening series. On the second defensive snap of the game, Tuitt did an excellent job of maintaining his gap before sending right guard Kevin Zeitler to the ground in order to make the run stop for a loss of two yards.

It is worth pointing out that two plays later, the Bengals line was able to seal him out of the A gap, which allowed Jeremy Hill a 12-yard gain. Tuitt allowed the center to hook his inside shoulder that got him turned. Really, however, it was Lawrence Timmons responsible for allowing the play to happen, unable to get into position to protect the gap.

The Bengals were able to drive all the way down to the four-yard line by the time Dalton threw the ill-fated inside screen pass to the running back that put his throwing hand in a cast for an indefinite amount of time.

After the back completed avoided any attempt of chipping him en route to the quarterback, Tuitt instinctively knew what to look for, and instead of continuing his pursuit, he broke off and cut in front of the intended receiver, showing impressive hands in snagging the low pass which, if caught, likely would have resulted in a touchdown with two linemen out in front to take care of two defenders.

The young end’s best rep, however, may have come in the second quarter on a run stop for no gain. Lined up between the right guard and tackle, he took on Andre Smith off the snap, getting his outside arm on his shoulder and swimming over the top of him, after which he pursued and tackled Hill at the line of scrimmage.

Later in the game, early in the fourth quarter, he displayed that individual skill set to win one-on-one in the passing game, dipping underneath Zeitler and putting pressure on the quarterback, forcing him to scramble up the field as a result. With nobody else there to cover the area, the play ended up gaining four yards, but it highlight’s Tuitt’s excellent hand placement at the point of attack.

While it may seem that his season had grown a bit quiet in recent weeks since his early explosion of production, during which he was sidetracked with an injury, Tuitt has continued his development over the course of the season, and still has more room for growth. He is ahead of where Cameron Heyward was at this stage of his career, though the actual game reps have helped that.