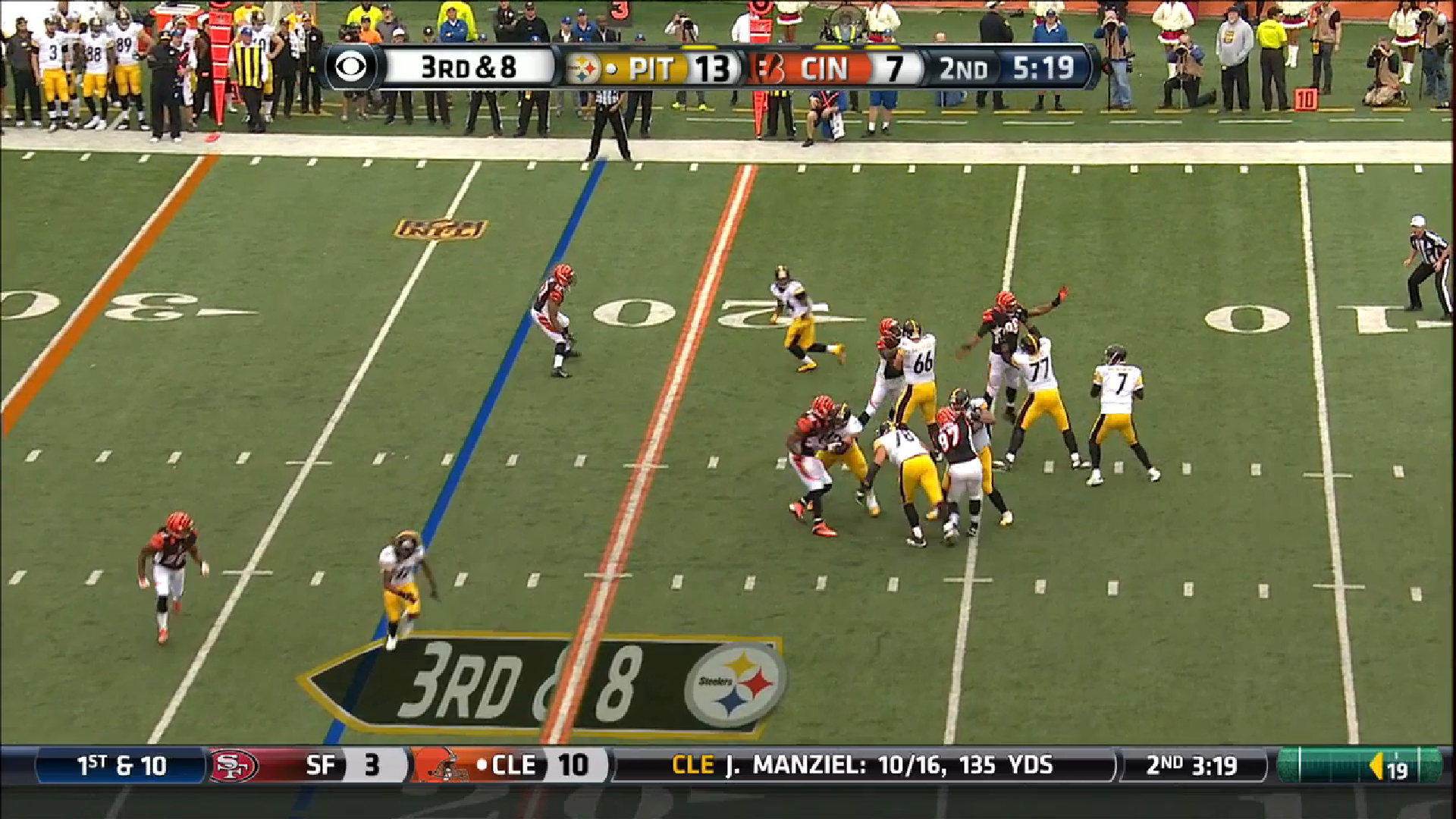 Though it doesn’t seem likely that he will actually be recognized for it, Pittsburgh Steelers right tackle Marcus Gilbert has gradually ascended as one of the better right tackles in the league right now. The fact that he only gave up his first sack of the season on Sunday should point to that fact, but his all-around game has been enjoyable to watch this year.

Part of that improvement has come as a result of the improved mobility that he has gained after cutting his weight down over the course of the past two seasons. The Steelers send him out on the second level much more this year, as this early run play shows, though it was stopped for no gain in part due to the lack of back side support.

There are times every once in a while in which he will fail to set his base and get driven back into the pocket, but it has been far less common than early in his career. Carlos Dunlap was able to walk him back into the quarterback on a third-down play late in the first quarter after failing to get his arms and legs settled at the same time.

He did a far better job stymying Dunlap’s power rush later in the second quarter on another completion on third down. This time it was third and seven with the defensive end set outside in a seven-technique look. Gilbert shot out of his stance well, and though he did not have his feet set properly, he absorbed the bull rush and anchored after a few steps to provide sound protection in the pocket.

Gilbert and Dunlap had a fine battle throughout the game, but the latter did get one solid win on his sack of Ben Roethlisberger midway through the third quarter on a third-and-two play inside of Steelers territory that forced a punt.

Dunlap got a great jump off the snap and was able to turn the corner by dipping his shoulder, simply beating Gilbert around the edge for the straight sack. The issue is, however, that it never should have counted, as the defensive end clearly made helmet-to-helmet contact.

The result should have been a 15-yard roughing the passer penalty and a mid-week fine, neither of which appear to have happened. For the purposes of evaluation, however, it is a sack that Gilbert allowed, though Roethlisberger did him no favors. Dunlap’s superb jump was served by knowing the play clock was about to run down.

There was a bit of a comical moment later in the third quarter after the officials picked up a flag for holding on Gilbert after they conferenced together that the right tackle did not hold; he simply overpowered the defender and put him on his back.

By this point in the season, this form of the offensive line has come together well enough for the offense to do just about anything, which they will need to if they intend to go deep in the playoffs. The right side of the line in particular has been a strength all year, where the lineup has been stable, and Gilbert has been performing at his highest level.