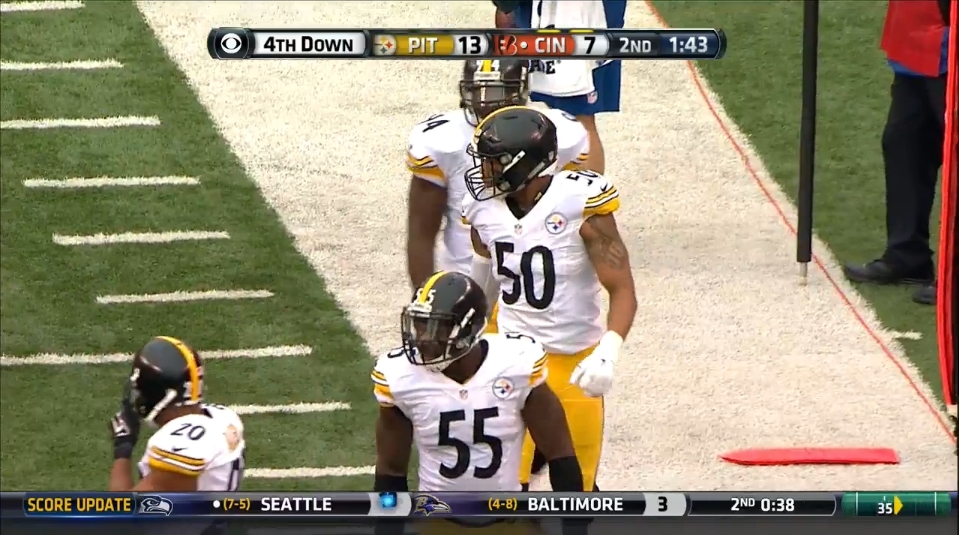 Throughout much of Sunday’s win over the Cincinnati Bengals, the Pittsburgh Steelers trio of inside linebackers in Ryan Shazier, Lawrence Timmons and Vince Williams were constantly around the ball.

In fact, that’s how it has been for the last few weeks as Timmons, Shazier and Williams continue to rack up high tackle totals for a defense that continues to play just well enough for the Steelers’ offense to win games down the stretch.

Defensively, Pittsburgh also held the Bengals to just 64 yards rushing in the win. A lot of that had to do with the play of the Cam Heyward, Steve McLendon, Daniel McCullers and Stephon Tuitt, allowing Timmons, Shazier and Williams free space to flow to the ball and make plays.

Although the inside linebacker trio played well for the most part, Sunday, there were a few key stumbles that allowed the Bengals to pick up big plays. Through a series of GIFs, I’ll break down some of the good and bad plays by the linebacker trio.

On the play the Steelers appear to be in man coverage with a single-high safety over the top.

Although the defensive backs appear to be in man coverage, Shazier and Jarvis Jones drop into zone coverage with Shazier dropping about five yards deep at the snap.

Shazier does a good job of looking at Andy Dalton’s eyes on the play, but his drop is not deep enough and he drops too far towards the hash marks, giving Dalton a huge window to throw into with Mike Mitchell closing in over the top.

Ideally, Shazier should have dropped back and to his right another yard or two. However, it’s hard to tell exactly what the play call was in this instance. Fortunately, the Steelers made an adjustment later in the game as Timmons was put in a similar situation and dropped just deep enough to force A.J. McCarron to put more air under the throw, causing an overthrow and an easy interception for Robert Golden.

At the snap, Shazier looks like he’s on a delayed blitz as he’s already starting to drift forward in anticipation.

While Shazier starts to lean forward slightly, he’s able to read the down blocks from Winston and right guard Kevin Zeitler, allowing him to burst forward knowing that a pulling offensive lineman is coming.

On this play Whitworth and center Russell Bodine serve as the pulling linemen with Bodine designed to kick out Bud Dupree on the edge and Whitworth pulling through to clean up Shazier in the second level.

Luckily for Pittsburgh, McLendon is so fast off the ball he actually crashes into the pulling Whitworth, allowing Shazier a free lane to Hill on the handoff. Despite making the tackle on the play, Shazier could have come in under control instead of having to dive at Hill’s ankles to make the play.

Regardless, a great combination of Shazier reading his keys and reacting to what he sees in front of him, as well as McLendon essentially blowing up the blocking assignment (Whitworth pulling) before the play could be fully established.

Forced to come out of the shadow of their own goal post due to a tremendous punt by Jordan Berry downed at the 2-yard line by Darrius Heyward-Bey, the Bengals were very conservative with under two minutes to go in the first half.

On the second play of the drive the Bengals call a simple running play to Hill with the linemen asked to down block to the right, allowing H-back Ryan Hewitt to serve as the lead back on James Harrison and Zeitler to serve as the pulling guard to lead up through the hole.

Harrison does a nice job of setting the edge while Timmons and Shazier immediately know what’s coming and flow against the down blocks. Timmons steps into the hole and takes on Zeitler at the point of attack, using his hands to shield him away, allowing the veteran linebacker to slide off of the block to get a hand on Hill, slowing him down.

While Timmons does the majority of the work on this play, Shazier does a great job of flowing in tandem with Timmons to make sure he’s there to clean up the play. As Timmons slows down Hill, Shazier is able to use his lateral speed to cut off Hill before the LSU product can get rolling down the left sideline.

As I said on Twitter, Monday afternoon, this was by far my favorite play by Timmons and Shazier in the game. They worked so well in tandem to make sure the Bengals didn’t bust off a long run from inside their own 5-yard line. This play won’t jump off on tape for most, but it had me constantly rewinding to watch just what No. 94 and No. 50 were able to accomplish on this play.

Facing a 3rd and 3 from their own 9-yard line, the Bengals line up in a twins formation with McCarron in shotgun and Hill lined up as a sidecar to his right. Before the snap, McCarron calls Mohammad Sanu in motion from the right slot to the left in a bunch formation behind Marvin Jones and Tyler Kroft.

In this formation the Bengals have been known to throw a quick swing pass to Sanu, allowing him to work behind blockers, who served as Jones and Kroft in this instance.

Prior to the snap, Shazier starts to signal what’s coming as he’s watching Sanu run in motion. That’s a testament to good film study and remembering what Cincinnati likes to run out of these formations.

At the snap Shazier knows immediately what’s coming as McCarron swings the ball to Sanu. Before the veteran Bengals receiver can even turn upfield, Shazier is on him for the tackle, resulting in just a 1-yard gain, forcing the Bengals to punt from their own end zone.

This play was a great job by Shazier to diagnose the play prior to the snap and then have the athletic ability and tremendous closing speed to shut it down before Sanu could pick up the first down.

This play sums up why Shazier was drafted No. 15 overall in 2014. The speed, instincts and playmaking ability were on full display here.

Despite having a strong game defensively for Pittsburgh, Timmons had a few poor plays that resulted in substantial pickups by the Bengals.

On this play, Cincinnati faced a 3rd and 2 from Pittsburgh’s 49-yard line trailing 26-10 early in the fourth quarter.

At the snap Timmons is slow to react to the read-option between McCarron and Giovani Bernard. With the slow reaction, Timmons allows Kevin Zeitler to chip off of Tuitt before reaching Timmons at the second level.

From there, Zeitler is able to keep his feet moving against the flat-footed Timmons. This allows Zeitler to push Timmons out of the hole, letting Bernard cut off his backside for the 18-yard gain.

Timmons did look for a holding call on the run, but there was no hold whatsoever. He was simply beaten one-on-one by Zeitler in the second level.

Outside of those five plays, the Steelers inside linebackers played well in the 33-20 win, as evidenced by the grade I gave the group in my positional grades piece.