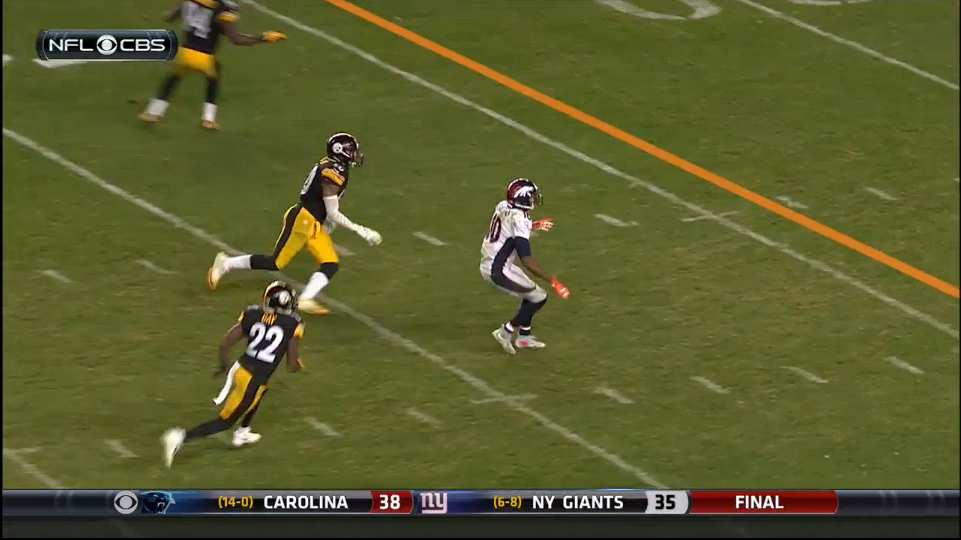 For the second straight week the Pittsburgh Steelers’ inside linebacker tandem of Lawrence Timmons and Ryan Shazier turned in a strong performance against the Denver Broncos in Pittsburgh’s 34-27 come-from-behind win at Heinz Field.

Timmons and Shazier combined for 12 tackles (six each) in Sunday’s game as Shazier also defended a career-high three passes and recorded the first interception of his career off of Brock Osweiler late in the fourth quarter.

Much like I did last week, I took a look at coaches film this week to see how Timmons and Shazier fared against Gary Kubiak’s zone blocking scheme. Through a series of GIFs, I’ll break down the performances of Timmons and Shazier.

As you can see here from the GIF, the play call is designed for Lawrence Timmons to come on a delayed blitz as a stunt is run in front of him by Cam Thomas and Stephon Tuitt, allowing Timmons to burst through an open gap between the left guard and left tackle.

Fortunately for Timmons, Osweiler fumbles the shotgun snap right away, allowing the veteran linebacker an extra second or two to get home on the blitz.

Over the last few weeks Timmons has done a nice job of disguising blitzes and getting ample pressure on unsuspecting quarterbacks.

Prior to the snap it appears that Timmons is slowly shading out to cover Andre Caldwell in the slot, which might have thrown Osweiler and his protection off.  Denver left guard Max Garcia doesn’t even give Timmons a look as he’s passing off Thomas to pick up the stunting Tuitt.

Timmons will likely never get an easier sack, but he shows great burst and doesn’t hesitate one bit on the blitz.

Against the Broncos’ zone blocking scheme, the Steelers linebackers had to stay clean and flow freely against the run.

On this play, Timmons is unable to do either until the play is almost by him.

In the redzone, Timmons is slow to react to the initial run, which allows right guard Louis Vasquez to get into Timmons at the second level, negating the veteran linebacker’s ability to stay clean and flow to the ball.

Right at the snap Timmons appears slow to react to what is clearly a running play to his side.

Although he’s slow to react and doesn’t flow as cleanly as he had prior to this play, Timmons is able to shed the block of Vasquez quickly to bring down Ronnie Hillman before he can find the end zone.

This play was similar to the one run by Giovani Bernard last week in Cincinnati in which Kevin Zeitler was able to get to Timmons at the next level and move him out of the way.

It’s very rare, but sometimes Timmons can be caught flat-footed and slow to react to running plays, but his athleticism, strength and nose for the ball carrier allows him to fix mistakes at the snap.

I thought this was the play of the day for Shazier, who was one of the top defenders on the field all day, Sunday, for both sides.

At the snap Shazier is quick to diagnose and is lite on his feet as he’s able to step up and duck underneath Ryan Harris’ block in the second level.

By doing this, Shazier is able to squeeze down against Cam Heyward’s backside, which lets the second-year linebacker to come off of the block to bring down Hillman for a 2-yard gain.

Going up against the zone-blocking scheme of Kubiak and the Broncos, Shazier proved to be too quick for the Broncos offensive linemen that were asked to try and reach him at the second level.

Shazier did this quite often, Sunday, which let him have a clean shot at running backs.  As athletic and fast as he is, it wasn’t much of a surprise that the Ohio State product was able to stay clean against offensive linemen throughout Sunday’s game.

Just one play after Shazier’s impressive tackle on Hillman, Timmons may have one-upped his fellow linebacker.

Facing a first and ten at the Denver 30-yard line, the Broncos go with a stretch run with Hillman to the right side.

Prior to the snap you can see Timmons shading to his left in anticipation of the stretch run. By shading just a yard over to his left, Timmons puts himself in great position to flow cleanly to the sideline to force Hillman out of bounds.

At the snap Timmons is on the move to his left. From there, Broncos right tackle Michael Schofield attempts to seal Timmons off at the second level, but by using his speed and leverage, Timmons is able to keep Schofield off of him.

After shedding Schofield, Timmons is able to find Hillman and combine with Brandon Boykin to force the Bronco running back out of bounds for a short gain.

Although Timmons and Boykin will get credit for the tackle, take a look at Tuitt against Vasquez inside.

The second-year defensive end blows up Vasquez and gets off the block quickly, forcing Hillman to flatten out along the line of scrimmage, which in turn allows Timmons to close the gap.

Yes, the pass rush of the Steelers ultimately forces this interception by Shazier, which led to Antonio Brown’s second touchdown of the game from Ben Roethlisberger.

However, Shazier should get plenty of kudos from the coaching staff for his break on the ball and level of comfort in zone coverage.

Just last week Shazier struggled at times with his drops and looked completely out of whack early on against Cincinnati.

This week was a step in the right direction for Shazier in coverage, and it doesn’t get much better than the drop he made on the interception of Osweiler.

At the snap Shazier bites slightly on the play-action fake from Osweiler to Hillman. From there, Shazier is able to quickly correct the mistake and drops ten yards deep into the middle of the field before finding Emmanuel Sanderson a what looks like a dig route.

Despite running what looks like a dig route across the middle, Sanders notices Osweiler in trouble and stops his route to work back towards the third-year QB.

Due to this, Shazier is able to freelance on the play and lock onto Osweiler’s eyes. Fortunately for Shazier, Osweiler is staring down Sanders, which allows the Steelers linebacker to break on the ball for his first interception.

This is play that Shazier should build off of in zone coverage. Like I said, he hasn’t looked very comfortable in zone coverage as of late, but in the second half he was outstanding in both phases of the game.