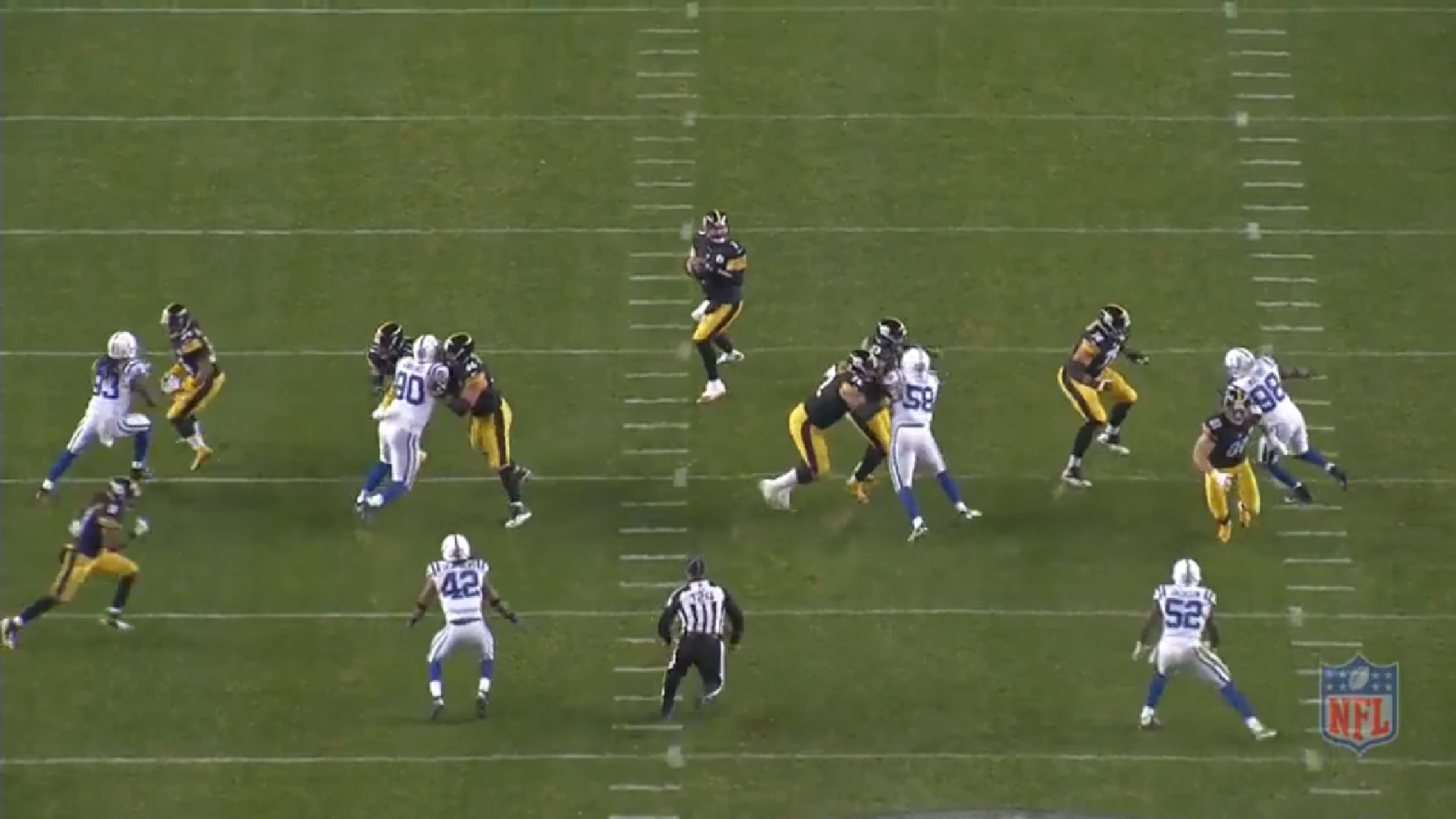 Perhaps Pittsburgh Steelers right guard David DeCastro is not necessarily having his flashiest, most high profile season, but I do think that he is having his most consistent one, which has been his biggest issue. It’s also been his healthiest.

The fourth-year former first-round pick has not had a bad game yet this season, and the Sunday night victory of the Colts, as you might imagine, did not break that streak, as the ground game compiled over 150 yards and Ben Roethlisberger did not take an official sack.

I was particularly interested in his pass protection, which I felt was not at the same level as his run blocking, and I do believe that he has brought this aspect of his game up to a quality level this year, as the offense’s vertical success should corroborate. His working of two defenders on Jesse James’ 20-yard reception in the first quarter is one example.

Midway through the third quarter, DeCastro showed off his improved awareness in pass protection, sitting back with no immediate threat and picking up the linebacker in plenty enough time to ride him out of the pocket, allowing Roethlisberger to convert a third down play with a three-yard pass.

Two plays later, on another explosive play down the field, the entire right side of the line did well staying disciplined in their blocks. As the left defensive tackle looked to want to come up the arc and rush at the right tackle, DeCastro stayed on him on what looked to be a man blocking scheme, absorbing his eventual bull rush to give the quarterback a clean pocket to get the ball vertical for a 26-yard play.

Two plays later, Roethlisberger hit on another 26-yard pass down the field as the protection scheme worked in concert to secure the pocket. DeCastro first passed the stunting defensive tackle along to the outside while guiding the edge rusher to the middle of the field to combination block him with the running back, driving him away from the line of scrimmage.

There were a couple of plays, particularly in the running game, in which he failed to make a solid connection on his block, which tended to be plays out in space. On one run early in the third quarter, he was caught committing to the linebacker’s inside, allowing him to brush off him with an outside move and make contact with the running back, though he didn’t make the tackle. This was not necessarily representative of his overall day in run blocking, of course.

A few plays into the Steelers’ next drive, it was DeCastro’s man who ended up sacking Roethlisberger, though of course the play was negated by a defensive holding call. He and the center switched off against a stunt, and the right guard seemed to have a good read on the rusher, but the linebacker got a good jam on him that sent him back. When Roethlisberger stepped up into the pocket, the linebacker was able to come off and bring him down.

This breakdown visibly ignored the several times in which the Steelers ran their staple pull running play to the left with DeCastro as the lead blocker. Predictably, the offense found a lot of success on these plays, but we’ve seen this time and again. He still needs to work on hitting his contact point out in space, but he’s already long ago established himself as a quality starting guard.