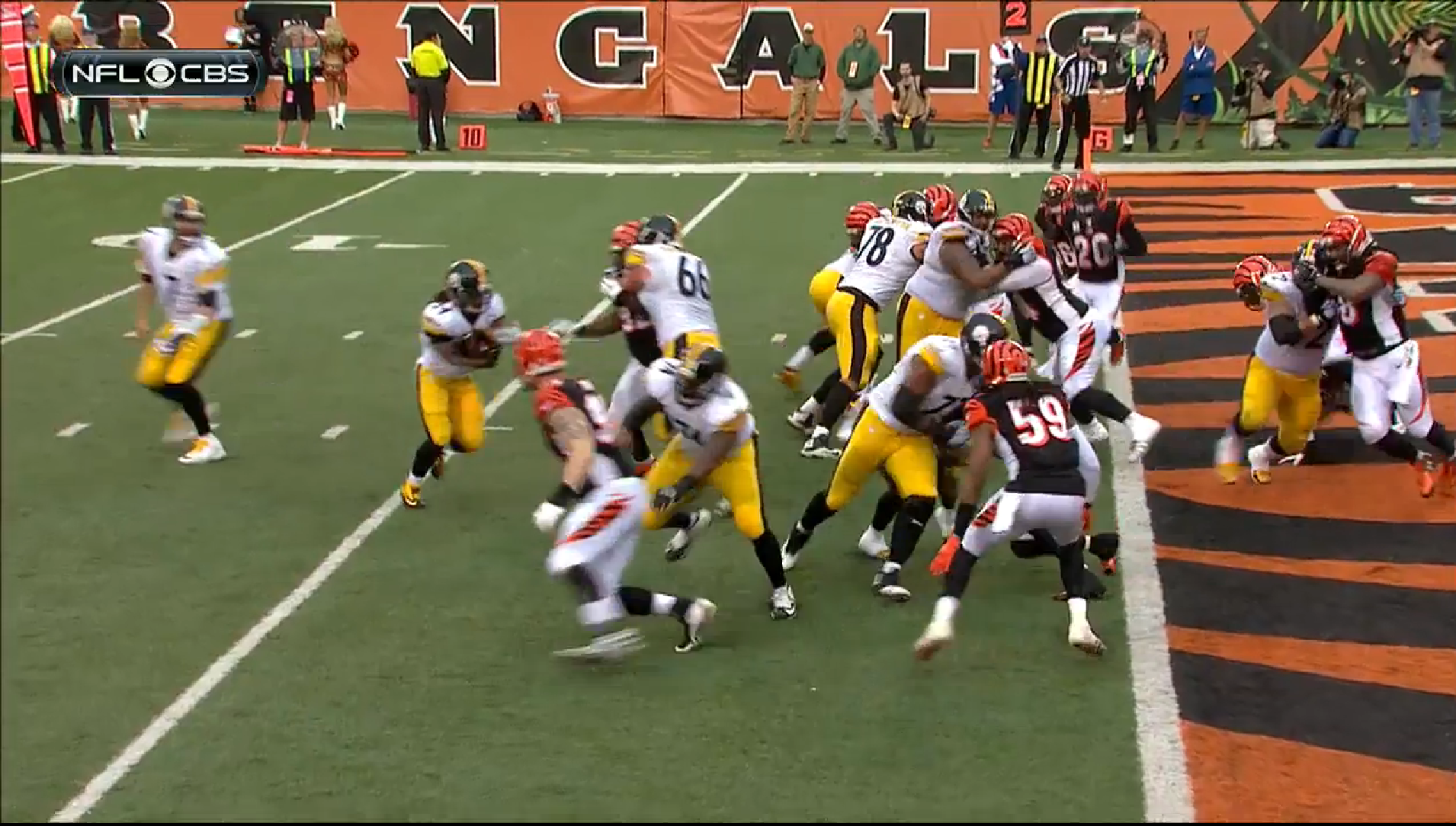 Pittsburgh Steelers right guard David DeCastro has certainly come a long way since the first time he had to play against Geno Atkins, which came during his rookie year, just after he had returned from an MCL tear and missed the first 13 games of the season.

Atkins, when healthy, is a top talent in this league, to be sure, so DeCastro had his bad reps, but he did far, far better holding his own four years later, which should serve as a fair barometer for his level of development. I don’t know that he will ever make it to a Pro Bowl, but this year may be his best argument for it thus far.

Not that you would know it from the second run of the game by the Steelers, on which Atkins really just whipped him off the snap. Lined head up across from the right guard, the former Pro Bowl defensive tackle perfectly executed a swim move over the top of DeCastro to blow up the running lane and erode the blocking scheme.

He had settled down by the end of the drive, however, including neutralizing him in pass protection on a 19-yard pass to the one-yard line on third and three. The center came over late to provide help, but he had already gotten Atkins well under control on that occasion and didn’t seem to be going anywhere.

Say what you will about Vontaze Burfict the person, but he is a heck of a football player, even if his on-field actions many would argue display a lack of respect for the game. When it comes to making plays, however, he knows what to do.

Burfict helped to spoil a strong block on the defensive tackle to help open up a running lane that DeCastro pulled simply by reading the play and hitting the hole. Had Burfict not gotten there in time, there was a lane forming that could have churned out a nice play.

Atkins this year against most competition has been his old self when it comes to rushing the passer, and that no doubt showed a couple times against DeCastro, on one instance forcing the quarterback to backpedal and throw the ball away. On the play, Atkins set DeCastro up on his far shoulder for an inside spin move. While the guard mirrored nicely, he was put off base and driven back on skates into the pocket.

But DeCastro finished off the day strong, throwing the key block on the second rushing touchdown of the game that put the score out of reach. Speaking of reaching, that was the type of block required here, with the defensive tackle set to his outside shoulder

The Bengals have a quality front, so this proved to be a good test for the former first-round pick, and he held up well overall. He got outmatched a couple of times by an All-Pro talent, but that will happen to just about everybody at times.