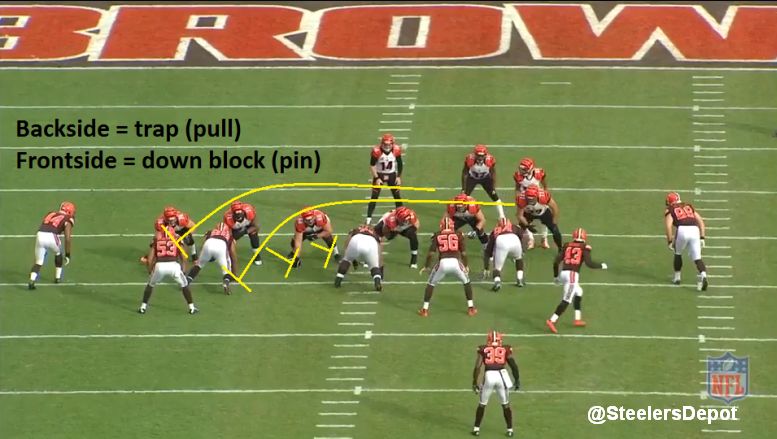 Just me doing the scouting reports for now. But like usual, a preview of the opponent this week – the Cincinnati Bengals.

This is actually our first repeat opponent all season long. So there’s a little less to write about because it’s a team we’re already familiar with. Check out the last scouting report we did for additional information. I don’t see a huge difference from that Bengals’ offense six weeks ago to today.

Before we get into anything, I want to start with maybe the most striking stat of all. Since 2013, the Bengals are 18-3-1 at home. That’s as good as it gets. Tough stadium to walk out with a victory.

Giovani Bernard is still outproducing Jeremy Hill by a considerable margin. Bernard is averaging 5.1 yards per carry while Hill sits at 3.6 though it appears the Bengals are determined to get Hill going. On the season, Bernard is still leading the snap count over Hill, 56%/42%. In their last competitive game, Week 11 against the Arizona Cardinals, Bernard outsnapped him 68/32 percent.

They’ve been throwing in more wrinkles and getting their receivers involved in the backfield more often the last several weeks. Mohammad Sanu has three carries over the last five games with Marvin Jones ripped off a big play two weeks ago versus the St. Louis Rams. 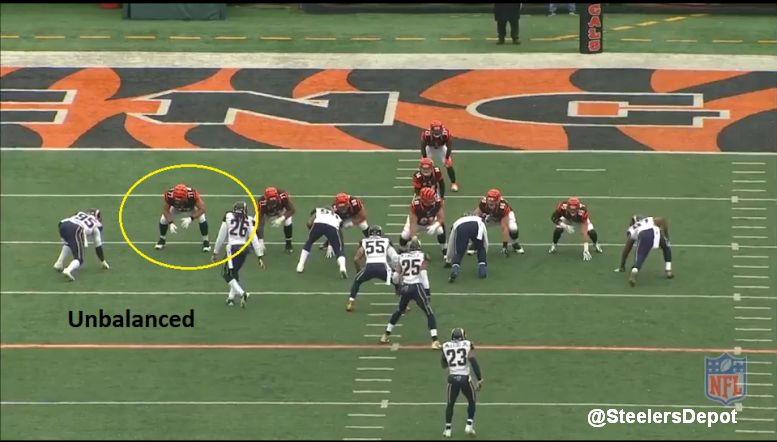 They run a lot of schemes but the majority of the time show to be a gap team. Lot of power concepts. Whether that’s simply pulling the backside guard, a pin and pull scheme with multiple pullers, or a dart scheme with the backside tackle trapping, you get it all. 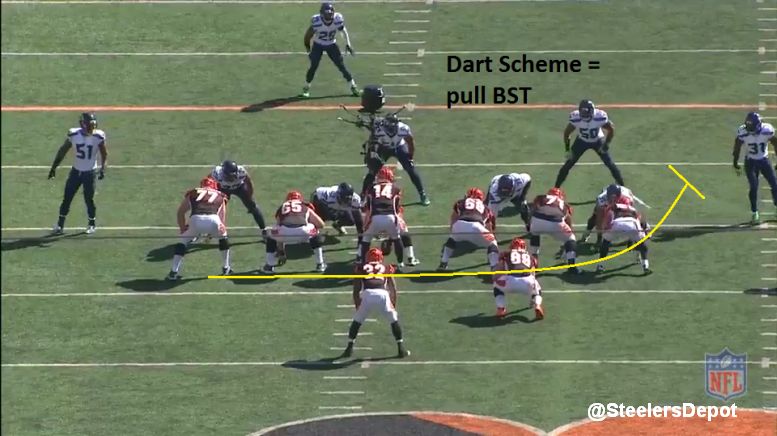 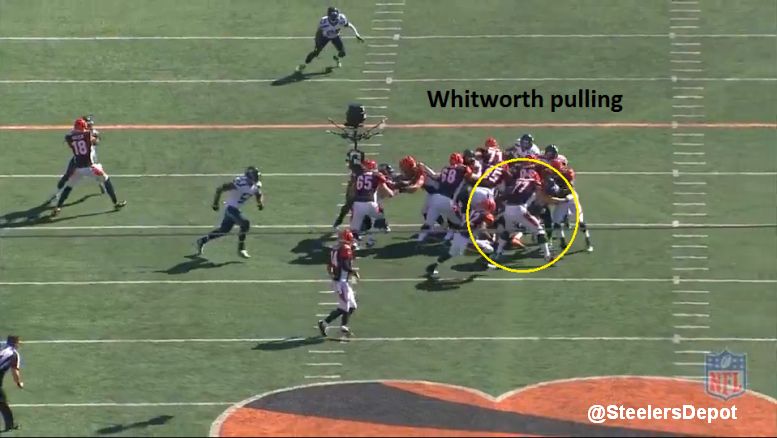 Anytime they line up in or motion a receiver tight to the line in a two point stance, expect a power concept away from the receiver. Here it is with their pin and pull. 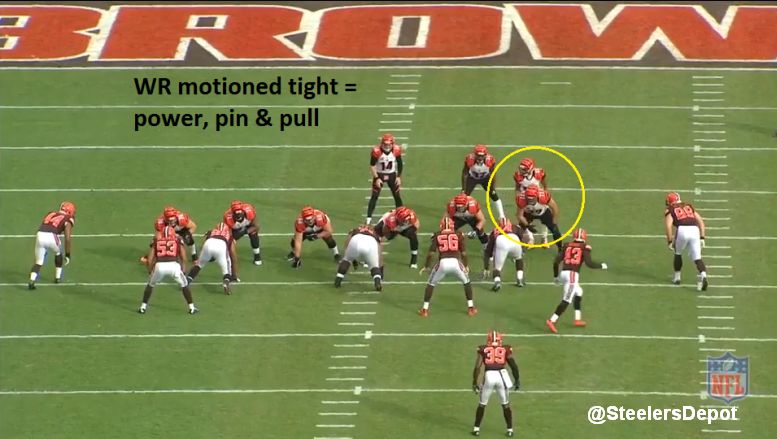 As he continues to get more comfortable in the NFL, they’re giving Jake Fisher some more freedom and putting him in some extra specialized packages. Will put him in the backfield as a lead blocker while running some of their power. 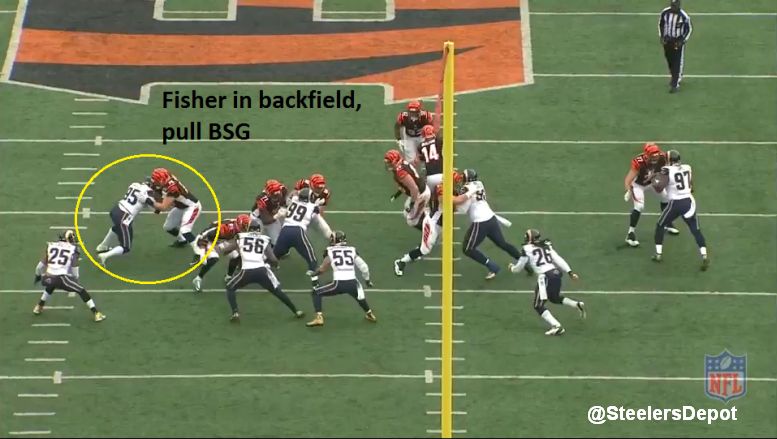 You get some inside zone runs, too, with an emphasis on securing a strong double-team up front.

The offensive line has been overall consistent with four lineman playing 96%+ snaps on the season. The only exception has been at right tackle with Andre Smith missing some time, but he will play Sunday. So their starting five from Week One will be there in Week 13, a stark contrast to the Pittsburgh Steelers.

Andy Dalton, in a word, is efficient. Everything about his stats scream it, all while providing big plays, rising above the dreaded “game manager” tag. 66.1 completion percentage, only 6 INTs, and has taken just 20 sacks. Only 5 QBs have a higher percentage, only 5 QBs with 200+ attempts have fewer interceptions, and he’s the 19th “most” sacked quarterback. Stellar numbers across the board.

Weapons are still galore and they haven’t dealt with any major injuries that affect. Tyler Eifert is expected to play after missing last week. 33 of his 46 catches have gone for first downs while 11 of his 12 touchdowns have come in the end zone. The other was from 22 yards out, just on the fringe.

A.J. Green, Eifert, and Marvin Jones are the only trio in the whole NFL with at least 40 receptions, 500 yards, and four touchdowns. And that is even before talking about a weapon like Sanu, who is dangerous and versatile in his own right. Gadget threat with his background running the Wildcat at Rutgers.

Like we wrote about last time, Hue Jackson is a mad scientist who will throw every look at you. Hasn’t changed. Ton of pre-snap shifts and motion, about as complex and involved as you’ll see from any team. Helps identify man/zone while seeing how you react as a defense and if you fail to adjust properly on any given play. In a hostile environment, even when the crowd will be quieter because their offense is on the field, it presents an additional challenge. Gotta be detail-oriented pre-snap.

Jake Fisher has been targeted twice over the last two weeks. Both the same situation. In goal line, on the opponents three, on second or third down. One target was off a bootleg with Fisher coming from the backside to the boot while another was on a post underneath the goalposts. Both were complete, the former was intercepted, but it’s easy to lose a big body like him on the goal line. Have to identify him – he wears #74. He still has to declare eligible on every play, helping with the alert process.

In other tricks, you’ll still get their Emory & Henry package. Three lineman core to the formation with each tackle split out. They’ll dress that up even further. In this instance, shifting to a 4×2 look (instead of 3×3) with three offensive lineman to the top. Radical stuff. 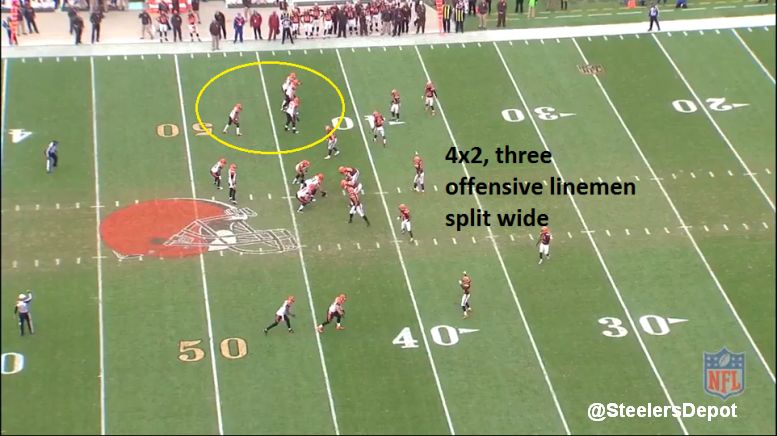 Also as we talked about, and as so many teams run, the Bengals have a boatload of packaged plays. Run/pass options for Dalton. Too many to go into but you’ll know you’ll see it Sunday. One example is throwing the smoke screen versus a soft corner. 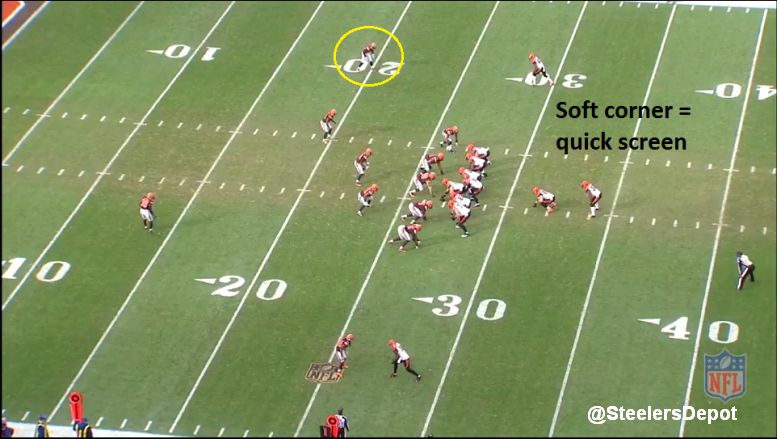 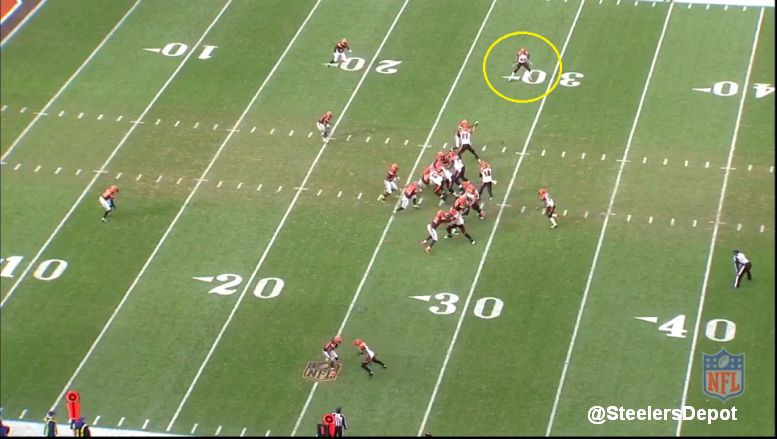 As so many other teams do, the Bengals will present false keys to set up their passing game. Fool you by pulling their guard so much in their actual run game, they’ll pull in the passing game to suck you up and beat you vertically. Watch for it early in the second quarter on first and ten. Did it to the Rams and Browns. Only two man routes to help with protection, hoping they can catch you napping and throw one over your head. 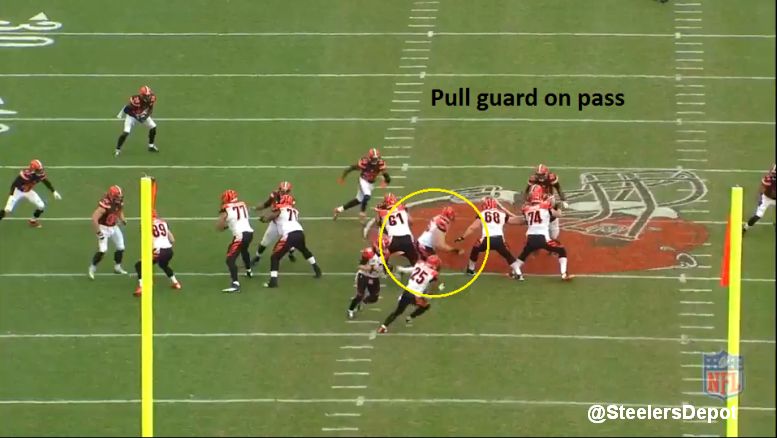 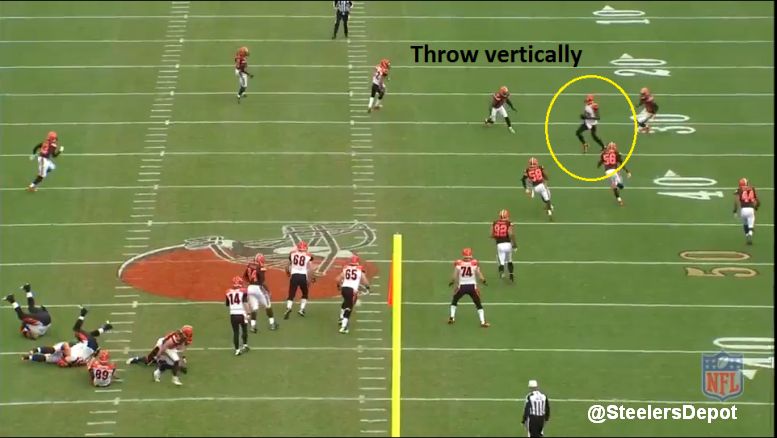 In 3×1 sets, their first read is to the backside. Often isolate A.J.Green and with the right leverage from the corner, will target him first. 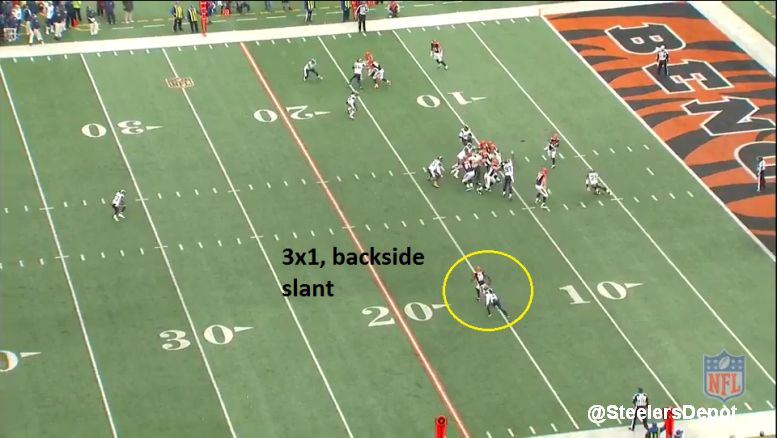 Kick return formation is a 6-1-2-2 with Cedric Peerman serving as the upback to Brandon Tate. Especially if Adam Jones is out Sunday, Tate will also be the punt returner. On the punt return unit, Dre Kirkpatrick and Troy Hill serve as the jammers. They have some great special teamers on their punt return unit. Peerman, one of the best all-around guys in the league, Rex Burkhead, cut from a similar cloth, and the long Margus Hunt. He stands at 6’8, 290 pounds with an 82 inch wingspan. Presents an issue if he gets a chance to block a punt.

Punter Kevin Huber is the holder on field goals. He’s never thrown a pass or formally attempted a rush in the NFL. One worry is the fact the Bengals use two tight ends as the wings on field goals. Ryan Hewitt is the left wing and Tyler Kroft is the right wing. Two skill positions to throw to. Always need to have that in the back of your mind.

Kicker Mike Nugent has missed just three field goals and one extra point this season. He is 7/9 at home. His long this season is 47 yards and hasn’t even attempted a 50 yarder. His career long is 55 yards, putting his “max” field goal range at the opposing 38.