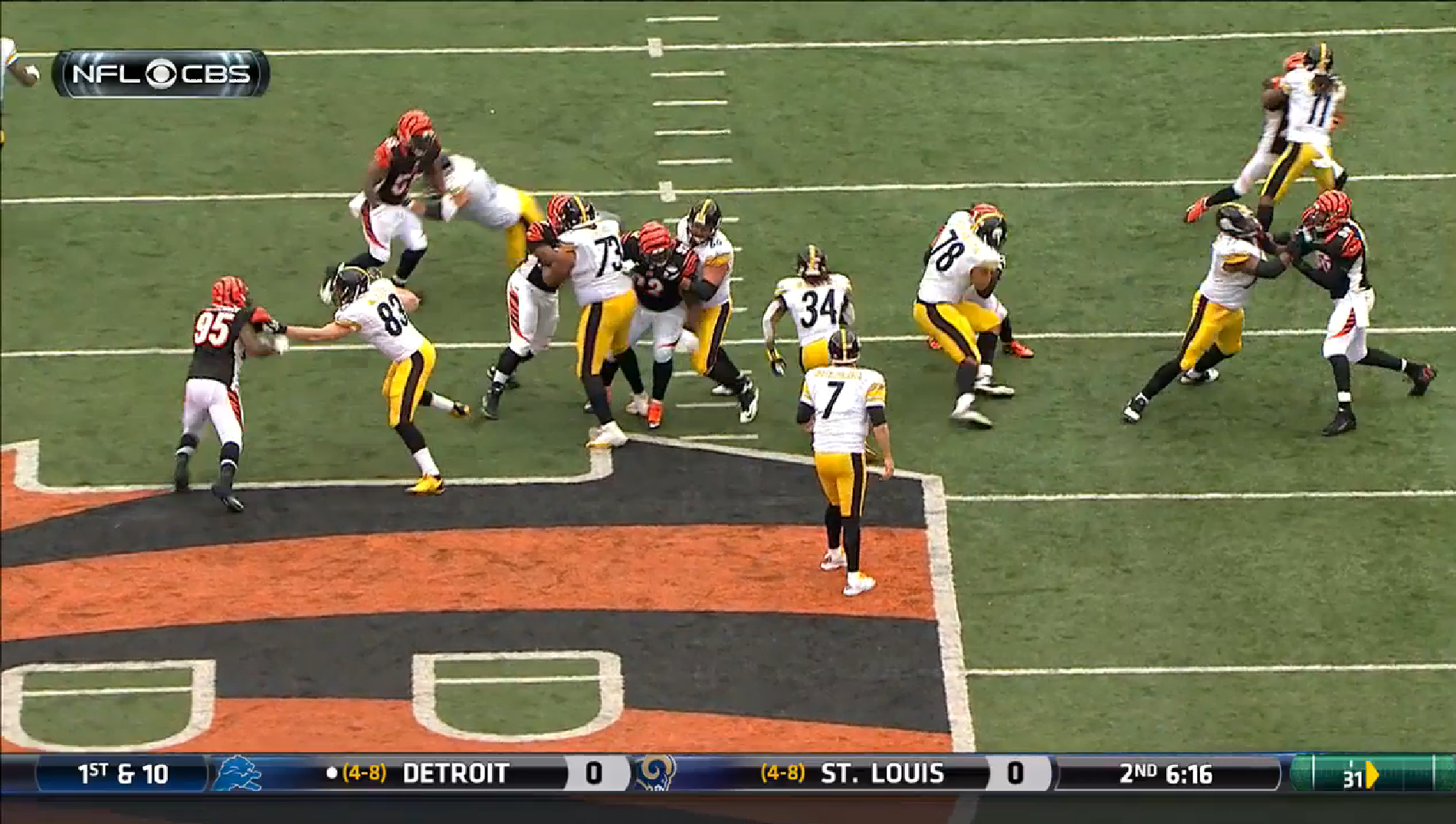 Alejandro Villanueva has no doubt made solid progress since being thrust into the starting lineup. He is generally able to hold his own, but he is still making adjustments to both the talent level and speed of the game. I think the game against Cincinnati may be a fair representation of where the Pittsburgh Steelers left tackle currently is in his development.

While the second play of the game as a successful seven-yard pass for the offense, Villanueva certainly embarrassed himself a bit, getting knocked to his backside by Michael Johnson. Johnson was initially blocked by the tight end before Heath Miller released him, which makes it all the more perplexing how he could be so thrown off his base. It seems as though he had his feet set, but his arms were tucked to his chest, which gave the defensive end the advantage.

Naturally, he wanted to redeem himself after being put on the ground, and he started to do that on the next play, this time getting his hands out in front of him and mirroring Johnson well as Ben Roethlisberger completed a 31-yard pass on third down.

A bit later in the quarter, Roethlisberger was able to complete another pass to Miller, but not without taking some contact allowed from the left side. Admittedly, Villanueva may have gotten tangled up a bit with the back flashing out of the backfield in this instance.

No doubt the most interesting, and perhaps the best, play of the day for the first-year lineman came in the second quarter on what proved to be the Steelers’ longest running play of the game, a 15-yard run through the right-side B gap by DeAngelo Williams. Villanueva pulled to his right and sealed off the right edge of the running lane to provide his back the avenue.

It was a few plays after this that Roethlisberger was brought down for the first sack of the game by Johnson, but the reality is that this one is more on the quarterback than the left tackle. Villanueva pushed the defensive end up the arc. Where he faltered is after doing so he rested, almost as though he forgot who he was blocking for. Still, while he needs to be more aware in such a situation, the fault here lies with Roethlisberger for not getting the ball out.

Something else that I noticed in this game that may be an area of improvement is that he seemed on several occasions to be slow off the ball. I don’t know if he was having trouble hearing the snap count or what, but there were times where he was the last player to move, and I’m not sure that I recall observing this in previous games without verifying it. On this particular instance, he was just able to push Johnson out of harm’s way after getting beaten off the ball.