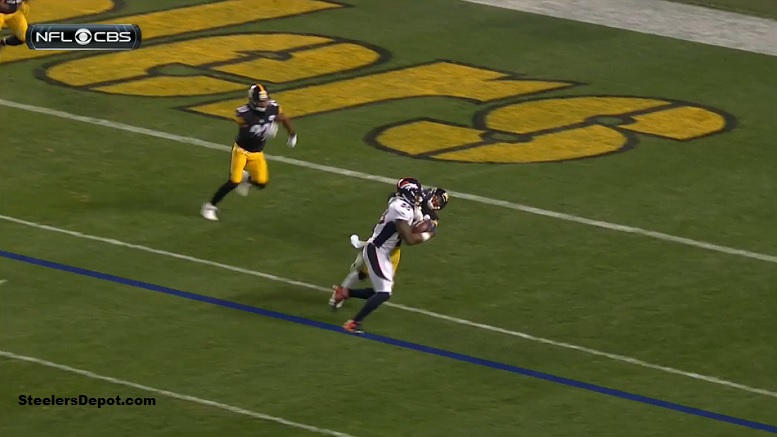 After Sunday’s win over the Denver Broncos, Pittsburgh Steelers head coach Mike Tomlin told the media that his team really didn’t make any changes defensively in the second half that included the unit pitching a shutout. Scheme-wise, that pretty much seems to be the case after going over the TV tape a few times, but that’s not to say that weren’t any changes made, because there were some.

The most notable change was the fact that cornerback Antwon Blake only appeared to play 4 or 5 total defensive snaps in the second half as fellow cornerbacks William Gay, Ross Cockrell and Brandon Boykin were on the field together for most of the second half.

While Blake wasn’t as awful as he’s been in past games, he certainly was far from perfect. With two minutes remaining in the first half, Blake was lined up on the outside and was singled-up against Broncos wide receiver Demaryius Thomas at the Steelers 6-yard line. After the football was snapped, Broncos quarterback Brock Osweiler quickly threw a screen pass to his right to Thomas and Blake failed to bring down the big wide receiver with a high tackle attempt. The result of the play was a touchdown.

In the second half, one of Blake’s four snaps almost resulted in an explosive play for Thomas. On that play, Blake was lined up in press-man against Thomas, who got a free release to the outside at the snap of the football. Osweiler dropped the deep pass over the head of Blake on the play, but Thomas couldn’t secure completely before landing out of bounds. Had he made the catch, the Broncos would’ve been set up at the Steelers 20-yard-line with a chance to add to their 7-point lead.

By the looks of things, Tomlin is continuing to use the same cornerback rotation that’s employed for the last several games. In other words, Blake starts and Boykin doesn’t start seeing the field until the third or fourth defensive series. I doubt that changes in the Steelers last two games of the regular season.

As soon as we wrap up our defensive game charting, we’ll have more information as it relates to any scheme changes that were made on defense during the second half.