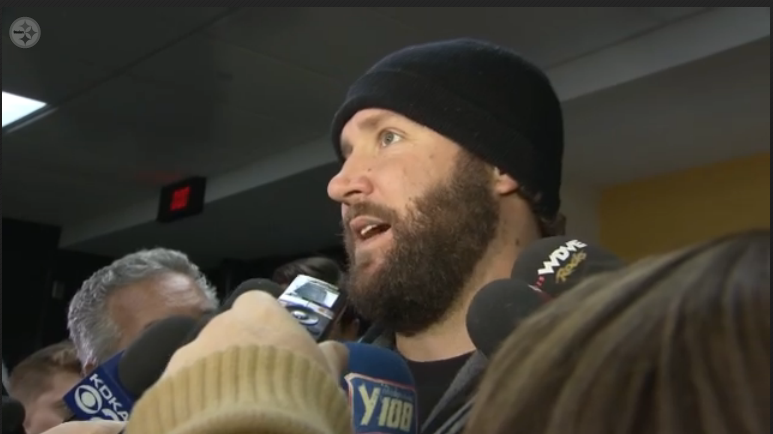 Ben Roethlisberger was almost the GOAT.

His 4th quarter interception to linebacker Brandon Marshall was just one of the bizarre, years-off-your-life plays that took place Sunday at Heinz Field. Had it not been for the Pittsburgh Steelers’ defense buckling down and getting a stop, it would’ve been the play that fans remembered.

For Roethlisberger, he was happy that his defense held and have the opportunity to finally end the game. He found Antonio Brown – who else – on 3rd and 5 with 1:30 left for a first down, completing the comeback.

“When you fall off the horse you get back on it. We knew we had to get another first down. I was glad they called a pass. I saw the coverage I wanted and I went to my guy. He made a play for me,” Roethlisberger told reporters after the game.

In typical Steelers’ fashion, for better or worse, they made a gutsy call. Most teams would have run the ball on that third down, taking the clock to well under a minute, and hoping the defense can make one last stand. Not Mike Tomlin. The risk paid off and Denver never saw the ball again.

Back to the play that nearly robbed the Steelers of the win. Roethlisberger was blunt, but short, on what happened on the interception to Marshall.

“Trying to make something happen. Just gotta be smart. But our defense bailed us out.”

Roethlisberger finished the day 40/58 for 380 yards, three touchdowns, and two interceptions. As we wrote last night, it was just the second time he’s ever completed 40 passes in a game and only the second time he’s attempted 50 passes in a victory. All against the number one defense in the league. According to the team, it’s the first time the Broncos’ defense has allowed 30+ points in 363 days.

Despite playing in only 10 games, he surpassed 3000 yards for the 10th straight season.