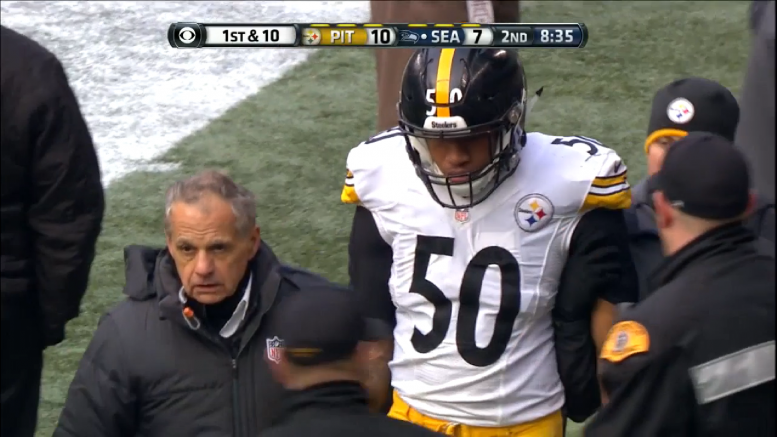 The Pittsburgh Steelers have thus far had an interesting relationship with the league’s new concussion protocols, including their newly appointed ‘unaffiliated neurotrauma consultants’, or spotters, who are in attendance at every game and have the opportunity to review film for signs of a possible head trauma, and have the authority to pause a game to check on a player if deemed necessary.

The Steelers were the first team for which this applied during the third game of the season when Antwon Blake was briefly pulled out of the game by the medical consultants—including the team’s own physician—during the middle of a defensive drive.

On Sunday, Pittsburgh had two additional players suffer concussions or concussion-like symptoms and entered the concussion protocol. We have already talked about Ben Roethlisberger after he self-reported concussion symptoms, and how that relates to a necessary shift in the culture about head trauma.

But Ryan Shazier’s head injury was more serious, and was visibly woozy when he left the field. Richard Ellenbogen, the head of the league’s head, neck and spine committee, spoke to Peter King for Monday Morning Quarterback yesterday about the situation.

Ellenbogen reviews the post-game reports of every UNC in the league. He was there personally on Sunday evening in Seattle. He saw Shazier take a blow to the head and fall to the ground during a second-quarter play, and he saw him get up woozily.

The incident happened after the Steelers scored a touchdown, on the ensuing kickoff. Shazier chased down in coverage, in the process taking a blow to the head from Will Tukuafu, Seattle’s 280-pound fullback serving as a wedge buster.

In spite of the fact that he came off the field obviously woozy, King writes, Shazier told both Ellenbogen and the team doctors that he was fine. But the UNC reviewed the footage and ordered a more thorough evaluation.

According to Ellenbogen, head coach Mike Tomlin came up to a protesting Shazier and told him directly, “you will listen to these doctors, and you’ll do it now”. After that, the UNC and team doctor ran the tests.

In spite of the fact that the linebacker was able to clear the verbal tests, answering basic questions about his surroundings and the game, the team physician was the one who ultimately decided that he was not okay, having a great deal more familiarity with him, and deemed him out for the game.

Combined with Roethlisberger’s self-reporting and the cooperation with the head coach and team physicians, Ellenbogen, a UNC and the head of the league’s committee on neurotraumatic issues, deemed that “the system worked” in Seattle that day, and that it had a lot to do with the Steelers’ support of the system.

“The team was all-in”, he told King. “The coach was involved, and he was fully supportive of what the medical people were doing. He couldn’t have been more supportive”. About Roethlisberger, he said, “he put health and safety over the competition. Concussions sometimes can take a few minutes to appear, as in this case. Today the system worked. The humans worked”.

Let’s hope it not only continues to work, but gets better, so that we don’t see a repeat of the Case Keenum situation. You cannot trust a player to tell you how he really feels, as Keenum and Shazier showed. Even Roethlisberger’s admission no doubt is still looked down upon by some in locker rooms today, and that more than anything is what needs changed.