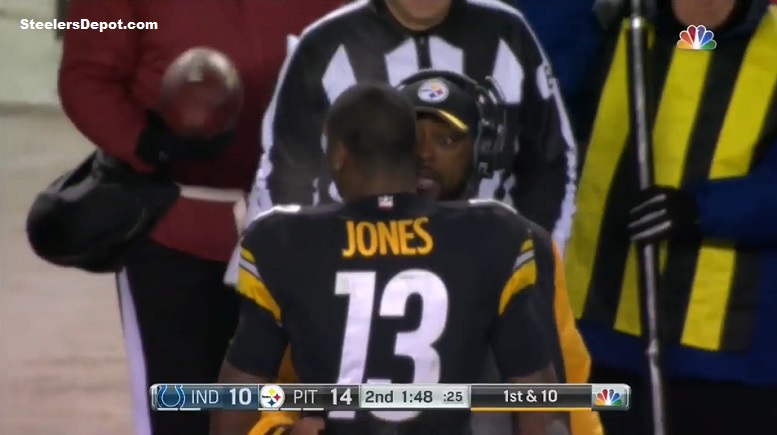 It has been a couple of games now since the Pittsburgh Steelers benched Jacoby Jones after he fumbled twice on returns against the Colts. The two fumbles—one of which he lost, on the opening kickoff—gave him three fumbles on about 15 or so returns in four games with his new team, after being afforded virtually every reasonable opportunity to carve out a role for himself.

The veteran return man earned the right to a second chance after he struggled in his first two games since joining the team, and it seemed that he had settled down in Seattle, when he averaged 29 yards on four kick returns coming out of the bye week.

But of course things took a sharp and pronounced turn for the worse the following week, and he was benched by halftime, with Markus Wheaton taking over the kick return duties and Antonio Brown resuming his position as punt returner, empathically so by returning one for a touchdown in the fourth quarter.

When the Steelers claimed Jones off waivers, they did so in a corresponding move that saw the release of Dri Archer, who had been their kick returner for the first half of the season. He was clearly the 53rd man on the roster, and you would have to think the same about Jones.

In fact, many, if not most, expected Jones to be released following the Colts game, but he remains on the roster. I expect that that will remain the case as long as everybody stays healthy, but if there is a notable injury that requires a roster move, he figures to be the one sent packing.

With Jones, the Steelers have six wide receivers, technically, on the roster, even if they have no intention of ever having him see the field on offense. He has not even gotten a helmet in the past two games since he was demoted from his kicking duties—to the third string in one case.

But with him, the fact of the matter is that they are not dressing two wide receivers every week, including rookie third-round draft pick Sammie Coates, as the Steelers primarily rely on their top three targets, with Darrius Heyward-Bey supplementing as a core special teamer, a blocker, and an occasional deep threat.

Jones is little more than dead weight, especially considering that Mike Tomlin explained the reason for his benching as that he couldn’t be trusted to catch and hold on to the ball. If you can’t trust your return man to do that, then you are never going to play him, and you are essentially going into games selecting from a 52-man roster.

Not that the Steelers have any pressing need to add a warm body at another position that they will just be sitting on the bench without a helmet. But if a need arises at, say the offensive line or the safety position, you can probably bet that Jones will be gone.